Please ensure Javascript is enabled for purposes of website accessibility
Log In Help Join The Motley Fool
Free Article Join Over 1 Million Premium Members And Get More In-Depth Stock Guidance and Research
By Alex Carchidi – Sep 20, 2020 at 7:15AM

These companies are certainly risky, but they might have what it takes to deliver serious growth for investors.

Traders on the Robinhood investing app are notorious for picking highly speculative stocks -- and as a group, they're too powerful to ignore if you're considering an investment in smaller biotech companies. Especially in the context of hot equities with millionaire-maker potential, hopping on the Robinhood bandwagon could be profitable. But you'll need to know which popular picks are worth holding for the long term, and which are likely to drop as soon as the Robinhood traders get bored.

All three of the biotechs I'll discuss today are in the top 100 most-held stocks by Robinhood traders, though only one is profitable. Make no mistake: These stocks are risky. Nonetheless, each of these companies has a few factors in its favor aside from being popular with retail traders, so if you're looking for a high-risk and high-reward stock to add to your portfolio, one of these might be worth buying. 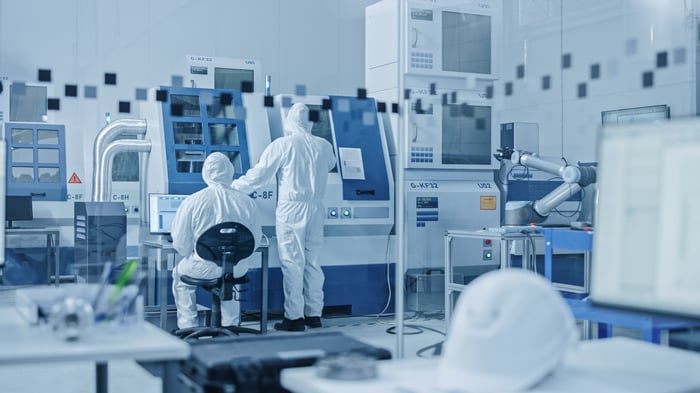 DNA-based medicine company Inovio Pharmaceuticals (INO -5.47%) has had a crazy year, exploding by more than 424% thanks to rampant speculation surrounding its coronavirus vaccine program. Amid multiple one-day price swings of 10% and more, the stock has proven highly unpredictable, with major announcements having no discernible impact. In fact, when the company released overwhelmingly favorable data regarding the effectiveness of its coronavirus vaccine candidate based on experiments in non-human primate models, the stock barely budged, contrary to what one would expect.

The same lack of growth remained when Inovio reported a handful of positive clinical trial updates for its clinical-stage glioblastoma (a form of cancer) and precancerous dysplasia projects in August. Eventually, the market may recognize the company's progress, but in the meantime, Robinhood traders may continue to invent large rallies out of thin air. Plan accordingly, and recognize that Inovio will continue to be a lottery-ticket stock until it has reliable revenues from product sales.

Outside of Robinhood, Catalyst Pharmaceuticals (CPRX -2.83%) is little-known. The company produces therapies for rare diseases including Lambert-Eaton myasthenic syndrome (LEMS), an autoimmune disorder. It's unclear why Catalyst stock appeals to Robinhood traders, given that it has shrunk by more than 10% this year. This contraction is likely a result of one of its phase 3 clinical trials failing to show sufficient benefit for its patients, leading the company to discontinue further development. Catalyst still has a handful of factors in its favor moving forward, however.

First, Catalyst is profitable thanks to sales of its drug amifampridine, which was approved for treating LEMS in 2019. Second, the company has less than $200,000 in debt, so it won't need to slow down its growth to focus on repayment. Finally, Catalyst's sales revenue will continue to rise as it commercializes amifampridine in new markets like Japan and Canada throughout next year. Regardless of how Robinhood trading may be affecting its price, Catalyst stock may not be cheap forever. 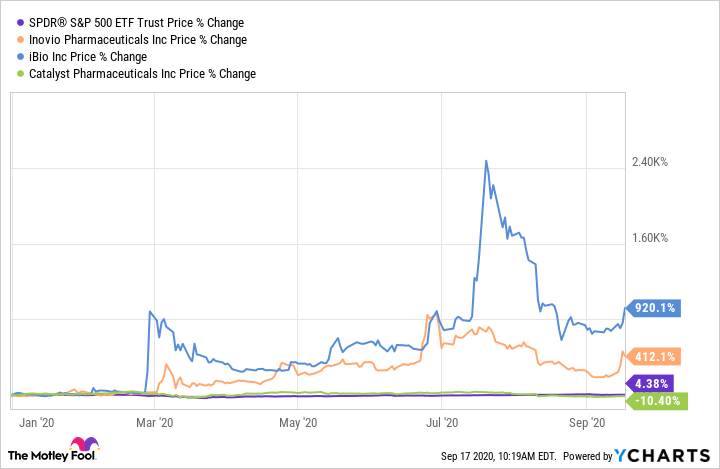 Though it doesn't have any products on the market yet, iBio (IBIO -8.59%) is notable for its unique biomanufacturing system that uses genetically engineered plants to produce vaccine components. According to the company, its plants are both faster and less expensive for vaccine prototyping than traditional manufacturing methods using bioreactors. Likewise, iBio claims that its plant-based manufacturing is easier to scale, less prone to contamination, and more environmentally friendly than the industry's standard. In total, the company's new approach could potentially be the start of a disruptive revolution in biopharma manufacturing, especially for highly complex and costly therapies.

Of course, Robinhood investors probably care more about the fact that iBio is developing a coronavirus vaccine than about its efforts toward creating new biomanufacturing methodologies. In the same vein, those investors are doubtlessly attracted to the stock's growth of more than 910% this year so far. If iBio's vaccine is proven to be effective, the company claims it can manufacture as many as 700 million doses in one year using its plants. There's just one catch: Its coronavirus inoculation isn't even in phase 1 clinical trials, and it might not be ready to start until early next year.

Still, iBio's manufacturing platform is undeniably attractive if it can do what the company claims, and management has been aggressive about pursuing new business in the form of contract manufacturing collaborations and preclinical development. This means that even if its coronavirus vaccine efforts don't pan out, iBio could still eventually turn a profit. Until then, investors could ride the wave of speculation -- or potentially wait for interest to subside before buying in.