The Dow Jones Industrial Average (DJINDICES:^DJI) tumbled on Monday, down 2.9% at 12:15 p.m. EDT. The possibility of renewed restrictions due to a second wave of COVID-19 and the lack of action from Congress on new stimulus measures could be contributing to the market's decline.

Microsoft (NASDAQ:MSFT) stock was down on Monday despite the tech giant announcing a multi-billion-dollar gaming acquisition ahead of the launch of its new gaming consoles. Meanwhile, shares of Walmart (NYSE:WMT) managed to rise as investors bet that the retailer would continue to do well in an uncertain economic environment. 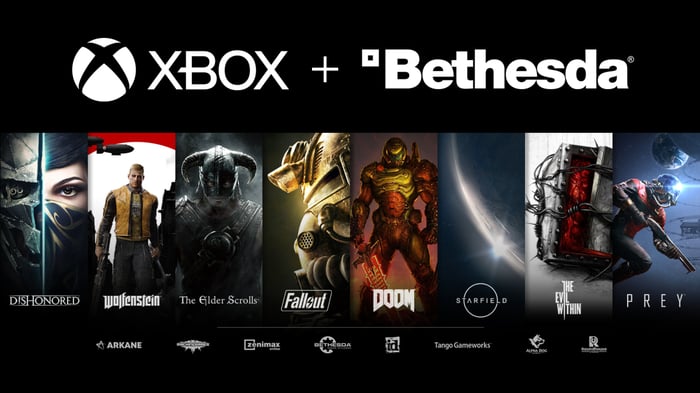 As the launch of Microsoft's new Xbox game consoles nears, the company is shelling out billions to strengthen its gaming ecosystem. Microsoft announced on Monday that it had agreed to acquire ZeniMax Media, the parent company of Bethesda Softworks and other game studios, for $7.5 billion in cash.

Bethesda is primarily known for its Fallout and Elder Scrolls series of games. As part of Microsoft, Bethesda's future games will all be available on launch day to Xbox Game Pass subscribers. Game Pass is Microsoft's subscription games service, providing access to over 100 games on Xbox and PC as well as cloud gaming on Android devices.

"This is an awesome time to be an Xbox fan. In the last 10 days alone, we've released details on our two new consoles which go on pre-order tomorrow, launched cloud gaming in Xbox Game Pass Ultimate, and now we're making another investment in the most critical part of our strategy: the games," said Microsoft gaming head Phil Spencer in a statement.

The deal is expected to close in the second half of Microsoft's fiscal 2021. It's unclear whether future Bethesda games will be available on non-Microsoft platforms like Sony's PlayStation. Microsoft's current-generation Xbox One console was badly outsold by Sony's PlayStation 4. This time around, exclusive games and an appealing subscription service help Microsoft's upcoming Xbox Series X and Series S consoles.

The Bethesda news didn't prevent Microsoft stock from slumping on a rough day for the markets. Shares of Microsoft were down around 0.6% by early afternoon.

As the major stock indexes were selling off hard on Monday, Walmart was the Dow's top performer. While the lack of additional economic stimulus will put pressure on the retailer's growth, there are some reasons to believe Walmart will do well if a second wave of COVID-19 hits the U.S. later this year.

Walmart's e-commerce business has boomed during the pandemic, facilitated by the company's investments in building out its online capabilities over the past few years. While Walmart is still far behind Amazon in e-commerce, the retailer grew its U.S. e-commerce sales by a whopping 97% in the second quarter.

Online grocery has been and will continue to be a big part of Walmart's e-commerce success. Grocery pick-up was popular even before the pandemic, and the company's new Walmart+ membership program offers free same-day delivery of groceries and select general merchandise. If stay-at-home orders are reimplemented due to a resurgence of COVID-19, Walmart is in prime position to grow its share of the grocery market.

Shares of Walmart were up about 0.4% by early Monday afternoon. The stock has gained roughly 14% so far this year.