The e-commerce giant is partnering with Echelon for a new Prime Bike.

Editor's note: Amazon has since denied any connection with the Prime Bike and says the product is not related to Prime in any way.

A week after Apple (AAPL 1.37%) announced that it would challenge Peloton (PTON 7.20%) in the home exercise market with Apple Fitness+, Amazon.com (AMZN 3.04%) is jumping in, too. The e-commerce juggernaut yesterday unveiled a new exercise bike, partnering with Echelon Fitness to introduce the EX-Prime Smart Connect Bike -- or simply the Prime Bike for short -- which resembles Echelon's other bike products but is priced at an aggressive $499.

Peloton will now have to compete with two of the biggest tech juggernauts on Earth in both sides of its business. 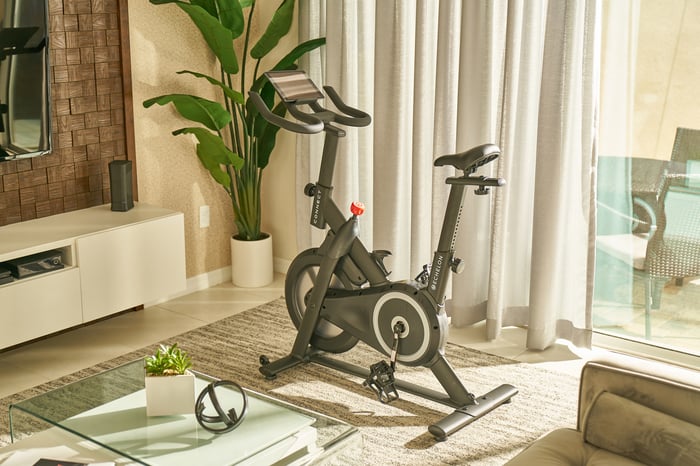 In characteristic Amazon fashion, the Prime Bike will undercut Peloton's Bike, which recently received a price cut to $1,895, by a significant margin. The Prime Bike will be sold exclusively to Prime members and include a 30-day free trial to Echelon's United Membership program, which offers a collection of live and on-demand workout classes led by professional instructors. That subscription normally costs $39.99 per month, effectively the same price as Peloton's $39 per month.

Echelon is relatively newer to the scene, launching its first connected bike in 2017, three years after Peloton shipped its first bike. Echelon's other bikes range from $1,000 to $2,000 and the company also offers other equipment like rowers.

The Prime Bike is Amazon's first connected fitness product, but the company has been expanding more into digital health offerings. The tech titan introduced the Amazon Halo last month, a $100 wearable wellness band that requires a $4-per-month subscription service to help with things like measuring body fat or analyzing sleep patterns.

Playing defense on both sides

Peloton has two main segments. Prime Bike will compete with Peloton's core Connected Fitness business, where the company sells its pricey equipment tied to a monthly subscription. Peloton is aware that its premium pricing strategy limits adoption of its offerings but has plans to make its equipment more affordable over time, starting with a refurbished program that it plans to launch within the next year.

The company's Digital Memberships are cheaper ($12.99 per month) and do not require any Peloton equipment. Apple isn't making an exercise bike (that we know of) and is only competing on this front with Apple Fitness+, which will require an Apple Watch for various types of integrations.

In other words, Peloton is going to have to play defense against Apple and Amazon on different sides of its business. Investors seem to be a little worried, sending shares down yesterday on the news.