The premium fitness specialist plans to make its platform more accessible over time.

By its own admission, one of the most significant limiting factors for Peloton's (PTON 26.53%) growth is the high price of its products. "We've long believed that our price points have represented one of the biggest barriers to the purchase of our products," CFO Jill Woodworth conceded on the earnings call last week.

In addition to offering financing plans that spread the cost out, Peloton recently expanded its product portfolio, dropping the price of its existing Bike and introducing a cheaper Tread. Here are two more ways that Peloton will make its equipment more affordable, which will broaden the user base and help drive future growth. 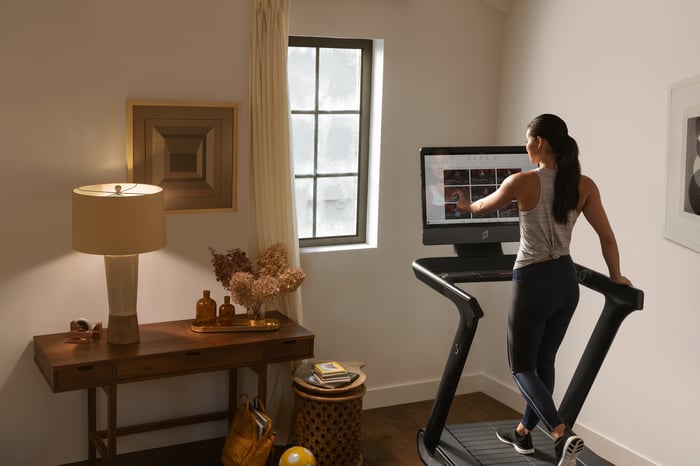 A refurbished program is coming

As part of the recent product announcements, Peloton introduced a new Bike trade-in program available to customers that are interested in upgrading to the new Bike+, offering existing users a $700 credit along with a bundle of accessories.

"We were able to make this compelling offer because of our incredible logistics platform and partners who are able to perform reverse logistics at scale," Woodworth added. "Please note that the buyback program does not impact the P&L, only the balance sheet."

That's a flat amount for all Bikes regardless of when they were purchased, which some relatively recent buyers found off-putting. Generally speaking, customer backlash is inevitable after a meaningful price cut for any product.

$700 credit to trade in a $2,250 bike that was delivered just over 3 months ago?! Wow! Peloton should rethink that and offer a sliding scale. $700 for a bike that is 3-4 years old sounds great but not for one purchased less than 6 months ago!

Criticisms aside, the flip side of that program is that Peloton will end up taking back a bunch of used Bikes. What will the fitness tech company do with all that gear? According to management, Peloton has plans to create a certified pre-owned (CPO) program "in the coming year." Trade-in programs, combined with CPO and refurbished offerings, are a time-tested way for companies to incentivize upgrades while offering used products at lower prices.

Further out, CEO John Foley suggested in an interview with CNBC that Peloton will likely introduce an option for customers to rent equipment. Such an offering wouldn't come anytime soon, but instead would probably be available within the next five to 10 years in order to further improve affordability, according to the chief executive.

Somewhat related to affordability is value perception. Foley pointed to increased engagement with the platform, which saw average workouts per subscriber jump from 12 per month to nearly 25 over the past year. At $39 per month (before equipment costs) for the subscription, that translates into a little over $1.50 per workout, which Foley called "just insane value."

Is Peloton Still a Growth Stock? These 2 Numbers Hold the Answer
401%