These big pharma companies are surviving the pandemic, and their solid dividends and consistent growth should help them do well in the next recession.

If you want to survive the next stock market crash, you have to think big -- as in huge pharmaceutical companies such as Johnson & Johnson (JNJ 0.08%), AbbVie (ABBV 1.26%), and Eli Lilly (LLY 1.20%). These healthcare companies have the staying power and attractive dividends to keep rolling.

AbbVie stock is about flat year to date, and while it had a brief dip when the recession first hit, the recovery of its share price was quick. Johnson & Johnson, down 1% this year, and Eli Lilly, up more than 14% for 2020, had similar speedy comebacks.

One caveat: Just because a company survived this year's pandemic intact doesn't mean it will come out of the next recession unscathed. A different financial dynamic is at work in every recession, and it's not always one you can see coming. But knowing there will be unknowns, it makes sense to look at companies with steady, balanced growth and secure dividends. 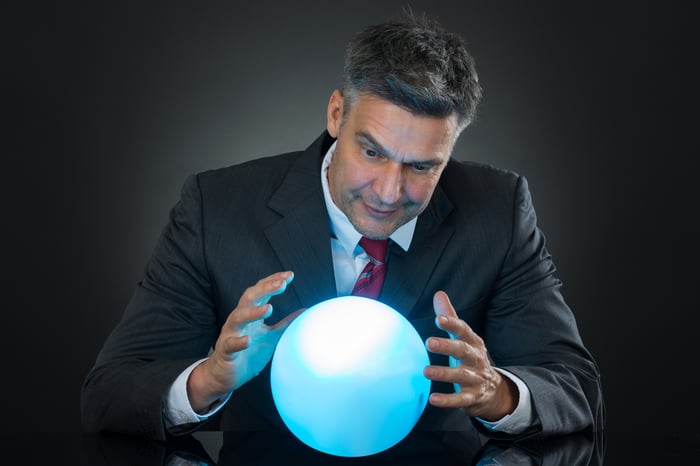 Johnson & Johnson: As consistent as they come

Johnson & Johnson is a Dividend King with a history of increasing its dividend for 58 consecutive years, including a 6.3% raise this year to $1.01 a share, giving it a 2.8% yield.

It operates in three segments: medical devices, consumer health, and pharmaceuticals. This year, the first two divisions have struggled because of the pandemic, primarily because the number of elective surgeries has dropped dramatically. But its pharmaceutical division led the way with a reported $10.8 billion in sales in the second quarter, up 2.1%, year over year. Overall, the company's sales were a reported $39 billion in the first six months, down 3.8% year over year, but it's easy to see how they will bounce back when the pandemic subsides.

In the meantime, Johnson & Johnson has a COVID-19 vaccine candidate that was expected to start phase 2 trials in Spain, the Netherlands, and Germany this week. The company says it hopes to have its vaccine ready by early 2021.

Eli Lilly raised its dividend this year for the seventh consecutive year, to $0.74 per share, giving it a yield of 1.96%.

The company has had a good year with the U.S. Food and Drug Administration (FDA), including approvals for lung cancer drug Retevmo; artificial insulin product Lyumjev; and Tauvid, a radioactive agent that helps diagnose Alzheimer's.

The company also got new indications for anti-inflammatory drug Taltz and cancer drug Cyramza, plus positive phase 3 data for Trulicity for reducing average blood glucose levels and body weight in people with type 2 diabetes. Trulicity, already used to help type 2 diabetes patients control their blood sugar, is the company's biggest seller, pulling in $2.5 billion in the first six months, a rise of 29% over the same period in 2019.

Like Johnson & Johnson, Eli Lilly is trying to have an impact in the fight against COVID-19. Last week, the company announced positive data from a phase 2 trial of its antibody drug LY-CoV555 in reducing the severity of coronavirus. 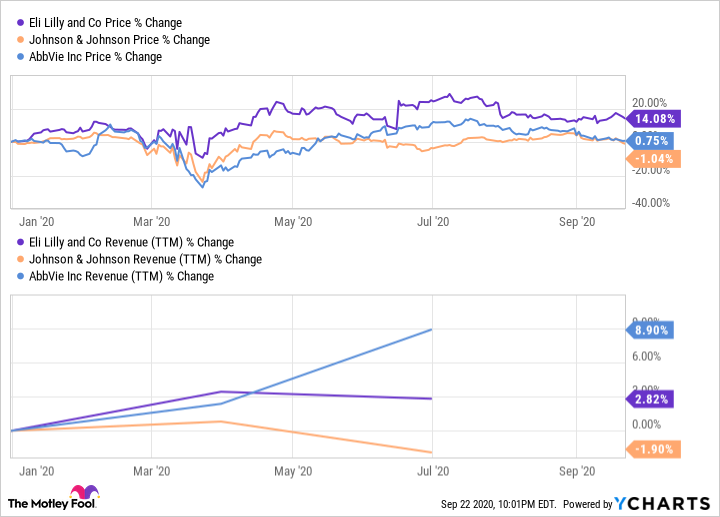 AbbVie is a Dividend Aristocrat with 46 consecutive years of dividend growth, counting its time as part of Abbott Labs. Since it spun off from Abbott in 2013, the company has increased its quarterly dividend by 195%, including a bump of 10% this year to $1.18 a share. The yield on the dividend is currently 5.3%, which is pretty good considering the company's stated double-digit earnings growth rate the past five years. Its reported revenue in the first six months of the year was $19 billion, up 18.4% year over year, though that counts funds gained with the completed purchase of Allergan.

That purchase will help AbbVie expand its pipeline to survive increasing biosimilar competition for anti-inflammation therapy Humira, which is the world's top-selling drug. But the company also has a big seller in cancer drug Imbruvica, which brought in $2.5 billion the first six months of 2020. The fastest-rising drugs for AbbVie are psoriasis drug Skyrizi and rheumatoid arthritis therapy Rinvoq.

Like Eli Lilly and Johnson & Johnson, AbbVie has its own COVID-19 drug in the works, a collaborative effort with several other groups to develop a novel antibody therapeutic to fight the virus.

They're all the right decision

I like all three stocks, especially with all the recent fluctuations in the market, because they're safe and attractive to dividend investors. Plus, at this point, I think they're undervalued by the market.

I like AbbVie the best because of its rise in revenue. The expected decline of Humira sales presents some risk, but AbbVie has the most attractive dividend -- one that appears safe, with a trailing-12-month payout ratio of 47.5%.

Johnson & Johnson has more diversity, which in a way has hurt it during the pandemic, but in the long run this may make it the safest stock of the three. However, there is some concern since its dividend payout ratio is relatively high at 58.2% on a TTM basis. Eli Lilly has the lowest dividend yield of the three, but the dividend is safer, with a TTM payout ratio of 48.2%. It also may have the most midterm growth of the trio based on its pipeline.