B&G Foods has benefited along with peers from increased eating at home amid COVID-19, but does that make the stock a buy?

The coronavirus pandemic has upended major industries as economic shutdowns and social distancing change consumer habits. For example, packaged food makers like B&G Foods (BGS 0.34%) have benefited now that more people are eating at home. With a generous 6.8% dividend yield, income investors may be attracted to this name, but make sure you know what you are buying.

Here are four charts to help you understand B&G Foods.

A different approach to packaged foods

When most people think about a packaged food company, giants like General Mills (GIS -2.68%) or Mondelez International (MDLZ -0.10%) probably come to mind. These consumer staples companies are built on well-known brands and use their marketing and distribution strength to gain clout with retailers and attract consumers.

B&G Foods goes about things in a very different way, generally buying smaller and lagging brands, often from its larger peers, and then giving them the attention they lacked under previous management. B&G's distribution and marketing strength are important factors, but the real key is that, as a relatively small company, it can better focus its attention on brands that have gotten lost in the shuffle at larger companies or that were previously owned by even smaller industry entrants.

There's an important difference here in the way B&G grows its business since acquisitions are an important part of the process. Those purchases are generally funded with debt, which can help to boost returns when times are flush, but can also be a heavy burden when times are bad. Prior to the efforts to slow the spread of COVID-19, packaged food was a competitive but fairly predictable business to be in. Which brings up the first chart: 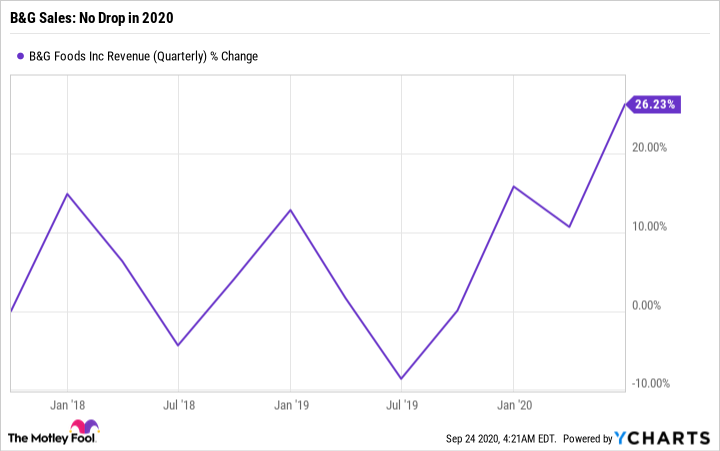 You can clearly see the seasonality of B&G Foods' business in the ups and downs in 2018 and 2019. Only in 2020, the trend changed with sales ticking higher in the second quarter. Although that's great news for B&G Foods and its investors, it is not the historical norm and is likely driven almost entirely by the impact of COVID-19 on consumer buying habits. B&G's recent results will be an aberration if the trend should revert back to more normal levels, which is not an unreasonable expectation if (more likely when) a successful COVID-19 vaccine is developed. So times are flush today, but expecting that to continue indefinitely into the future probably isn't the best call. 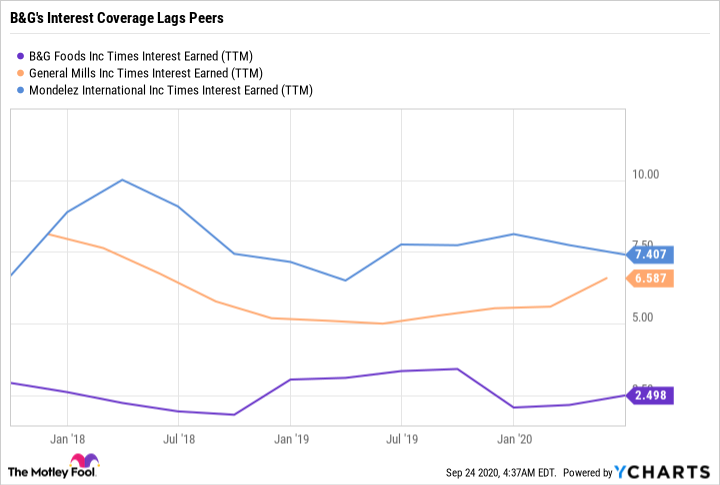 How big a deal would a reversal be? A quick look at the chart above will help. At the end of the second quarter, B&G covered its trailing interest expenses roughly 2.5 times over. General Mills, which is working through its $8 billion acquisition of pet food brand Blue Buffalo, was at about 6.6 times. Mondelez, which made a $1.2 billion acquisition in April, stood at 7.4 times. B&G's wiggle room is much narrower. 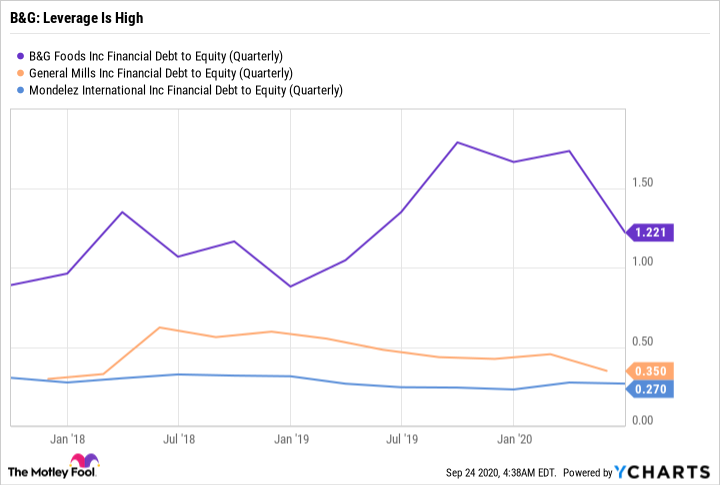 B&G's relatively weak interest coverage, however, is really just a symptom of a bigger issue: leverage. As the chart above shows, B&G's debt-to-equity ratio of roughly 1.22 is far above that of General Mills and Mondelez, which sit at 0.35 and 0.27, respectively. A heavily leveraged balance sheet can amplify returns in good years, but it can severely limit a company's options in bad years. This is a material risk that more conservative dividend investors need to consider. 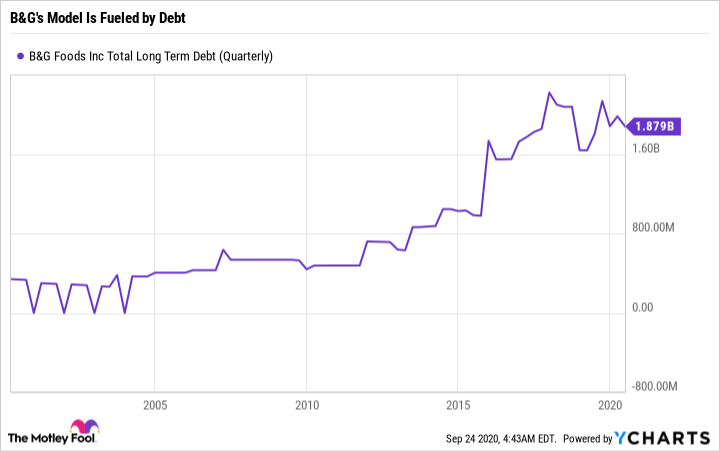 Which brings up the last chart, showing the long-term trend for B&G's debt. Since its business model is to use debt-funded acquisitions to grow, the graph above shouldn't be much of a surprise. However, it's also highly unlikely that B&G will suddenly change the way it operates. So expect leverage to remain high, debt to keep growing as it makes more deals, and interest expense to be higher than with its larger peers.

The good performance at B&G Foods lately needs to be juxtaposed against the bigger picture. This isn't to suggest that B&G is a bad company, only that its leveraged business model comes with material risks that you won't find (at least to the same degree) at many other packaged food companies.

The packaged food area is often viewed as stable and conservative, but investors drawn in by B&G's strong first-half results and big yield should step back and realize that this is not your typical packaged food name. Make sure you know what you are buying before you step aboard; there's more risk here than you may think.