Looking for a company that's riding on the wave of digitalization spurred on by COVID-19? This could just be it.

It's not always easy to decide on a company to invest in. The COVID-19 pandemic has resulted in many attractive investing opportunities surfacing as lockdowns and movement-control restrictions curtail spending and send many businesses into a tailspin. However, cheap stocks may not always be bargains, as their business models may have been irreversibly altered for the worse due to the crisis.

The attributes I would look out for in a great investment would include: a company with a large total addressable market and a long runway for growth, a dominant player within its industry, and one with clear catalysts for expanding its reach and market share. It would be even more ideal if the company had an excellent management team that's adept at allocating capital most efficiently.

After sifting through many candidates, I believe this company fits the bill for the one stock I would buy. 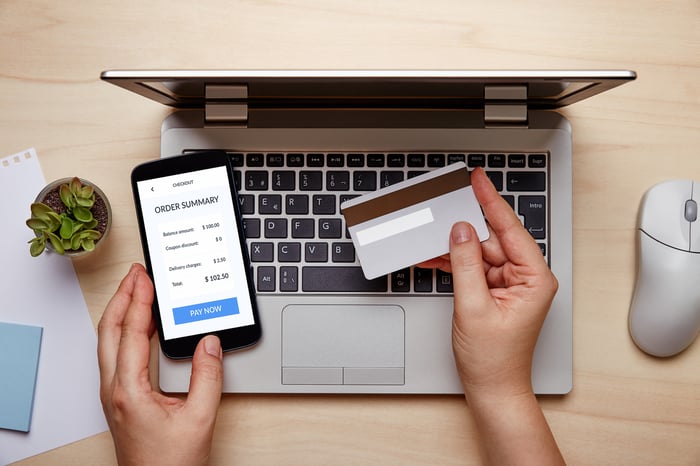 MercadoLibre (MELI 0.02%) hosts an e-commerce and payments platform in Latin America. The company has a presence in 18 countries within South and Central America, but derives the bulk of its revenue from three countries: Brazil, Argentina, and Mexico. MercadoLibre is the dominant e-commerce player in the region and has multiple retailer solutions such as MercadoLibre Marketplace (an online platform for the buying and selling of merchandise), Mercado Pago (an online payments solution) and Mercado Envios (a logistics solution).

The company's market-leading position boasts a strong network effect that has allowed it to grow its registered user base as well as its gross merchandise volume (GMV). In 2015, MercadoLibre had around 145 million registered users, but this more than doubled to 321 million by 2019. GMV has also almost doubled from $7.2 billion to $14 billion over the same period.

MercadoLibre was already on a strong growth trajectory before the pandemic engulfed the world. The company was savvy in introducing new and useful services over the years to solve users' pain points, and its suite of services made customers stickier toward its platform. Hosting an integrated e-commerce and payments platform meant a virtuous cycle of new vendors and users coming on board over time, thus boosting the company's GMV even further.

The pandemic has accelerated the shift toward digital transactions and created even stronger tailwinds for the company. MercadoLibre analyzed data obtained in the early stages of the pandemic that pointed to encouraging trends. Purchase frequency significantly increased in all of its buyer segments, while there has also been more adoption of online financial services such as wire transfers for their ease of use. This data only pertained to the February to May period, so the acceleration could have been much more rapid in recent months as the virus increased its reach around the world.

MercadoLibre looks determined to continue growing its market share in a region that's still low on internet and e-commerce penetration. Although its growth has been phenomenal over the last decade, I believe the company may be on the cusp of even stronger growth due to the rapid digitalization by businesses and individuals.

Although the company made a net loss in its last two fiscal years, 2018 and 2019, this was because it spent a lot on marketing, building its platform capabilities, and providing rebates and benefits to users and vendors. In other words, management is willing to suffer short-term pain in exchange for long-term gain.

The company also recently approved a share repurchase program, the first time it has done so. Although the company has yet to buy back any shares, the presence of this option shows that management is considering different methods of enhancing shareholder value, which is yet another positive.