Investors considering these carriers today need to weigh their responses to COVID-19, their cash burn, and their overall financial health.

The gradual reopening of the U.S. economy coupled with the harsh reality that the COVID-19 pandemic is far from over has put airlines in a difficult spot. Their challenge: to make the travel experience as safe as possible and spark a recovery in air traffic without jeopardizing passenger health.

Analyzing how two of the industry's largest players, Delta Air Lines (DAL 0.34%) and United Airlines (UAL 1.98%), are responding to that challenge, and taking a look at each airline's cash burn and balance sheet, can help investors determine which airline is the better buy right now.

Both United and Delta have ratcheted up their efforts to reduce the odds that the coronavirus will spread on their planes or elsewhere within their operations -- and in many ways, the safety and hygiene measures they've taken are similar.

The United CleanPlus and Delta CareStandard programs aim to make the entire flying experience safer, reducing the number of physical touchpoints that passengers are exposed to by encouraging them to use apps for tasks previously done mostly in-person. Both airlines have installed plexiglass shields to serve as buffers between gate workers and passengers. On their planes, both use HEPA filters to recirculate cabin air with outside air.

It's hard to quantify the impact these safety measures are having for either airline. For now, investors should note that Delta and United are implementing meaningful solutions that can improve their businesses right now, instead of waiting idly by for the widespread distribution of a vaccine.

While their approaches to safety before boarding are similar, Delta seems to gain an edge when it comes to inflight anti-virus hygiene. Unlike United, which disinfects most aircraft using electrostatic sprays before departure, all Delta flights are sanitized prior to boarding. And although both airlines have instituted protocols under which passengers board each aircraft gradually, are encouraged to socially distance, and are required to wear masks inflight, United doesn't have a capacity cap. The lack of a capacity cap is the biggest difference between United and Delta.

Delta's policy, which simply blocks the middle seat in each row, is a hard and fast way to ensure capacity is capped at two-thirds. Its initial plan was to do that through Sept. 30, but it has since extended the period when it won't fill those seats until at least Jan. 6, 2021.

Both airlines are making impressive efforts to reduce the risks of flying for their customers, but Delta is going the extra mile. It will likely be some time before we can begin to measure what impact (if any) those moves have on customer loyalty to the brands or public perception of them. For now, though, there are two main ways to gauge an airline's health -- its daily cash burn and its balance sheet.

Since March, daily cash burn has been a heavily monitored statistic in this industry. Airlines were blindsided by the pandemic, and the woefully unprepared businesses suffered tremendous losses in its first few months. Delta has since trimmed its daily cash burn, and brought it down to an average of $43 million during the second quarter. It's currently burning about $750 million a month, or $25 million a day. Although United had a lower second-quarter average daily cash burn of $40 million, it too, expects third-quarter daily cash burn to average $25 million. In short, both airlines are losing money at about the same pace right now. 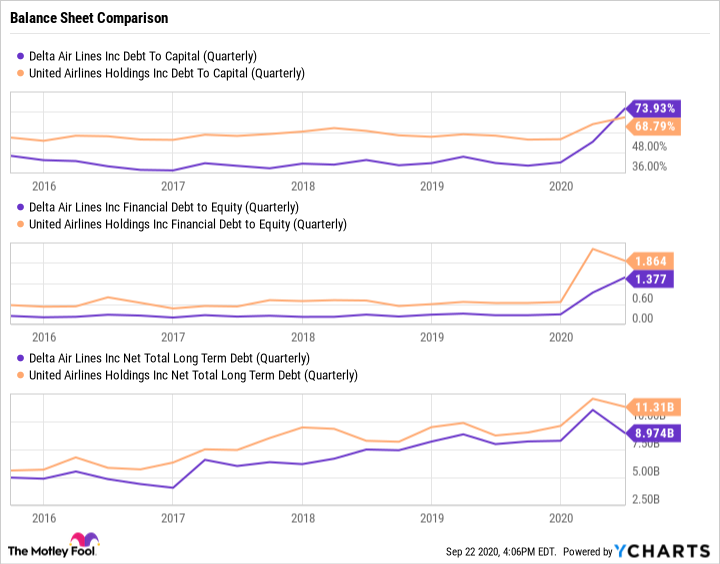 Delta's decision to keep its capacity caps in place and its policy of sanitizing all flights prior to boarding give it an edge over United when it comes to how they're responding to COVID-19. Both companies are burning through about the same amount of cash, making that category a tie. Even though Delta has ramped up its leverage considerably further than United has so far this year, it still finds itself with a healthier balance sheet overall. Delta's ability to secure more debt at lower interest rates than United gives it an edge in that category as well. Both have their fair share of risks, but Delta is the better airline stock to buy at this time.