One of the two top solar stocks looks like a better buy.

The two top solar companies, First Solar (FSLR -1.31%) and Canadian Solar (CSIQ -1.16%), have many things in common. Both listed on the public markets at around the same time. Each company generated annual revenue of roughly $3 billion last year. Moreover, both companies primarily sell solar modules, develop as well as operate solar power systems, and provide related services. Let's take a look at why, despite these similarities, one offers a better investment opportunity than the other.

Canadian Solar has operations in 23 countries. In 2019, the company earned 44% of its revenues from the Americas, 32% from Asia, and 24% from Europe and other regions. By contrast, First Solar earned 87% of its 2019 revenue from the U.S. Clearly, Canadian Solar is more geographically diversified than First Solar. That should make Canadian Solar's revenues relatively stable if any one market faces headwinds. It also gives Canadian Solar an advantage in new markets where it has already made headway.

In addition to geographic diversification, Canadian Solar is also working on diversifying its products and services. It has an early mover advantage in the rapidly growing energy storage solutions market. Energy storage solutions enable better alignment of energy delivery with demand, and thus improve a system's overall value. This enhances solar energy's prospects compared to traditional ways of energy generation, which can be easily adjusted based on demand.

Canadian Solar has a storage projects backlog of 1,201 megawatt-hours (MWh), in addition to a pipeline of 3,482 MWh. So, Canadian Solar appears to have an edge over First Solar in terms of diversification. 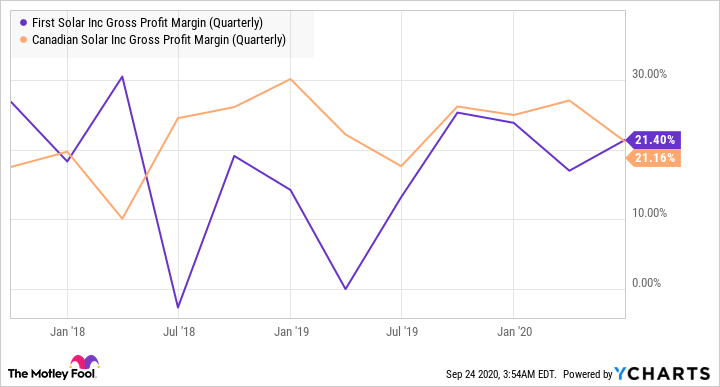 Both companies fared relatively well in the second quarter, considering the impacts of the coronavirus on global energy demand. While both have withdrawn their respective financial guidance for 2020 due to coronavirus-related uncertainties, they have provided production guidance for the year. Canadian Solar expects its module shipments to rise 28% to 40% in 2020, while First Solar expects its production to rise 4%.

When it comes to balance sheet strength, though, First Solar wins hands down. The company is less leveraged than Canadian Solar. 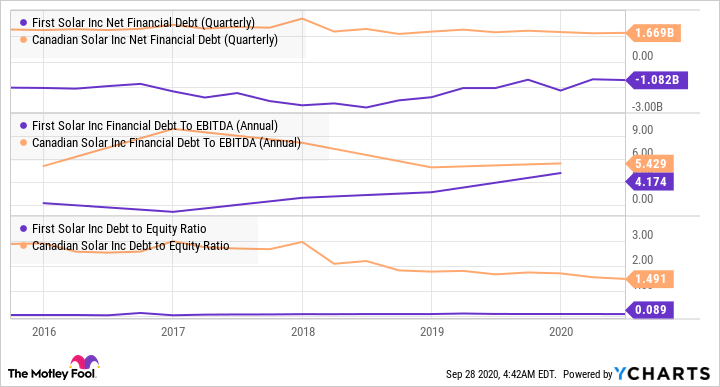 Further, Canadian Solar plans to grow by accessing low-cost capital from the Chinese stock market through an IPO. It plans to use the capital to expand its capacity and increase the level of vertical integration. That should, in turn, help Canadian Solar enhance its pricing power and increase its global market share.

Overall, Canadian Solar's global operations, rapid growth over the years supported by debt, and planned listing in China all hint toward its slightly aggressive growth strategy compared to First Solar. However, the debt level currently is not concerning and the revenue growth over the years is impressive.

Using any metric, Canadian Solar is trading at a much cheaper valuation compared to First Solar. 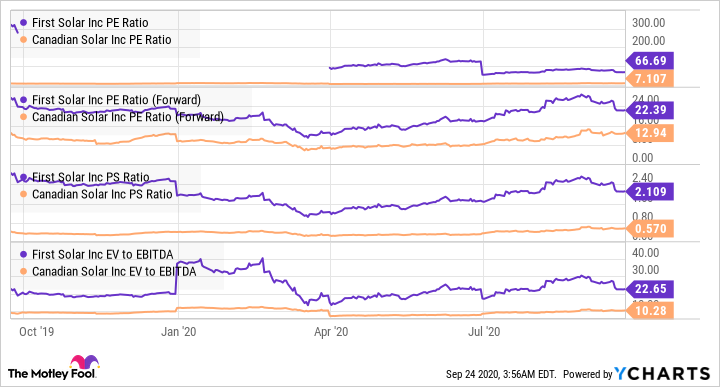 At a forward PE ratio of around 13 times, Canadian Solar looks attractively valued. The stock sure seems to have some potential for multiple expansion to fill the valuation gap, as seen in the chart above.

While the longer-term potential for solar power is indisputable, solar stocks face stiff competition that may result in a fall in market shares and increased pressure on margins. Though both the companies have performed well in a competitive market, Canadian Solar's diversification, growth over the years, growth plans, and cheaper valuation make it a better buy than First Solar today.