COVID-19 has killed at least one million people globally, and an increase in cases could send oil demand falling again.

Oil prices are falling sharply again, with both Brent and West Texas Intermediate (WTI) crude futures down more than 4% on Sept. 29. At this writing, Brent November deliveries are priced at $40.63 per barrel, while WTI November deliveries have fallen to $38.67 per barrel. While there isn't one single thing behind today's sharp decline, there's a lot of uncertainty driving traders' decisions. Global cases of COVID-19 are on the rise, and the global death toll has now surpassed 1 million people.

In recent weeks, most of the news in the oil patch hasn't been particularly good for oil prices, and volatility and worries about continued oversupply and weakening demand are pushing crude lower. Oil stocks are taking a beating, with the Energy Select Sector SPDR ETF (XLE -0.54%) down 3.1%. Oil producers and oilfield service and equipment providers, in particular, are taking it on the chin, with the SPDR S&P Oil & Gas Exploration & Production ETF (XOP -0.47%) and the SPDR S&P Oil & Gas Equipment & Services ETF (XES 1.77%) down 3.9% and 4.2%, respectively. 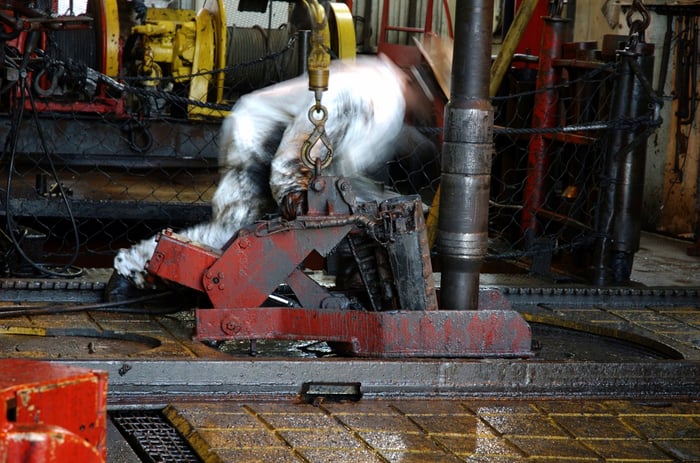 Earlier this month, Saudi Arabia shifted its focus back toward the U.S. and Asia, lowering crude prices for refining customers in both markets. This was the first time since before the coronavirus pandemic the petro giant discounted crude to the U.S. -- a clear salvo at U.S. shale producers to hold off on boosting output. China soaked up an enormous amount of heavily discounted crude in the second quarter, but purchases fell off in the second quarter as Chinese ports filled with oil tankers waiting for weeks to offload shipments.

Libya also recently returned to the international oil market. Most of its oil industry has been shuttered this year due to internal strife, but a recent agreement has reopened its oil exports, and the country could bring as much as 1 million barrels of oil per day back to the market as it ramps its production back up.

Weakening demand coming on top of the seasonal turn lower

A summer peak demand season that was still below last year's levels by double digits has come to an end, and in the U.S., in particular, this could weigh on producers. The industry did consume some of its oversupply over the summer, but the combination of the usual seasonal turn lower, along with the risks of a surge in COVID-19 cases further weighing on demand, could keep oil prices weak for the foreseeable future.

As a result, independent oil producers have the most to lose, and investors are selling on those weakening prospects. Shares of independent oil producers WPX Energy (WPX), Devon Energy (DVN 0.36%) -- which agreed to merge with WPX just yesterday -- and Apache Corp (APA 0.83%) are all down more than 7% at this writing. The threats of weak prices and demand aren't impacting only independents. Integrated global giant ExxonMobil Corp (NYSE:XOM) shares are down over 3% today.

The energy sector and these individual stocks are all still down by more than half this year: 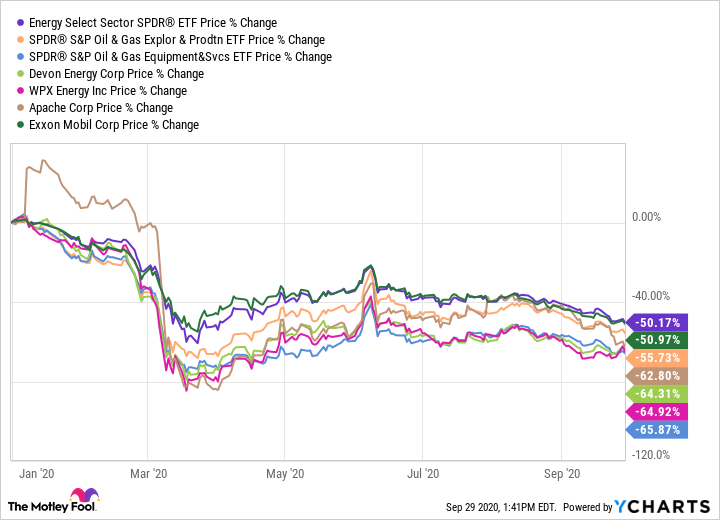 Waiting for the next shoe to drop

Today's decline comes ahead of the afternoon release of the American Petroleum Institute's weekly crude oil inventory report, which measures the amount of oil and refined products in commercial storage in the U.S. Demand for refined products improved over the summer but never really showed any big momentum. This would have indicated the strong recovery the industry needs for prices to move higher in a meaningful way.

The big fear is that after a slow-but-steady decline in excess inventories over the summer, the seasonal decline in demand, along with global heavyweights that can produce oil for single-digit prices acting to soak up more market share, could result in inventories growing again, a dangerous signal that producers could be forced to cut output again or risk sending already-unprofitable oil prices to levels that nobody but OPEC producers can operate at for a sustained period.

Put it all together, and it's not a great time to be in the oil business, and investors should continue to step lightly.