United Natural Foods (NASDAQ:UNFI) shares were down 12.4% as of 1:10 p.m. EDT Tuesday, even after the grocery distributor reported better than expected earnings and revenue for its fiscal fourth quarter, which ended Aug. 1.

The company's net comparable sales increased by 8%, and its net income more than tripled compared to the year-ago period. "Fiscal 2020 was a monumental year for UNFI as the demonstrated flexibility and strength of our supply chain network," said Chief Executive Officer and Chairman Steven Spinner in the earnings release. 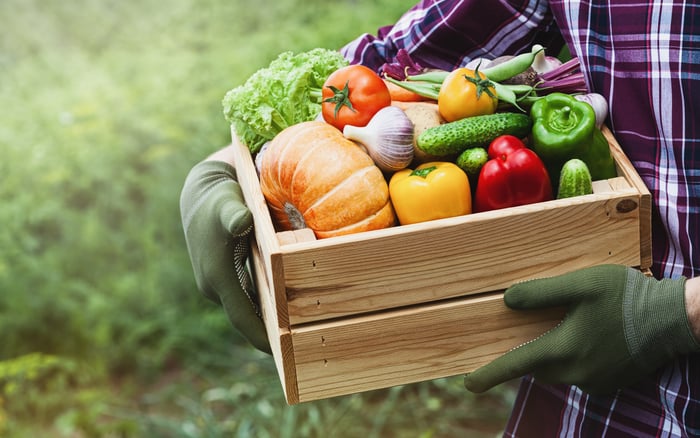 The company also announced today that Spinner plans to retire when his employment agreement ends on July 31, 2021 -- or possibly sooner, depending on when his successor is chosen. Spinner has been CEO since 2008.

United Natural Foods has evolved from an early organic grocery supplier into the largest publicly traded wholesale distributor of "healthier" foods in the U.S. and Canada. It has almost 50 distribution centers, and delivers consumer staples to natural and organic grocers, as well as conventional supermarkets.

Tuesday's stock drop follows a doubling of the share price since the start of 2020. Stronger grocery sales stemming from reactions to the COVID-19 pandemic produced record adjusted earnings before interest, taxes, depreciation, and amortization (EBITDA) for the company in fiscal 2020.

Investors are likely cashing now in on those year-to-date gains, as well as reacting to the news of the CEO retirement. The company also provided guidance that it said "assumes that food-at-home consumption remains elevated and exceeds food consumed away from home for the rest of fiscal 2021." Investors may be questioning this assumption, based on the hope that the arrival of effective COVID-19 vaccines will lead people to return to their pre-pandemic  consumption patterns within the next year.