Should investors buy or are the Disney bulls merely wishing upon a star?

As the COVID-19 pandemic continues to dominate the public's attention, some investors might be wondering if Walt Disney (DIS -2.21%) is a good stock to consider right now. After all, Disney is an entertainment giant. Consumers seem to have a lot more time and need for entertainment these days as social distancing and lockdowns keep more people at home and looking for something to do.

However, the Disney conglomerate is much more than theme parks, movies, or even old Mickey Mouse cartoons. And this media stock's performance often does not properly coincide with the actual condition of the overall company, especially of late.

To answer whether Disney is a good pandemic stock, it's going to require looking at the company overall as well as how it performed compared to the S&P 500. 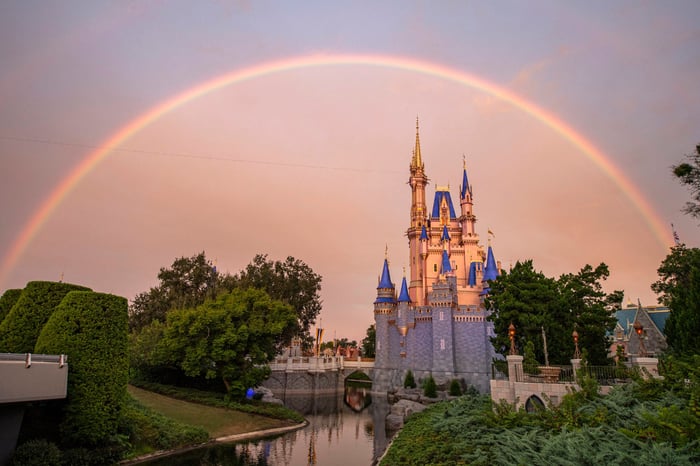 The Disney conglomerate and the pandemic

Many think of Disney for its media content, stores, and theme parks. However, Disney is a media conglomerate made up of four divisions. They are:

Not surprisingly, divisions not directly tied to its content suffered enormously. In the most recent quarter, overall revenue fell by 42% from the year-ago quarter, and the company reported a loss of $2.61 per diluted share.

Perhaps no division has endured more pain in 2020 than Disney's parks, experiences, and products segment. The theme parks are operating at limited capacity if they have opened at all, and its fleet of cruise ships will not be operating until at least early December. In the previous quarter, year-over-year revenue fell by an astounding 85%.

Studio entertainment has also had a tough go of it. The pandemic suspended production on most movies. Also, movie theaters are only now beginning to partially reopen. Still, this is at a reduced capacity as much of the public continues to stay away from enclosed public spaces. Due to these conditions, the company released its live-action remake of Mulan straight to Disney+ for an added rental cost of $29.99. This strategy probably led to lower revenue for the film. For the overall division, revenue is down by 55% from the same quarter last year.

Media networks' revenue declined by 2%. The DTCI division saw only a 2% increase in revenue. This is the one division that fared relatively well during the pandemic, and its growth may have helped Disney stock overall. Unfortunately, it made up only about 19% of company revenues in the latest quarter.

The state of Disney stock

The S&P 500 has managed to return to its pre-pandemic highs set in mid-February. The same cannot be said for Disney stock as lower theme park attendance and the lack of movie releases have taken a toll on the company's revenue and dampened investor interest. 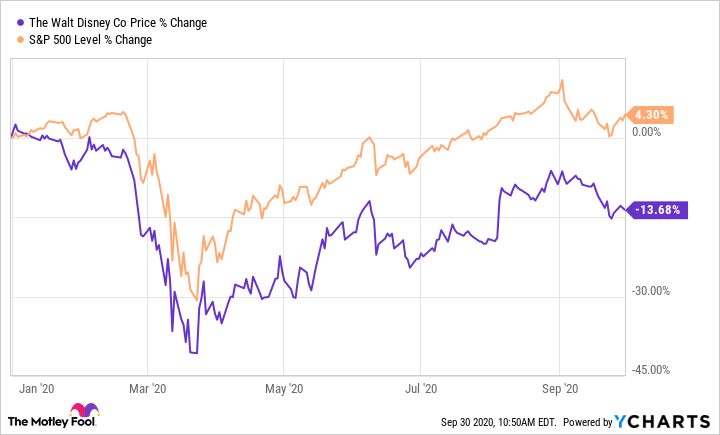 However, it would not be correct to say that all these troubles have made Disney stock a bargain. Although Disney stock is not trading at its pre-pandemic high in February, it has risen substantially from its March lows. The rising stock price and the reduced earnings have taken Disney's forward P/E ratio to around 47.

Admittedly, the rising stock price likely speaks to the success of the company's streaming services. Nonetheless, what makes Disney stock a poor barometer of the overall company is the disproportionate influence that Disney's media properties seem to have on the stock price.

This is nothing new. In 2015, when cord-cutting reached a fever pitch and both the Disney Channel and ESPN began to lose subscribers, the growth of Disney stock stalled. As a result, the stock traded in a range for years. It was only after the company set a launch date for Disney+ in April 2019 that Disney resumed its move higher.

Disney is not a good pandemic stock

Given these realities, Disney stock is unlikely to make any investor dreams come true immediately. The stock trades at a heightened valuation despite underperforming the S&P 500, and the pandemic has dramatically reduced revenue in two of its four divisions.

Due to the current state of the stock, Disney investors face a conundrum. Given the extent of its media properties, many believe Disney holds the most valuable content library anywhere. Moreover, once the pandemic ends, customers will probably return to theaters and theme parks in large numbers. This should mean that Disney stock will remain a winner in the long term.

Nonetheless, that speaks to its post-pandemic potential. Considering the current valuation, Disney stock is not adequately pricing in the uncertainty surrounding its amusement parks, which currently deliver little happiness, and the travel business, which currently is not cruising. Until the pandemic situation changes, new buyers should not entertain a Disney purchase.