Please ensure Javascript is enabled for purposes of website accessibility
Log In Help Join The Motley Fool
Free Article Join Over 1 Million Premium Members And Get More In-Depth Stock Guidance and Research
By Lee Samaha – Oct 1, 2020 at 7:05AM

The dividend looks sustainable and the market may be overly discounting the stock.

Emerson Electric (EMR 3.63%) has raised its dividend every year for the last 64 years and it looks highly likely that it will be able to continue raising it for the foreseeable future. Sporting a 3.1% yield as of this writing, the stock is a very good fit for income-seeking investors and it also looks undervalued right now. Here's why.

The key arguments are as follows: 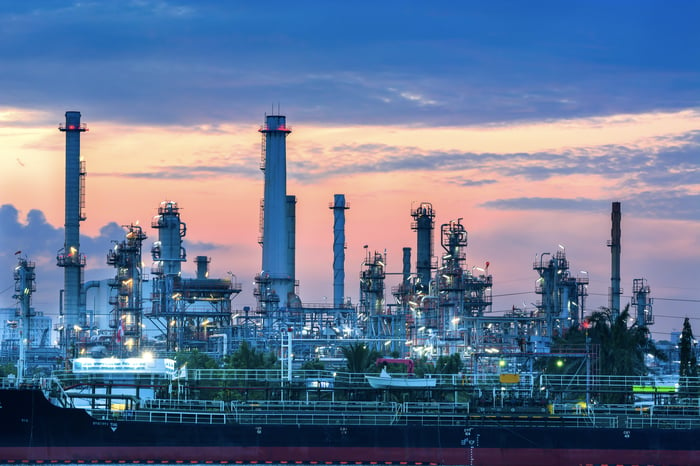 Emerson Electric is reliant on spending from heavy industries such as oil. Image source: Getty Images.

The company's FCF resiliency and ability to pay its dividend can be seen in the chart below, as free cash flow tops the dividend payment. What's more, management is forecasting FCF of $2.25 billion in fiscal 2020, which just ended, a figure only down 6% from the previous year. If management hits this FCF target, it would be an impressive achievement, given that sales are set to fall by 9% and earnings by 11%. Management's estimate speaks to its ability to cut costs (sales, general and administrative costs declined by 9.2% in the first three quarters of 2020) and maintain margin in a downturn. 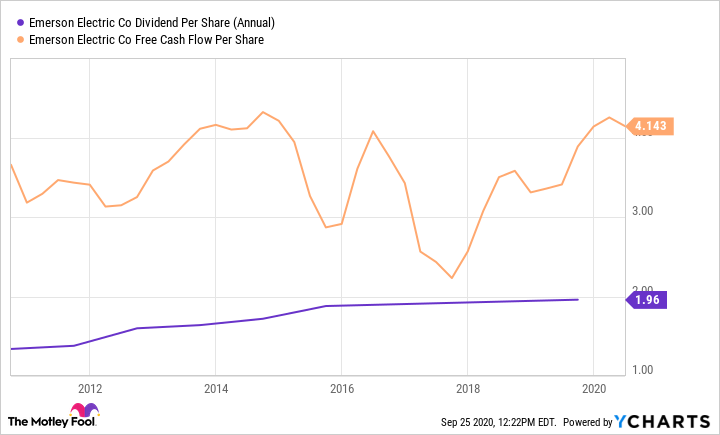 Management expects underlying sales to turn positive in the second half of its fiscal 2021. That's a viewpoint supported by the fact that its commercial and residential solutions segment's trailing-three-month orders turned positive in August. The segment deals with climate technologies and tools and home products. The automation solutions (process automation) segment's trailing-three-month orders were down 18% in August, but management expects a recovery as facilities reopen and factory utilization improves.

As the chart below demonstrates, this industrial stock's sales can be cyclical and are somewhat dependent on spending from heavy industries like oil and gas, chemical, power, and mining. The recession in the U.S. industrial economy in 2015 and 2016 did the company no favors. However, as noted above, Emerson's FCF was relatively resilient even in that extended period of weakness. 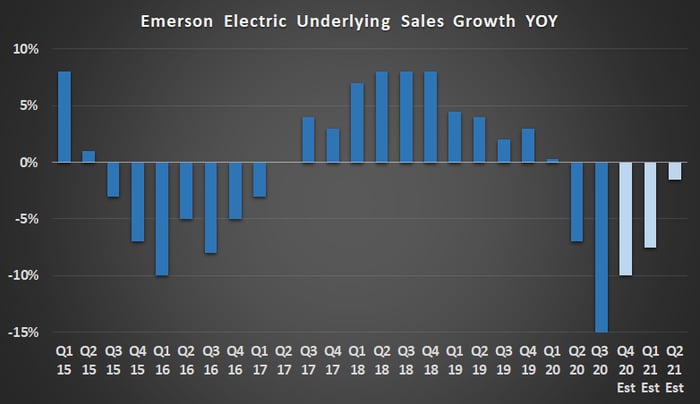 Emerson followers will recall that highly regarded CEO David Farr tried to buy Rockwell Automation in 2018; the failure of that bid hasn't diminished his deal-making proclivity. Two deals spring to mind as a demonstration of his determination to grow the company. First, Emerson bought the Intelligent Platforms business of General Electric in 2019, and in doing so, added cloud-connected controllers and smart-plant devices to Emerson's automation solutions.

Both acquisitions are examples of how Emerson is investing in smart technology in order to complement its existing strength in process automation. It's a long-term strategy to capitalize on growth in digital technologies and build on Emerson's strength.

It's no secret that Emerson has exposure to energy prices. If energy prices fall, it will inevitably cause a disruption in capital spending plans as companies hit the pause button on projects. That said, only 31% of its automation solutions revenue comes from upstream oil and gas, pipelines, and terminals.

The near-30% decline in the price of oil in 2020 is obviously a concern. However, the price of oil seems to have stabilized in line with the economy. Moreover, it's very difficult to predict just where energy prices will go, and the market may well have overly discounted the stock over fears of its energy exposure.

In this context, Emerson's FCF-based valuation makes the stock look cheap. With a market cap of $38.5 billion, the company trades at just 17 times its estimated 2020 FCF. That's not bad for a company in a trough year and it suggests that any upside to the energy market could lead to upside potential for the stock.

Emerson looks a good buy for dividend-seeking investors. The dividend looks easily sustainable and management is investing for growth. Throw in the kicker of some potential upside from higher oil prices and the picture get rosier. Furthermore, there's the argument that the market is overly discounting the stock because of fears about oil prices. All told, Emerson is a good value on a risk-reward basis and deserves a close look.