Can Costco maintain its momentum if the recession continues?

Costco Wholesale (COST -0.11%) attracted shoppers during the coronavirus pandemic because its warehouses remained open (albeit with shorter hours and special accommodations) and sold everyday merchandise like toilet paper, paper towels, and food at attractive prices.

The key to Costco's success is its annual membership fee that allows shoppers to buy merchandise at low prices. The trick is that it sells many items in bulk, so it can keep unit prices down. The total price is often higher than at other retailers, though. For instance, discount retailers and dollar stores provide lower absolute prices, so consumers pay less at the cash register for the item at these retailers.

Costco has had a lot of past success, but can it continue in the current tough economic climate? 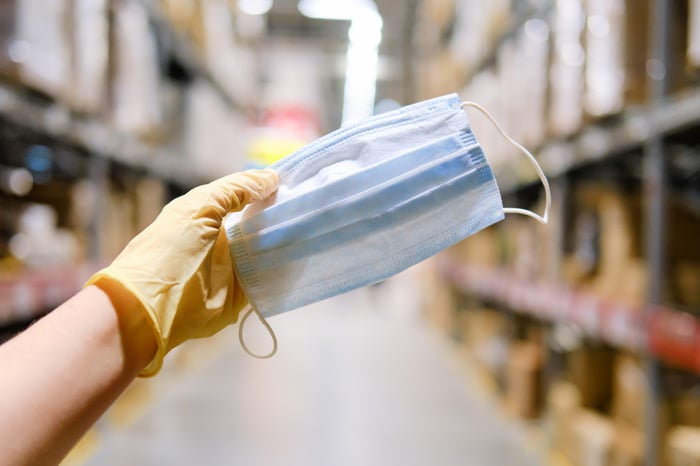 Costco offers a wide range of high-quality merchandise. It keeps prices low for customers by providing a limited number of brands across a broad spectrum of categories.

As you'd expect, bargain prices and a strong assortment have great appeal, and people have been signing up and retaining their memberships. Costco's fiscal 2020 (ended Aug. 30) renewal rate in the U.S. and Canada was 91%, and it was 88.4% worldwide, in line with the previous year. It has also been drawing in new paid members, ending the year with 58.1 million members, up from 53.9 million a year ago. Retaining memberships and adding new ones is a testament to Costco's appeal.

But how has it done with the onset of the recession? So far, Costco is doing great. In the fourth quarter, its same-store sales (comps) rose 11.4%. This comes as other retailers started reopening their doors to the public, so clearly there was more going on than people merely having access and engaging in pandemic-induced buying.

You can see this by looking at which areas did well. Management breaks out its merchandise into five broad categories (food and sundries, hardlines, fresh foods, softlines, and ancillary). Most were strong performers in the quarter, with sales in part of Costco's ancillary business, including travel, weaker.

Management feels so good about the future that it hasn't paused its new warehouse plans. It opened eight new clubs in the quarter, bringing the total to 13 for the year. There are now 795 warehouses.

Based on Costco's historical track record -- although it may experience some temporary weakness -- this optimism looks warranted, based on the company's long-term track record.

In fiscal 2007 and 2008, its comps rose 6% and 8%. They did dip 4% in 2009 before again becoming positive. However, foreign currency translations and lower gas prices combined to lower comps by more than 6 percentage points. In other words, its comps would have been positive if not for these two factors, which fluctuate and are outside of management's control.

In fact, Costco has not posted a negative annual comp since 2009. It is also important to remember that it is doing very well right now, showing it may get through this downturn unscathed.

I certainly wouldn't bet against Costco. After all, management has made Costco into an attractive place to shop, which is reflected in the renewal rates and new memberships. With a loyal customer base, this consistently strong performer deserves a place in your portfolio.