Addressing the limitations of the current leading COVID-19 vaccines could be the key to long-term success.

Ten coronavirus vaccine candidates are currently in late-stage testing, according to the World Health Organization. Four of them are being evaluated in U.S. phase 3 clinical trials, with a fifth set to join the group soon.

Merck (MRK -0.29%) isn't among the leaders right now. In fact, the big drugmaker's CEO Ken Frazier has publicly expressed doubts about the possibility that the rush to develop COVID-19 vaccines too quickly could backfire.

However, Merck began an early-stage clinical study evaluating an experimental coronavirus vaccine in late August. The company picked up this vaccine with its June acquisition of privately held drugmaker Themis. It's also collaborating with non-profit research organization IAVI on another investigational COVID-19 vaccine that should begin an early-stage clinical study later this month.

Merck is certainly late to the party with its COVID-19 vaccine program. But it just might be the bigger winner over the long run. 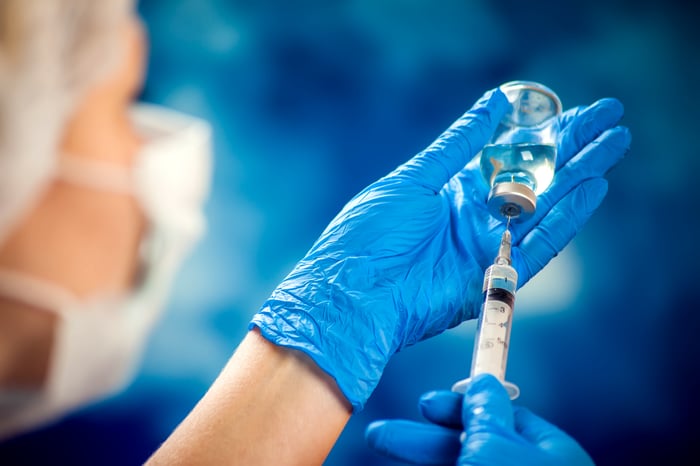 Drawbacks of the current vaccine leaders

Why could Merck potentially be a dark horse in the coronavirus vaccine race? It's important to first understand some of the drawbacks of the current vaccine leaders.

Pfizer and BioNTech are arguably farther along than any of the other players with their BNT162b2 vaccine candidate. Moderna, though, isn't too far behind with mRNA-1273. Both BNT162b2 and mRNA-1273 use a messenger RNA (mRNA) approach.

This mRNA technology is promising. However, it requires that vaccines be stored at below-freezing temperatures. That could present some challenges for transporting and storing BNT162b2 and mRNA-1273. These issues aren't showstoppers, but they're not ideal.

Another drawback for nearly all of the leaders in the COVID-19 vaccine race is that they require two doses to be administered. This adds to the costs of the vaccines. It also increases the risk that individuals won't receive a second dose and therefore won't be fully immunized.

Johnson & Johnson's JNJ-78436735 is an exception. The healthcare giant recently began a late-stage clinical study of the vaccine candidate, which requires only one dose. However, J&J also plans to conduct a separate phase 3 study with two doses of JNJ-7843673.

Merck to the rescue?

Neither of Merck's experimental COVID-19 vaccines will require freezing. That could set the vaccines apart from those of Pfizer/BioNTech and Moderna.

What about the number of doses? V590, the vaccine Merck teamed up with IAVI to develop, only requires one dose. Merck's testing of V591 includes the administration of one or two ascending doses.

But you can bet that the company really wants V591 to be successful with only one dose. Merck Research Labs president Roger Perlmutter stated in Merck's second-quarter conference call, "In dealing with an aggressive, globally dispersed disease like COVID-19, we believe that it is wise to lower the barrier to vaccination as much as possible, for example, by launching a vaccine that is effective with just a single administration."

It's possible that V590 could hold an even bigger edge over the current COVID-19 vaccine leaders. Perlmutter said that: "[O]ne additional advantage of V590 is that it may be active when administered orally via a swish-and-swallow protocol. And again, this will help lower the barrier to vaccination should it be effective."

Merck's clinical-trial protocol for its ongoing phase 1 study of V590 relies on intramuscular injection. However, Bloomberg recently reported that Operation Warp Speed's Moncef Slaoui hinted that an oral vaccine similar to Perlmutter's description of V590 could potentially be included in the federal program's plans.

Late could be great

It's not likely that Merck will be the biggest winner in terms of stock performance among companies developing coronavirus vaccines. Biotech stocks such as Novavax and Moderna are more likely to deliver eye-popping gains if their respective COVID-19 vaccines are successful.

There is a distinct possibility, though, that Merck's V590 and/or V591 vaccines could be more successful commercially than any of the current leaders. Sure, Merck is late to the party. But late could be great in this case.