Shares of Illumina (NASDAQ:ILMN) fell 13.5% in September, according to data provided by S&P Global Market Intelligence.

The decline has brought the gene sequencing company's share price back down to levels close to the beginning of the year, and around 22% below its all-time high of $400. 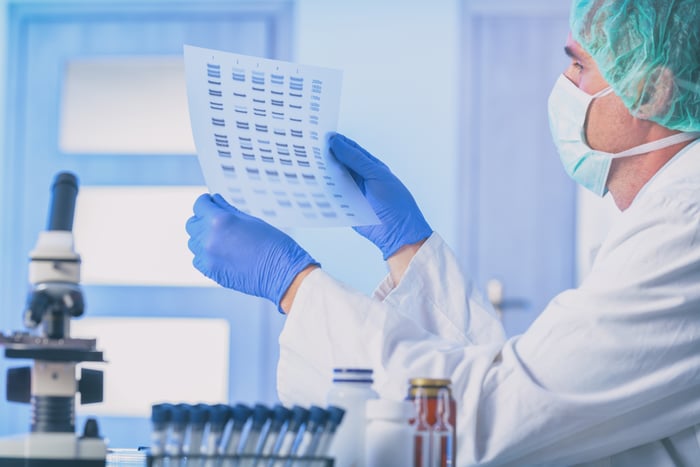 Illumina's stock price began its decline in mid-September as rumors swirled of a potential buyout of Grail Inc. As a recap, Grail is a healthcare company specializing in the early detection of cancer signals in the blood using its proprietary Galleri system. It was spun out of Illumina back in 2016 and went on to raise $2 billion in funding for research and development, though Illumina still holds around 14.5% of Grail's outstanding stock.

On Sep. 21, Illumina formally announced plans to acquire Grail for a cash and stock consideration of $8 billion. Illumina's CEO Francis deSouza is confident that this acquisition will allow Illumina to significantly grow its total addressable market by $60 billion (from the current $15 billion) by the year 2035. Grail's multi-cancer screening test is set to launch commercially in 2021 but has yet to conclusively prove that it can improve on current cancer screening techniques.

While this transaction may look good on paper, it does raise a few uncomfortable issues. As of June 28, Illumina had around $3.2 billion of cash and short-term investments sitting on its balance sheet, along with about $1.1 billion of debt. The company plans to settle the acquisition by paying $3.5 billion in cash and $4.5 billion in Illumina's stock, which implies that a significant amount of debt will be needed to finance this transaction.

By acquiring Grail, Illumina is also turning its customers into potential competitors. The company started out selling genome sequencing equipment for its customers to run tests on, but with Grail, it will now be competing head to head with them on developing successful liquid biopsy tests for cancer detection.