The company continues to struggle with plunging travel demand amid the ongoing pandemic.

The stock is now down around 17.5% from the level seen since the start of this year but is still up around 50% from the lows experienced in March. 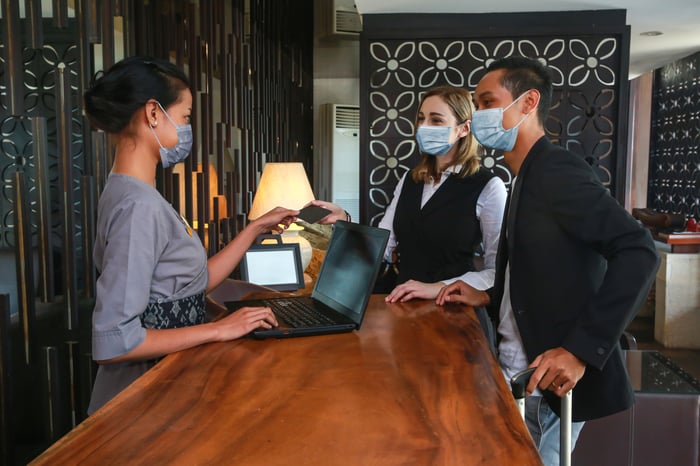 The pandemic has been extremely harsh on Booking Holding's business, as the company reported a sharp plunge in gross travel bookings of 91% in its previous financial quarter. Last month, Booking Holdings announced that it was closing at least five of its offices around the world, in countries such as the U.S., England, Canada, and Croatia. This announcement came as part of its intention to reduce its global workforce by up to 25% (or around 4,000 employees).

In mid-September, the World Health Organization announced the highest one-day increase of 308,000 cases of COVID-19 infections since the pandemic began. Three countries -- India, the U.S., and Brazil -- continue to log high daily infection rates without seeing a flattening of the infection curve. The U.K. is not faring much better at the moment either: it has recorded the highest death toll in Europe, at 42,300.

The global pandemic shows no signs of slowing down, with data from John Hopkins University pointing to infection rates rising in countries that had previously claimed to have slowed its spread. The global death toll has now surpassed 1 million, and many countries are still struggling to cope as they lack adequate resources and manpower.

With such an environment, Booking Holdings will continue to face a bleak outlook. Travel curbs look set to remain in place for the foreseeable future, at least until a successful vaccine is developed or the world manages to contain the rapid spread of the virus. Until that day arrives, Booking Holdings still represents a value trap for investors.