Please ensure Javascript is enabled for purposes of website accessibility
Log In Help Join The Motley Fool
Free Article Join Over 1 Million Premium Members And Get More In-Depth Stock Guidance and Research
By Jim Halley – Oct 6, 2020 at 6:22AM

Retirement planning is a lot easier when you have dividends coming in every month. Here are three stocks with high monthly yields you can count on.

Income-minded investors often face one problem with stocks that pay quarterly dividends -- a lack of consistency. It's hard to plan for expenses when you might make $3,000 in dividends one month and $500 the next month.

That's where monthly dividend payers can help your retirement, or pre-retirement planning. Knowing you can expect a certain amount to help with paying bills each month can bring some peace of mind. One other advantage of monthly dividends is that monthly compounding creates better returns in the long run than the quarterly version. 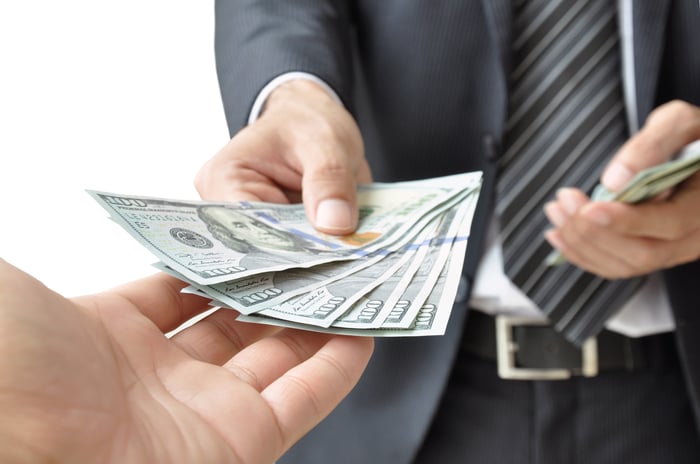 The share price for Pembina Pipeline (PBA 0.17%) is down more than 42% year to date, but don't let that worry you. It just means that stock in the Calgary, Alberta company is at a discount.

Pembina is a "midstream" oil and gas company because, rather than producing oil or gas, or selling it directly to consumers, it provides transportation and storage for oil and natural gas. The company sends out a monthly dividend of $0.16 a share, which works out to a hefty yield of 8.91% as of Friday's share prices.

Pembina has been paying out monthly dividends since 1998 and has raised its dividend for the past eight years. The price of crude oil and natural gas has fallen this year, and partly because of that, the company's net income was down a reported 62% through the first six months, year over year.

Considering that income drop, there's a concern over the safety of that hefty dividend, as the company has a high dividend payout ratio of 132%.

However, much of the company's revenue is relatively stable, coming from long-term fee-based contracts. Pembina said its accounts receivable are 97% current, which means that the companies it works with, most of which are investment-grade businesses, are doing fine. When you look at the company's EBITDA and adjusted cash flow, both are running slightly higher over the first six months of 2020 compared to the same period last year. On top of that, oil prices won't stay down forever, and when they do rise, the company's stock price will as well.

Main Street Capital (MAIN 0.44%) is a business development company (BDC) that provides capital to privately held U.S. companies, which then typically use those funds to support acquisitions, management buyouts, refinancing, and recapitalizations.

BDCs are like real estate investment trusts (REITs) in that they must pay out 90% or more of their taxable income as dividends. That means higher dividend yields than most equities, and that's definitely the case with Houston-based Main Street Capital, which pays a monthly dividend of $0.205 that works out to a current yield of 8%. It has also sent out special dividends at the end of every year since 2013.

The company's shares are down more than 28% year to date because it wasn't immune to the headwinds from the coronavirus pandemic. In the second quarter, the company's total investment income was $52 million, down $9.3 million year over year. Most of that drop was because of lost income from lower interest rates. However, the company tightened its belt in the quarter, spending nearly $2 million less, so its net income was down only $7.3 million compared to the same period in 2019.

Founded in 2007, Main Street Capital has increased its overall dividend for the past five consecutive years, and has never cut its dividend. Since 2007, the company has raised its dividend 86% while overseeing a net asset value (NAV) per share growth of 62%.

What I like best about the company is that its diversification keeps it from being overexposed to any one sector of the economy. Main Street Capital has investments in 177 small- to medium-sized companies, but not one of them makes up more than 3.7% of the company's investment income, which grew at a compound annual growth rate (CAGR) of 9.24% from 2015 to 2019. Unlike most BDCs, Main Street Capital is internally managed, which keeps costs down.

Gladstone Commercial runs against the tide

Gladstone Commercial (GOOD 1.13%) is a REIT that has faithfully given out a dividend each month, never lowering it, since 2003.

While the McLean, Va., company's stock is down more than 19% for the year, that has more to do with investors' worries about office rentals than the company's financials, which are on solid ground.

Gladstone specializes in net-lease industrial and office properties and had an occupancy rate of 95.5% as of the second quarter. Of its 122 properties over 28 states, the company had a 99% collection rate in July, August, and September, a slight improvement over the 98% it achieved in April, May, and June. 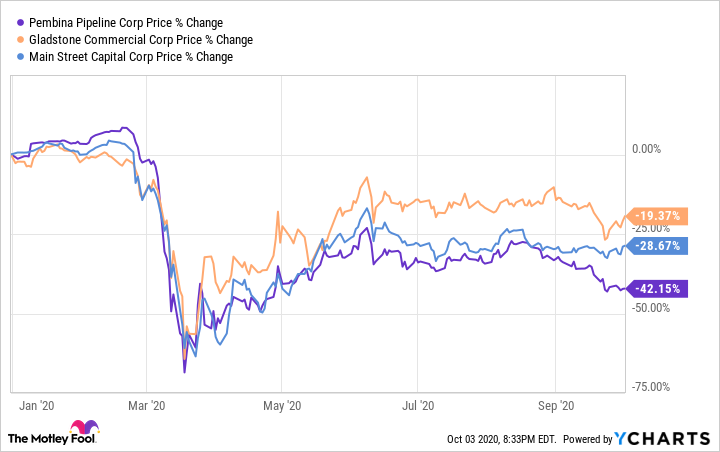 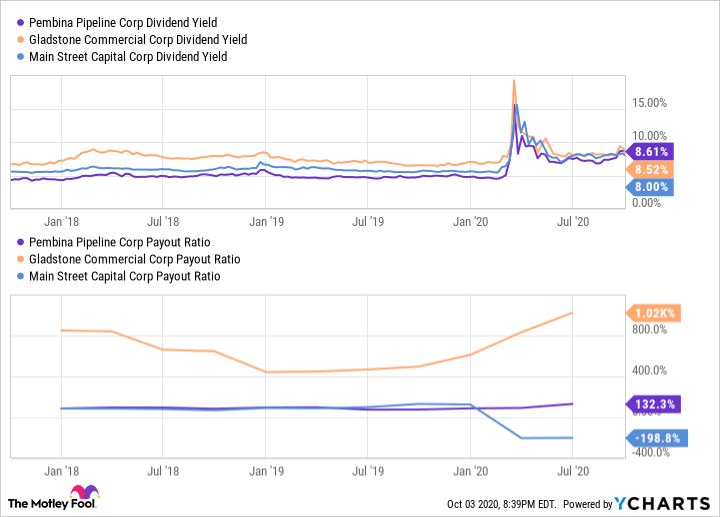 Any stock with a yield as high as these three presents a risk, but it's also a powerful draw for an income investor. Of the three, it's easy to see that Gladstone Commercial is in the best shape to maintain its dividend. The company hasn't really taken a hit from the coronavirus pandemic, and even during the recession of 2008, it continued to offer a dividend.

Pembina, despite its high payout ratio, offers a great opportunity for investors who are not risk-adverse. The stock is the most undervalued of the three, and its long-term leases will carry it through until gas and oil prices rise.

Main Street Financial also remains strong financially and will benefit as more companies look to expand once the pandemic ebbs.