It's the action du jour of tech stocks, but the e-commerce giant won't be playing.

After both Apple (AAPL 4.86%) and Tesla (TSLA 7.67%) split their stocks last month, investors rightly wondered whether another high-flying stock, Amazon.com (AMZN 4.46%), would also split its shares.

After all, with its shares at over $3,100 apiece, now would seem an opportune time to jump on the bandwagon. But I don't think Amazon will. Despite having split its shares three times in the past, the situation today is much different, and it appears Amazon is happy to remain a high-priced stock.

A long time ago

It's been more than 20 years since Amazon divvied its shares to make them more attractive to investors, and the e-commerce giant was still relatively new to the public markets back then.

Amazon's initial public offering was in May 1997. A year later, the company split its stock 2-for-1, when it was trading at only $85 per share and it had a market cap of less than $5 billion.

Just seven months later, it split again 3-for-1, after the shares had rocketed to $355 a piece. Eight months after that, in September 1999, it split for the third and last time, 2-for-1, when the stock was trading under $120 each. 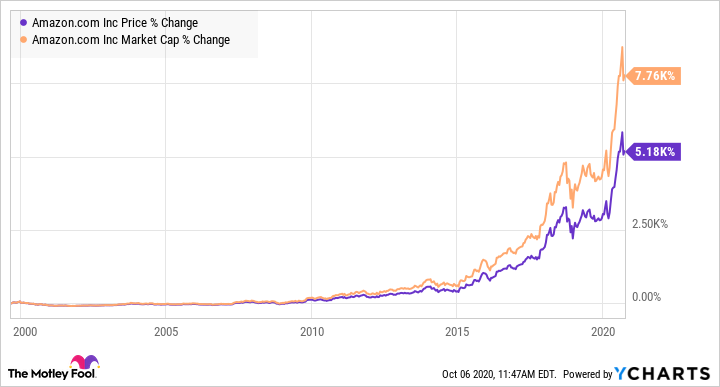 The big book of opportunity

An investor would be hard put to find a better performing stock, yet over the past two decades as Amazon's business has both grown and improved, and its stock continued to climb into the stratosphere, the e-commerce giant has chosen not to split its stock again.

Amazon was a much different company the last time it split its stock. Still primarily the "world's biggest bookseller," in 1999 Amazon had only recently expanded into selling music CDs, and it was just adding a few more categories to its selection, including, toys, electronics, and tools. By December of that year, the e-commerce company had shipped a total of 20 million items,  and it generated total revenue of just over $1.6 billion.

To put that into perspective, during its annual Prime Day shopping extravaganza event last year, Amazon sold over 175 million products. For the full year, Amazon had $280.5 billion in sales, meaning it took just the first two days of 2019 for its revenue to match the entire year's worth of sales in 1999.

Taking to the cloud

Of course, the Amazon of today is more than just books, toys, electronics, or tools, and you can find just about anything you want to buy on the website.

But it's also just more than about e-commerce. While shipping its products keeps the U.S. Postal Service operational, Amazon Web Services (AWS) generated $35 billion in sales, or about 12% of the total, yet represented 63% of Amazon's $14.5 billion in operating profit.

AWS has become the backbone for the online platforms of numerous other retailers and businesses, including the U.S. government. It controls a market-leading 31% share of cloud services, followed by Microsoft Azure at 20%, Alphabet's Google Cloud with 6%, and Alibaba at 5%.

What to do with Amazon stock?

Because Amazon encompasses far more than simply a consumer-facing business, even if that's what it's most recognized as, it doesn't need to make itself accessible to retail investors anymore.

In 1999, Amazon was trying to make its mark against Barnes & Noble, but today it's involved in almost every segment of the economy. Its products and services are literally almost too numerous to mention, which means it can be complacent about being available only to most retail investors as a fractional investment through services like Robinhood and WeBull.

A split doesn't really matter to an investor anyway, as that investor's stake in the company remains the same. It all depends upon whether you like your pizza cut into eight slices or 16 -- it doesn't change the size of your pie.

Still, after 20 years and thousands of percentage-point increases later, it's safe to say Amazon.com won't be splitting its stock anytime soon -- though that doesn't mean its stock isn't still a buy.