These companies are bright spots among the beleaguered industry.

COVID-19 caused various government entities to issue mandates that forced restaurants to close their doors to the public. With cases resurfacing in certain areas, combined with the economic fallout that will likely hurt consumer spending, the environment remains challenging for some industry participants.

All hope is not lost, however. There are companies that offer strong prospects even under difficult circumstances. These two companies will likely do well and reward shareholders with nice appreciation. 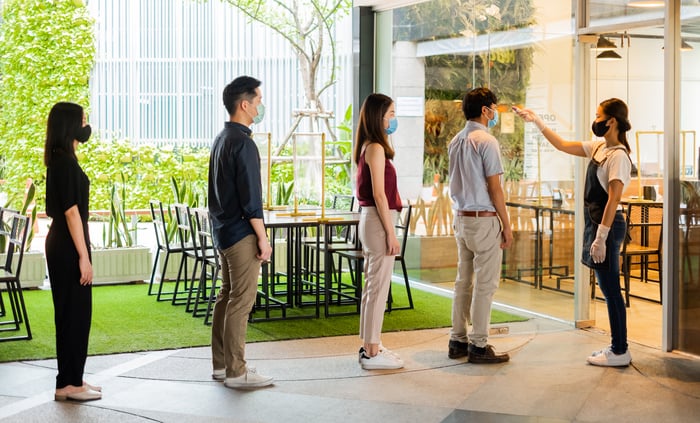 Dunkin' Brands Group (DNKN) franchises all of its namesake and Baskin-Robbins restaurants. This allows the company to collect initial fees and ongoing royalties based on the unit's sales, plus rental income on properties that it leases to the franchisees.

There's no getting around the fact that its second quarter was rough. Its Dunkin' branded restaurants in the U.S., which generates more than half of the company's revenue and the majority of its operating profit, saw same-store sales (comps) decline by 18.7%.

However, there are good reasons to think that the future holds brighter days. For starters, its comps improved each month, showing that people still wanted the products once they were able to move about more freely. It continues to work on the menu, introducing new drink and food items this fall. Dunkin' is also appealing to a different demographic after testing Beyond Meat's (BYND -0.86%) Beyond sausage sandwiches a year ago. This proved successful enough that it launched the product nationwide a couple of months later.

Additionally, the board of directors reinstated dividends after suspending the payout in the second quarter. This shows its confidence in the company's prospects.

Heading into this year, Dunkin' had strong results for the last several years, including comps increases. Its operating income went from $319.6 million in 2015 to $451.1 million last year.

Texas Roadhouse (TXRH 0.07%) also had a tough second quarter. There's no other way to describe a 32.8% comps decrease. However, management was able to quickly pivot the business to a pick-up and delivery model. As restrictions eased, it added outdoor dining and limited indoor seating. Comps improved monthly during the quarter, from negative 46.1% in April to down 14.1% in June. Its ability to adjust will serve the company well if governors reimpose restrictions.

Its business is to offer high-quality food at a good price. This is a simple, yet effective approach. You only have to look at the results to see its success. Before the pandemic, it had several years of comps increases and steady earnings per share (EPS) gains. Over a five-year period, its diluted EPS went from 2015's $1.37 to $2.46 in 2019.

While the stock has more than doubled from March's $30, it appears that the shares have more upside. With its winning formula, it has 620 restaurants, including in nine foreign countries. Opening about 30 annually, it hasn't saturated the marketplace.