As this biotech's coronavirus vaccine candidate speeds toward approval, it's become clear that its revolutionary development method could transform vaccines forever.

The 2020 news cycle has been dominated by the coronavirus -- and understandably so. There have been over 36 million confirmed cases and 1 million deaths related to the virus worldwide. Economic and health effects are tracked day by day, and every update on vaccine progress is met with a combination of hope and impatience. But if we take a step back, we might just realize that there is a silver lining to the massive disruption experienced during this most extraordinary year. Medical research has accelerated in a way that could radically change how we treat diseases in the future. And that could pay off big for healthcare investors as years of advances are pushed forward in an attempt to end the pandemic.

Moderna Therapeutics (MRNA -3.52%) has been one of the biggest beneficiaries of this acceleration. The company's as yet unproven technique of using messenger ribonucleic acid (mRNA) to prevent infectious disease is behind one of the leading candidates for a COVID-19 vaccine. 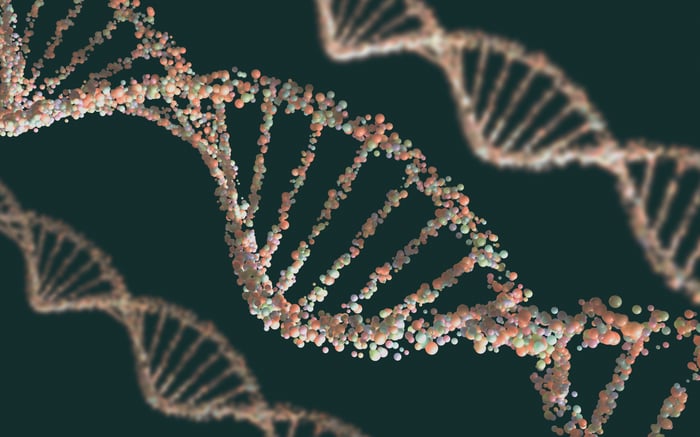 The software of life

Most people are familiar with deoxyribonucleic acid (DNA), as it is often synonymously used with "genes" or "genetic material." Not as many people are familiar with the complementary RNA, a similar substance that controls cellular function and gene expression. While DNA is a set of instructions, RNA translates these instructions for cells so they know what to do with it. Moderna president Stephen Hoge once called mRNA "the software of life." Even if we only understand a little about RNA and its role in the body, it's hard to argue with that seemingly hyperbolic statement.

The simple metaphor is that cells are little machines following the orders of RNA as it reads the DNA instructions. The distinction may seem unimportant -- that is -- unless your goal is to give the cells a new set of instructions to prevent or fight disease. This is exactly what Moderna has spent the past decade developing. In the company's recent investor presentation, management estimated that COVID-19 has accelerated the development of mRNA therapies by three to four years.

The company currently has 23 treatment candidates in the pipeline from pre-clinical to phase 3 trials, including seven vaccines. Management also recently announced it would be entering the market for influenza vaccines. Traditionally, flu vaccines are only 40% to 60% effective, yet the market is estimated at $4.5 billion as of 2019.

Management recently announced a partnership with Vertex Pharmaceuticals (VRTX -1.17%) to develop a gene-editing approach for fighting cystic fibrosis. If these early efforts prove mRNA to be more effective than the standard methods of treatment, the payoff for investors could be huge.

According to management, there are several advantages of using mRNA to guide protein production inside cells, compared to traditional drug development. In theory, mRNA could replace biologics -- the fastest-growing segment of the drug industry -- and a huge portion of the biotech industry, which as a whole is expected to skyrocket from a valuation of $255 billion in 2019 to $729 billion in 2025. Aside from the enormous market potential, the approach could also allow rare metabolic disorders to be treated, as mRNA provides cells with an updated set of instructions to produce needed proteins.

In addition to treatment benefits, there are also potential advantages in the development and manufacturing process. By using genetic material, vaccine development is able to skip the time-consuming steps of growing a disease, waiting for it to replicate, purifying, then inactivating the disease in order to create vaccine doses. This could cut the traditional one to two years of manufacturing time down to a few months.

Despite these obvious benefits, much is still unknown about the effects of an mRNA vaccine in humans. Although Moderna has not had a drug approved by the U.S. Food and Drug Administration (FDA), and no mRNA vaccine has ever been approved, there is some precedent for leveraging RNA to fight disease. Several drugs have been successfully developed using a similar technology which silences the expression of certain genes using RNA.

Is Moderna an investment or a lottery ticket?

Although investing in such an early stage biotech company can feel a little like buying a lottery ticket -- only a few are big winners -- Moderna has a lot of the characteristics that produce life-changing returns for investors. Reaping the rewards will undoubtedly require being disciplined enough to hold the shares through the rollercoaster of inevitable news -- from drug approvals and new partnerships to delayed trials and lack of efficacy -- without any guarantees.

Right now, Moderna is near the front of the pack with one of the leading vaccine candidates for a once-a-century pandemic. Unlike many others developing a COVID-19 vaccine, the benefit for the compnay is not product-specific from the pandemic, since it is accelerating the potential approval of its transformational approach using mRNA. This seems like a great position to be in, and the stock, up 262% year to date through September, reflects that.

Although Moderna gets a lot of attention for this novel approach, the company has competitors also using mRNA to fight diseases. CureVac N.V. (CVAC -1.30%), BioNTech (BNTX -1.78%), and Translate Bio (TBIO) have all gone public in the past year and have partnered with large pharmaceutical companies to develop mRNA-based medicines. For investors excited about the new technology but nervous about the risk of investing in a single company, a basket approach -- investing a smaller amount in each company -- may be the best approach.