Time will reward investors' discipline if they resist the temptation to take profits from these holdings.

In most investment portfolios, a small number of winning stocks usually account for an outsize share of the overall returns. To get the most out of those winners, investors must resist the urge to sell too early when a stock is up a lot, and instead, let their winners run.

It can be tempting to take profits while they're certain, and equally tempting to double down on your decliners during times of market volatility in the hopes that they'll rebound. History has shown, however, that those tactics regularly result in subpar returns and high opportunity costs. Today, let's look at three momentum stocks that have produced big gains for shareholders over the past year and consider why investors would do well to continue to hold on to their shares even as they celebrate those paper gains. 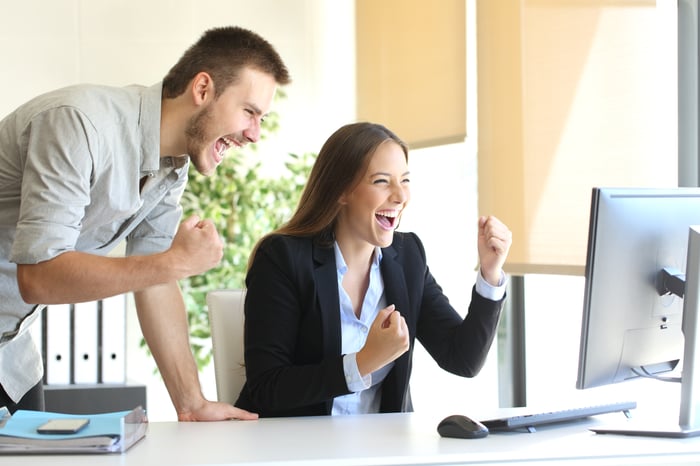 With a stable of well-known brands that includes Tinder, Match.com, OkCupid, Plenty of Fish, and Hinge, Match Group's (MTCH -5.35%) market share in the world of online dating is unrivaled. In fact, the company's various services are responsible for kick-starting 6 out of every 10 relationships that begin online in the U.S. Its most notable successes are Tinder and Hinge -- the former is the most-downloaded and highest-grossing dating app worldwide, and membership for the latter has increased by more than tenfold since 2017 to over 4 million.

Match now has 10.1 million paid subscribers across its platform, generating $2.2 billion in annual revenue and $258 million in free cash flow free cash flow (FCF). In the second quarter, its revenue was up 12% to $555.5 million, while its earnings per share increased 13% to $0.51.

Its subscriber growth rate took a devastating plunge during the height of the pandemic in March, but it's now back to normal, with a year-over-year average of more than 15% as of July 31. For all the growth Match provides, its stock is a surprisingly good value, with a price-to-sales (P/S)  ratio of just 6.5. Over the past year, Match stock is up by more than 40%.

Chegg's (CHGG -1.40%) role in higher education has become more vital than ever as universities across the world move to online teaching in the face of the COVID-19 pandemic. The company provides writing, tutoring, assignment solutions to university students, as well as selling and lending textbooks and e-books. It costs just $15 to $20 per month for a Chegg subscription -- a relative bargain when weighed against the time students can save by using the service to help them grasp difficult concepts.

During the second quarter, Chegg's revenue grew by an astonishing 63% year over year to $153 million. Net income reached $10.6 million, compared with the net loss of $2 million it booked in Q2 2019. The company added nearly 1.5 million subscribers during the year, bringing its total membership count to 3.7 million.

Given the massive adoption of online education that has taken place in 2020, Chegg's growth streak is likely far from over. For the full year, the company expects to generate $615 million in revenue, up from $411 million last year. Since October 2019, shares of Chegg are up by more than 90%.

On Aug. 5, Teladoc Health (TDOC -3.84%) and Livongo Health (LVGO) announced an $18.5 billion merger that will create the biggest telemedicine company in the U.S. Thus far, Teladoc has been one of the most successful virtual healthcare platforms in the nation, with revenue up by an average of 67% per year since 2015. The company expects to generate nearly $1 billion in revenue in 2020.

Teladoc's growth rate naturally accelerated with the onset of the COVID-19 pandemic, which led to a surge in demand for virtual doctor visits. During the second quarter, the company's paid membership grew by 92% year over year to 51.5 million, while the total visits it facilitated more than tripled to 2.8 million. Prior to the pandemic, only 11% of Americans said they were comfortable using telemedicine services. By the end of Q2, that number had soared to 76%.

That's not all: Teladoc also boasts an impressive 90% client retention rate and generates up to $472 in savings per patient as compared to in-person visits. Similarly, 94% of patients who try Livongo's namesake app sign up for a paid membership, which can help them save nearly $2,000 per year in medical expenses; app users report reduced hypertension, better weight management, and improved quality of life.

More than $250 billion in annual U.S. healthcare spending could shift to virtual service providers over the next few years, creating a significant opportunity for Teladoc and Livongo. Further, the two should be able to generate substantial revenue synergies post-merger by encouraging their clients to sign up for -- and benefit from -- both sets of services. And they can accelerate their revenue growth by expanding their businesses internationally.

The sky is the limit for Teladoc and Livongo. Management projects that the combined entities will generate up to $3.5 billion in revenue and $591 million in operating income, excluding non-cash expenses (EBITDA) by 2023. So if you're a healthcare investor who's sitting on a healthy paper profit from Teladoc's 166% run-up over the past year, sit tight. There's more to come.

Zhiyuan Sun has no position in any of the stocks mentioned. The Motley Fool owns shares of and recommends Livongo Health Inc, Match Group, Inc., and Teladoc Health. The Motley Fool has a disclosure policy.