Please ensure Javascript is enabled for purposes of website accessibility
Log In Help Join The Motley Fool
Free Article Join Over 1 Million Premium Members And Get More In-Depth Stock Guidance and Research
By Demitri Kalogeropoulos – Oct 11, 2020 at 10:13AM

The chain is expecting to see bumpy sales in the international business thanks to pressures from the COVID-19 pandemic.

Domino's (DPZ 5.05%) sales growth is still accelerating. The pizza delivery leader said this week that revenue gains sped up in both its core U.S. market and in its international business.

The faster growth supported surging profits and cash flow but suggested the chain is losing some ground to rivals including Papa John's (PZZA 3.00%), even as the selling environment is getting tougher for store launches outside of the U.S. 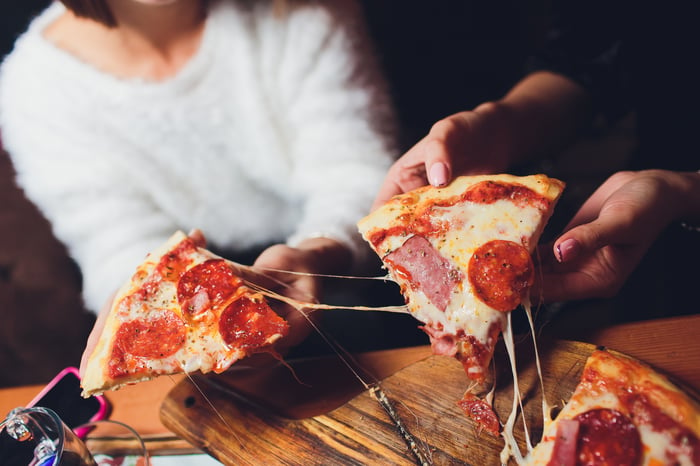 There was plenty of good news on the sales front, with revenue gains accelerating to 17.5% in the U.S. segment compared to 16.1% in the prior quarter. Domino's had been growing at around 3% before the pandemic put a new premium on home delivery .

While the pizza leader is taking advantage of that positive selling environment, rivals are also closing in. Papa John's said in early August that sales rose 18% in the fiscal third quarter that ended in late September .

Still, Domino's executives are happy with the performance, especially since they didn't have to rely on aggressive promotions to boost sales. "Our strong third quarter results once again demonstrated our focus on value, service, quality and innovation to meet customer needs," CEO Rich Allison said in a press release.

The chain also notched faster gains in the international business, which had grown by only 1% in the prior quarter. The 6% boost in the third quarter left Domino's in less danger of breaking its streak of sales wins that currently sits at 107 consecutive quarters of international growth. On the downside, management said several markets are seeing sales pressures that might result in a slower pace of new store launches into 2021 and beyond.

Domino's achieved higher earnings that were amplified by aggressive stock repurchase spending. Operating income rose to $162 million from $143 million a year ago. And, while that boost translated into slightly lower profitability, the chain's net income rate held steady at 10.2% verses 10.5% a year ago .

Domino's free cash flow was solid at over $319 million through the first three quarters of the year. These resources allowed management to spend freely on stock buybacks that reduced the outstanding share count. As a result, earnings jumped 21.5% on a per-share basis even though net income only rose 14.8%. Debt remained substantial at over $4 billion.

Domino's faces more competition from companies across the fast-food and casual dining industry niches. These challenges could threaten its streak of sales wins that have allowed it to add 15 percentage points to its pizza delivery market share in the last decade.

However, the chain has more than just a dominant industry position to rely on in this battle. Its delivery-focused stores are extremely efficient, which gives them an advantage at a time when many restaurants could be closing locations. Domino's closed just three of its U.S. stores this past quarter while adding a net 44 locations to its footprint at home.

These stores are helping pad sales and profit growth. But more importantly, they're reducing delivery times and adding new carryout hubs even in well covered neighborhoods. Domino's is hoping that the resulting boost in customer satisfaction will help it extend its market share wins into fiscal 2020 and through the current restaurant recession.