The company seeks to raise up to $200 million in the next few months, according to one report.

Virgin Orbit, a part of Sir Richard Branson's Virgin Group, is looking to raise between $150 million and $200 million in the near future, according to The Wall Street Journal. This would give the private company a valuation as high as $1 billion.

The satellite launch company is on a different mission than publicly traded Virgin Galactic (SPCE 3.15%), which is also part of Branson's Virgin Group conglomerate. Virgin Orbit plans to provide clients, including NASA, with a flying launch platform for small satellites. Virgin Galactic is looking to make space tourism available to customers. 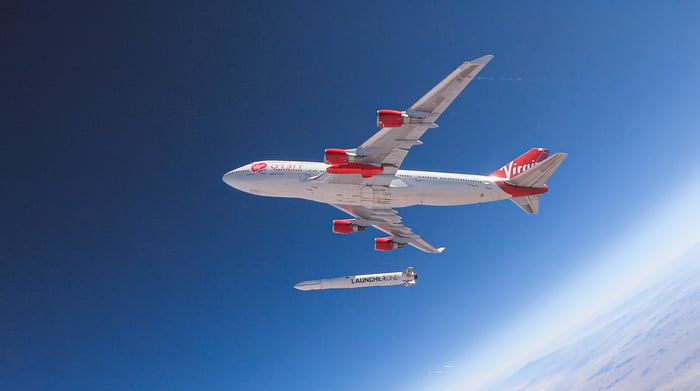 The proposed funding round for Virgin Orbit will be used for satellite launches and other capital needs, according to The Wall Street Journal report. The report added that Branson's company has already spent more than $400 million building its air-launching platform.

The company's initial demonstration flight was in May 2020 and had to be cut short. The rocket was successfully dropped from the aircraft and for the next nine seconds, the flight went "perfectly," the company said, through the rocket's ignition sequence and initial portion of guided flight. A malfunction then caused the booster-stage engine to extinguish, and the remainder of the flight was safely aborted.

With the initial attempt unsuccessful, the company still has not yet put a payload into orbit. The company stated in August that it had almost completed its full investigation of the initial demonstration's failures. It said it is making progress toward its next Launch Demo 2 mission, though it hasn't set a date.