Wall Street has watched with frustration as the Dow lags behind.

It's easy to miss when the stock market is moving higher across the board, but the Dow Jones Industrials have lagged behind other benchmarks just about all year long. Even as the S&P 500 and Nasdaq roared ahead to new all-time highs, the Dow remains stubbornly below its high-water mark. The factors holding the Dow back say a lot about how investors are thinking right now and what's likely to happen in the future.

Just how badly is the Dow doing?

From day to day, it's easy to miss the impact of the Dow's underperformance. For instance, this morning, the Dow's up 1%. Most investors aren't apt to complain about that, even when the S&P rises 1.5% and the Nasdaq gains more than 2%.

Those disparities have been happening on more days than you'd think, though. The result is massive underperformance. As you can see below, the Dow is just barely up on the year. It's lagging the S&P by 8 percentage points, and it's behind the Nasdaq by a whopping 30 percentage points. 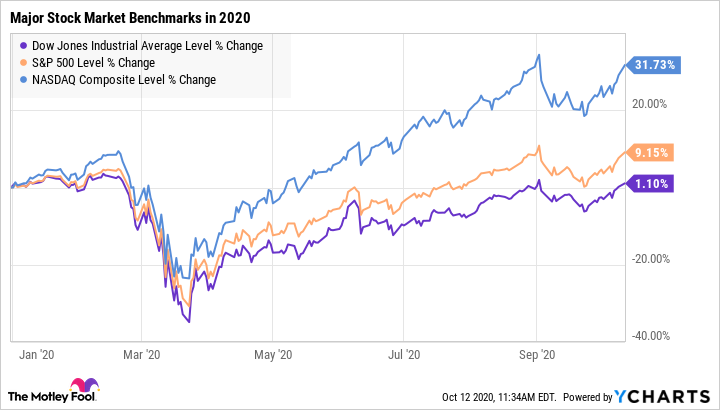 The more disturbing thing about that chart is that the Dow performed so poorly during March. Ordinarily, when the blue chip stocks in the Dow lag behind the broader market, it's because investors are less defensively minded. That's especially true during bull markets, when the growth-oriented Nasdaq can see truly extraordinary outperformance.

What's unusual about the Dow's bad showing in March is that it showed that the ordinarily reliable defensive stocks in the Dow didn't do their jobs in protecting shareholders from the brunt of the bear market. The Dow's maximum drawdown in 2020 was therefore more extreme than that of the Nasdaq and S&P 500.

Part of the explanation comes from the nature of the bear market. The coronavirus pandemic crushed certain industries. Aerospace remains down for the count, with Boeing (BA 1.59%) down 48% for the year. The financial sector also found itself in the crosshairs, due to interest rate fluctuations and concerns about COVID-related insurance claims. In the Dow, both Goldman Sachs (GS 2.34%) and JPMorgan Chase (JPM 0.60%) remain solidly down for the year. The energy industry also hasn't recovered, leaving Chevron (CVX -0.10%) down 35% year to date.

Meanwhile, the Dow doesn't really have the hypergrowth companies that have helped push the Nasdaq higher. Apple (AAPL 0.90%) and Microsoft (MSFT 2.10%) have been notable gainers, but Apple's 4-for-1 stock split this summer has dramatically reduced its influence in the price-weighted average. High stock prices for Boeing and Goldman, meanwhile, have accentuated their downward pull.

It's likely that at some point, growth stocks will go out of fashion, and the more value-oriented stocks you tend to find among the Dow Jones Industrials will perform relatively better. However, value has underperformed growth for several years now, and there's no rule saying that a reversal of fortune has to happen anytime soon. That could leave the Dow lagging behind well into the future.

Apple Falls on China Fears, but This Nasdaq Stock Is Soaring Monday
395%