Yet the stock dipped on the news. You should scoop some up.

High-growth semi-cap equipment maker ASML Holdings (ASML -1.99%) just had its third-quarter earnings report  today, October 14. The company is the sole provider of extreme ultraviolet lithography (EUV), which is a key technology to making smaller and more powerful semiconductor chips for the next decade. EUV anchors a machine portfolio that also includes deep ultraviolet lithography, and metrology and inspection -- technologies that should eventually grow over the next decade as more and more advanced semiconductors are made to fuel AI, 5G, and the Internet of Things.

ASML, one of the first companies to report this earnings season, just delivered a handy beat over analyst expectations, all while raising its dividend and announcing the restart of its share buyback. However, the stock slipped after the announcement. Here's why you should consider picking up some shares on any pullbacks. 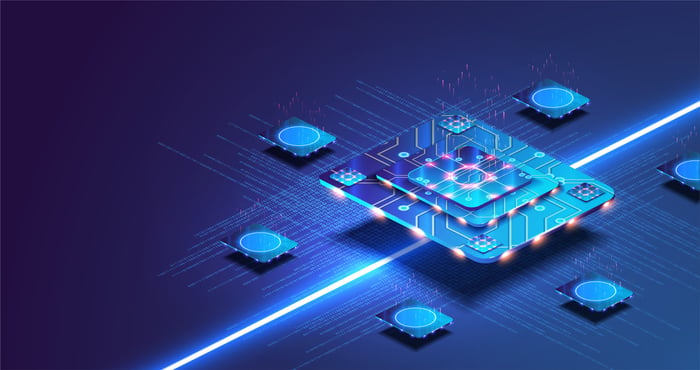 Guidance was just OK, but due to short-term fluctuations...

For the third quarter, ASML grew revenue 32.5% year over year, with net income up 69.4% as margins expanded. Both figures handily beat analyst expectations.

So why did the stock fall? Investors probably shouldn't read too much into this. Most technology stocks fell Wednesday, as the prospects for a stimulus deal before the election appeared to fade. Nevertheless, there were what some might consider "flies in the ointment" regarding ASML's outlook.

Next quarter, management forecasts revenue between 3.6 billion and 3.8 billion Euros -- sequentially lower than the 4.0 billion Euros made in the third quarter. Management also said that due to some timing uncertainty with certain customers, some EUV sales may slip from the fourth quarter into next year. Finally, the company gave a general outlook for 2021, forecasting "only" low double-digits growth, which might seem underwhelming in light of this quarter's sterling results.

Regarding next quarter, investors should know that the current quarter benefited from extra revenue recognition for four EUV machines that were actually shipped in the second quarter but weren't recorded as revenue until the third quarter. Given that EUV machines can go for $150 million per machine, that's a huge difference. Taking those away from the current quarter, revenue would grow sequentially in Q4. Additionally, ASML is proving out its margin expansion story, with gross margins projected to rise to 50% from just 47.5% in the recent quarter.

It may seem counterintuitive, but ASML's EUV machines are actually a lower-margin product right now despite their being a monopoly. Management noted EUV machine gross margins were around 40%, and EUV service revenue should just hit breakeven in the current quarter. That's because EUV production is just ramping up, and margins should expand on higher volumes in the future. In addition, EUV has to be somewhat cost-competitive over multiple deep ultraviolet lithography (DUV) passes, which is a less efficient and more difficult (though less expensive) alternative to EUV scaling.

Still, as ASML moves from shipping about 35 EUV machines this year to 45 to 50 next year, those margins should continue to go up. So while management gave guidance for low-teens growth in 2021, operating margins and earnings per share should grow much faster than that.

Additionally, I think management is being cautious with guidance due to all of the uncertainty around the U.S.-China trade war and recent government restrictions on sales to certain Chinese foundries.

Not only that, but as EUV is becoming more mature, management now says it will be requiring down payments for EUV machines from customers, as opposed to the past, when management gave customers extended payment terms as they were proving out the technology. That should greatly help free cash flow, which will fuel more share buybacks and dividends.

While ASML's dividend only yields about 0.75%, management confidently hiked the payout. ASML pays a bi-annual dividend, with the next payment coming in November. That dividend will total 1.20 Euros per share, 14% above the 1.05 Euro dividend paid at the same time last year. Better yet, the company is resuming share buybacks as part of its three-year, 6 billion-Euro program.

No change to the outlook

ASML remains a solid growth stock with a wide moat and a bright future. While its share price may waver a bit around events like earnings, it's looking like a solid buy-and-hold for the long term. Despite Wednesday's pullback, ASML's stock is still up 38% on the year clouded by a global pandemic, so shareholders shouldn't have too much to complain about here.