Today, Starbucks is betting on the socially distanced coffee experience.

Investors who bought Starbucks (SBUX 0.69%) shares slightly over a decade ago and held on to them are smiling right now. In 2009, the stock traded as low as about $5. An investor who made a big bet at that time, investing $60,000 in 12,000 shares, today would be a Starbucks millionaire.

The coffee shop giant represents a winning bet over time -- even if you bought and held for only a few years. Revenue and share price both have climbed. This year, however, Starbucks reached an inflection point. The coronavirus outbreak temporarily closed many of the coffee giant's shops and put an end to the idea of grabbing a coffee to socialize. Now, the question is whether Starbucks can regain its glow -- and whether you can make a million if you invest in its shares today. 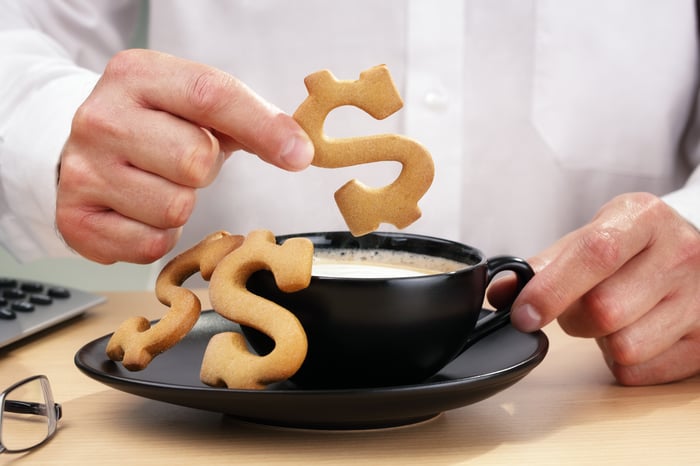 A shift to takeout

Let's first have a look at what happened this year. Starbucks closed about half of its stores in its two biggest markets -- the U.S. and China -- as the COVID-19 crisis peaked in each country. Almost all stores in these countries as well as others are now open. Though Starbucks quickly shifted to takeout and drive-thru service during the crisis, sales still suffered. In the fiscal 2020 third quarter, net revenue fell 38%. The drop reflects the store closures, shorter hours, and less traffic as consumers stayed at home.

But here's where investors should be hopeful: Starbucks said it expects the coronavirus impact to "moderate meaningfully" in the fourth quarter. The company plans to report those results on Oct. 29. And here's the good news: Starbucks is proving it can quickly adapt to the current market. The company's emphasis on takeout in the early stages of the crisis was just the first step.

Starbucks' measures aren't just a quick fix though. "We are rapidly shifting our business in response to shifting customer behavior in the near-term and for the long-term," CFO Patrick Grismer said during a recent conference.

Here are a few details about Starbucks plan. Social distancing may continue for quite a while, and Starbucks is  ready. The company's goal is to make the drive-thru experience quick and easy for customers. That means reducing wait time. For that, Starbucks is deploying handheld point-of-sale (POS) devices. With orders taken in the line on the POS, order preparation can begin earlier. Starbucks also is offering curbside pickup where parking is available and is speeding up the development of Starbucks pick-up stores.

How to earn stars

It also is easier to become a loyal Starbucks customer today than it was in the past. Before, you had to purchase a prepaid card to be eligible for "stars," or rewards. Now, Starbucks offers another option. Customers may pay with cash or their credit cards and still earn rewards. For Starbucks, gaining loyalty is key since program members are an important growth driver. For example, 90-day active members of the program in late August had already rebounded to 18.7 million from 16.3 million at the end of July. That's approaching the pre-crisis level of 19.4 million.

And finally, growth in China is another area that makes Starbucks' future prospects bright. The company is opening about 500 new stores there this fiscal year. Starbucks is the market leader in China, accounting for about 81% of coffee shop sales in the country, according to Statista. And China's coffee market is growing at a 10% compound annual growth rate, Mordor Intelligence research shows. One challenge Starbucks faces in this market is that 80% of its transactions prior to the recent health crisis were for in-store consumption. Grismer said that number is now lower and Chinese customers are adapting to the new focus on digital.

It's too early to say which of Starbucks' measures represent a permanent transition and which may just be needed for a short period of time. Considering the unprecedented nature of the current health crisis, it's also too early to say whether Starbucks' efforts can fully compensate for revenue lost in recent quarters. But it's clear that this adaptability and the close monitoring of the consumer's changing behavior is favorable. It should help the company navigate this tumultuous time and take the right track once the market has stabilized. And that should eventually translate into revenue growth and share price gains.

So, with the future looking positive for Starbucks, can investors expect to make millions? If you invested $10,000 at the current share price of about $89, you could buy 112 shares. From this point, Starbucks would have to reach $8,931 a share to make you a millionaire. This sort of performance seems unlikely. That doesn't mean you should turn your back on Starbucks, however. The shares probably won't reach the level to make you a millionaire, but they still have plenty of potential to move higher over time. Starbucks has a solid track record, with revenue rising for the past decade. And over the past decade, the stock gradually gained, too. 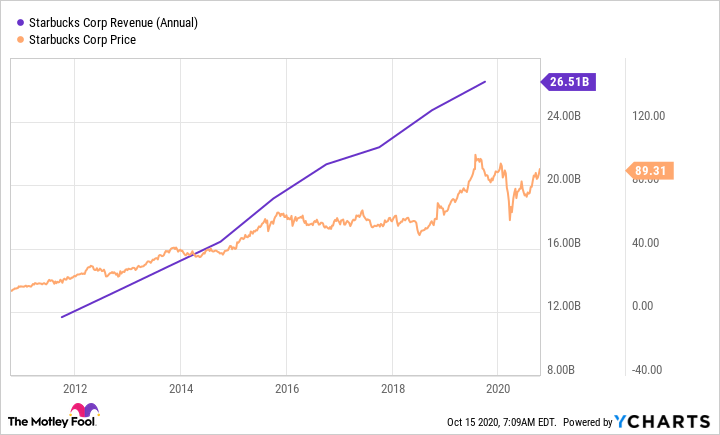 It's OK if Starbucks shares don't equal a million-dollar brew in your portfolio. However, they still can play a valuable role, contributing to overall gains. In general, you're more likely to become a millionaire through a diversified portfolio than through an investment in a single company.