Please ensure Javascript is enabled for purposes of website accessibility
Log In Help Join The Motley Fool
Free Article Join Over 1 Million Premium Members And Get More In-Depth Stock Guidance and Research
By Rick Munarriz – Oct 15, 2020 at 11:40AM

Raising $1 billion in stock and debt offerings didn't go over well this week for Royal Caribbean, but the next port of call could be worth checking out.

The waters are rough for the cruising industry, but Royal Caribbean (RCL 0.57%) is having a pretty good week if we look beyond the near-term stock price fluctuations. The country's second-largest cruise line operator increased its liquidity by roughly $1 billion on Tuesday, after completing stock and debt offerings.

Pricing 8.333 million shares at $60 will be dilutive. The same can be said about the $500 million in senior convertible notes. The stock did take a 13% hit on Tuesday as a result of the financing moves.

But now that the market has had some time to reflect on Royal Caribbean's coffer-padding measures, it's starting to come around. A pair of analysts (not any of the offering's book-running managers) are now offering up encouraging notes on Royal Caribbean stock. Calmer seas could be on the horizon. 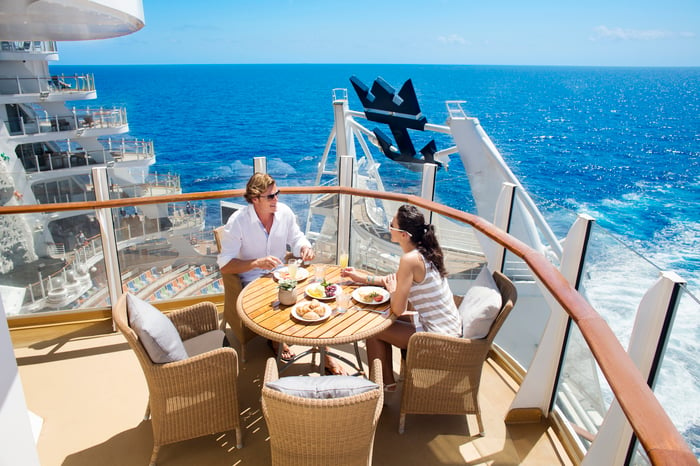 Royal Caribbean isn't any different from Norwegian Cruise Line Holdings (NCLH 0.67%) and industry leader Carnival (CCL) (CUK 0.23%) these days in terms of generating revenue. They're all in the same boat, if you will, with U.S.-based sailings pushed out until at least December. It wouldn't be a surprise if we're talking about the industry's restart taking place at some point in early 2021.

But Royal Caribbean is different even as all three players appear to be standing still. It's fared slightly better than its peers in getting passengers on canceled sailings to apply those funds to future voyages, even though we're now seeing roughly half of the displaced customers asking for cash refunds. The pace should improve for all three players once consumers are confident that sailings will return soon. Any steps out of this recession would also only help at this point.

Royal Caribbean stock has held up better than Norwegian Cruise Line and Carnival shares in 2020. Royal Caribbean also noted earlier this week that bookings for 2021 have been improving over the past two months.

The $1 billion capital infusion will come in handy. With Royal Caribbean's monthly cash burn clocking in between $250 million and $290 million, this gives it at least three more months of liquidity -- and as many as four more -- if cruises don't start again.

William Blair analyst Sharon Zackfia is one of the two Wall Street pros to put out upbeat notes on Royal Caribbean since Tuesday's financing moves. She has a neutral rating on the stock given the limited visibility on the industry's recovery pace, but she still points out that Royal Caribbean now has eight months of liquidity in a climate with no new sales.

Stuart Gordon at Berenberg is the other analyst to chime in since the stock and debt offerings. He's also neutral on the shares, but he did raise his price target from $45 to $60 -- which happened to be Tuesday's secondary offering price tag. He also is concerned about the uncertainties in assessing where we are on the comeback trail for the industry.

Then again, having two analysts with hold ratings put out somewhat encouraging notes is a good thing. Zackfia is giving Royal Caribbean at least eight more months to get back into the water. Gordon is boosting his price target. If these are the neutral analysts, one can only imagine what the bullish ones are thinking.

When it's time to get back into the water, Royal Caribbean should also be the better performer. It has historically commanded higher margins than Carnival or Norwegian Cruise Line. And relatively healthier refund rates and improving booking trends will help fill the limited capacity that the industry will hit the open seas with when it does return in the coming months.

All three stocks could bounce back nicely in 2021 if the industry gets somewhat back to normal, but just as Royal Caribbean has performed the best during the downturn of 2020, it wouldn't be a surprise to see it be the one to continue leading the way as the operators sail forward in 2021.