In the battle of the coronavirus vaccines, experience is key.

Over the last few months, AstraZeneca (AZN -3.05%) and Moderna (MRNA -4.37%) have emerged as frontrunners in the race for a coronavirus vaccine. Both vaccine efforts are in the midst of the final phase of clinical trials, and both companies are forging international collaborations with competitors, nonprofit groups, and government entities. Early successes have given way to hard setbacks in the clinical development process, yet each contender has rallied to push forward.

Moderna is an unproven biotech without any products on the market, whereas AstraZeneca is a pharmaceutical behemoth with a long history of successful launches. This dynamic is precisely why producing an effective coronavirus vaccine may have dramatically different impacts on each company. Thus, to unpack which is the better coronavirus stock, it'll be necessary to place each company's vaccine effort in the context of its competitive position. 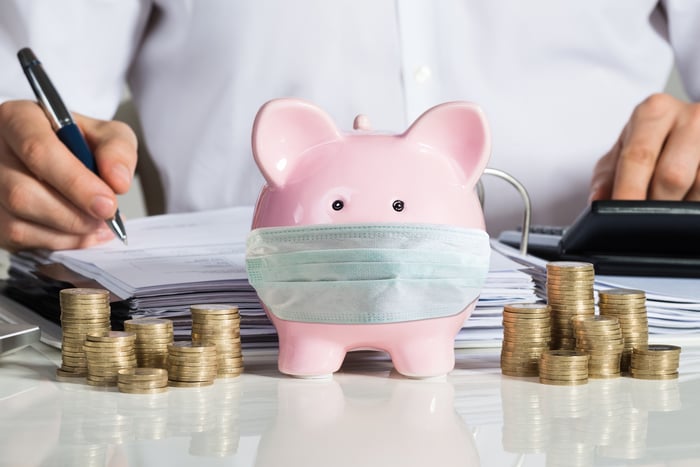 AstraZeneca is treading familiar territory with its coronavirus vaccine

AstraZeneca's SARS-COV-2 vaccine candidate AZD1222 is the only vaccine being developed in the company's massive pipeline of 166 clinical-stage projects. But AstraZeneca does currently produce a flu vaccine, so it's hardly a stranger to the later stages of the clinical trial process. Nor is AstraZeneca unfamiliar with maintaining the global supply and distribution chains that will be necessary for mass-scale production. In short, the pharma company has plenty of experience with all of the factors that it needs to operate smoothly to produce a profit from its vaccine.

AstraZeneca's global operations are already profitable, earning the company $25.7 billion in trailing-12-month revenue. This revenue is highly diversified, as the company's medicines compete in therapy markets ranging from oncology to neuroscience to gastroenterology. Year-over-year quarterly revenue is also growing at a modest but acceptable rate of 7.8%, driven by AstraZeneca's development and commercialization of in-demand drug products. If its coronavirus vaccine is approved for sale in major international markets, its revenue could grow substantially, but it's hard to see how much this growth could significantly change the company's overall trajectory one way or the other.

After all, AstraZeneca as a company isn't built around AZD1222. If the vaccine fails, there would no doubt be some fallout for its stock, but that failure wouldn't reflect on the chances of any of the company's other pipeline projects, so it wouldn't be catastrophic. Nor would vaccine failure detract from the company's existing revenue from established medicine brands, or its revenue growth in newly approved therapies. In the more probable situation where AZD1222 is a success, there's a good chance that AstraZeneca might end up putting a good portion of the proceeds toward its $22.12 billion of debt, rather than using it to grow.

If Moderna can make its vaccine work, it'll be on the road to becoming a juggernaut

Moderna's vaccine, mRNA-1273, is the company's most advanced pipeline program, and it's also its first project to reach phase 3 of clinical trials. As a result, Moderna is in uncharted waters, and it's learning about issues like large-scale clinical-trial operations and vaccine distribution logistics as it goes. This means that the company's efforts are at a high risk of inefficiency and setbacks stemming from inexperience, but it also means that it will be significantly more capable in the future.

If Moderna's vaccine is granted regulatory approval, it will be a transformative change for the company for two additional reasons. First, mRNA-1273 would be a source of recurring revenue, something Moderna has lacked so far, thereby opening the door to the company becoming profitable and growing even further. By extension, this would also give Moderna the ability to pay off its minimal debt and accrue more cash to finance acquisitions, which could eventually turn the company into a monster stock. Even if revenue is weaker than expected, Moderna would still be in a significantly stronger position than before the pandemic.

Second, success with mRNA-1273 would finally provide Moderna with undeniable proof that its technology platform is capable of producing medically useful therapies or prophylactics. This would make the other projects in its pipeline appear significantly more valuable to investors, which would translate directly to a higher stock price. Importantly, the market may have already priced in this outcome, so a late-stage failure with mRNA-1273 would likely be devastating for the company. 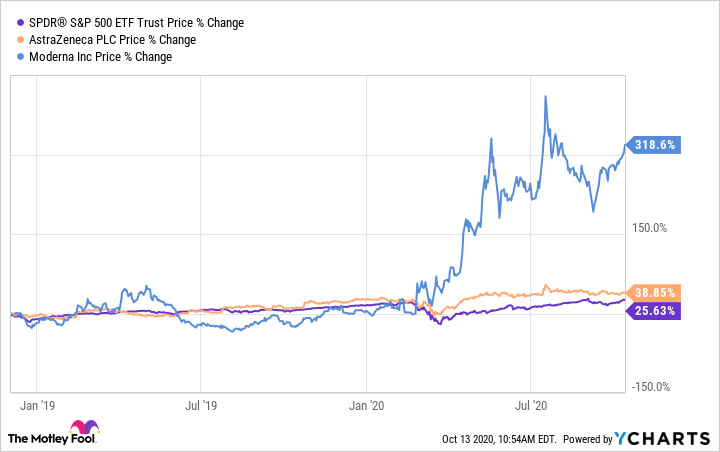 Which stock is better to buy?

For Moderna, the coronavirus vaccine project has higher stakes, and a failure may be highly damaging for shareholders, whereas a victory could catapult the company to much-needed long-term growth. In contrast, AstraZeneca doesn't need AZD1222 to succeed to retain its status as a profitable company, though the additional revenue would certainly be favorable for its investors.

AstraZeneca also has the manufacturing and distribution resources it needs to commercialize its vaccine in place already, whereas Moderna does not. This suggests that AstraZeneca would have an easier time generating earnings from its vaccine sooner than Moderna.

In my view, these factors make AstraZeneca the safer coronavirus stock, and it would be the one I'd pick if I had to choose between the two. On the other hand, Moderna's stock almost certainly has greater growth potential, even if it's significantly riskier. For me, there's too much riding on the company's vaccine project to invest in Moderna, but if your risk tolerance is higher, you might find it the more appealing choice.