The company is apparently eager to jettison unprofitable business divisions.

Uber (UBER 2.45%) is looking to get out of the aerial taxi and delivery business. A report published in Axios Friday, citing "multiple sources," said the ride sharing giant is "seeking strategic alternatives," for its Uber Elevate unit.

Elevate is the company's aerial technologies unit. It aims to put air taxis and drones to work delivering people and food. None of these services exist yet, of course, so the division is a cost center at the moment. According to Axios, Elevate currently employs around 80 people. 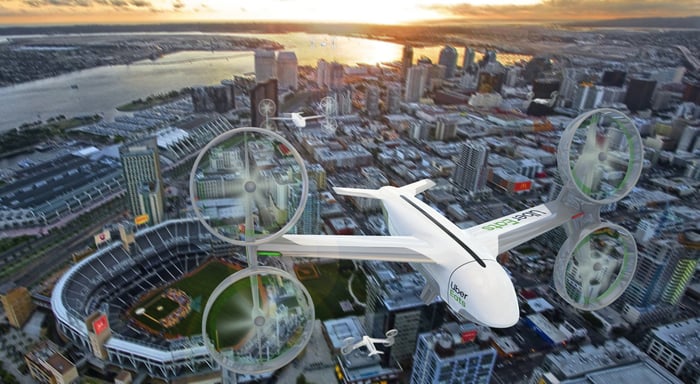 On the Elevate website, Uber writes ambitiously that it "is developing shared air transportation -- planned for 2023 -- between suburbs and cities, and ultimately within cities."

It adds that through its tech partners, it plans to operate fleets of small electric vertical takeoff and landing (VTOL) aircraft in Los Angeles, Dallas, and Melbourne, Australia.  The company does not specify how far along it is in this goal.

A sub-unit called Uber Copter is housed in Elevate. It launched last year with a helicopter shuttle service for well-heeled commuters, flying them between Lower Manhattan and JFK Airport in Queens. The company suspended the service after the coronavirus outbreak spread; there is no indication of when Uber plans to restart it.

According to Axios, Elevate's lack of revenue is a key reason why it's being considered for a divestment. "This reflects Uber CEO Dara Khosrowshahi's obsession with achieving profitability, as evidenced by partial sales of Uber's money-losing freight and self-driving units," the article states.

It is not known whether Uber is in talks with any potential investors about Elevate's "strategic alternatives." The article also did not mention a potential price for the unit, in the event of a sale.