The country's second largest cruise line has been cut by more than half in 2020. It still floats.

There's good news and bad news for Royal Caribbean (RCL -0.66%) shareholders. The good news is that shares of the country's second-largest cruise line operator have more than tripled since bottoming out in the middle of March. That's nice. The bad news is that the once lofty dividend is gone, and the stock has surrendered more than half of its value since the start of 2020. That's not so nice.

It's a scary time to own any cruise line. Royal Caribbean and rivals Norwegian Cruise Line Holdings (NCLH -0.48%) and Carnival (CCL 0.30%) (CUK -0.34%) haven't had a U.S. cruise set sail in more than seven months. They're hoping to start sailing again in December, but it's not up to them to decide that at the moment. There are deep uncertainties, but the payoff is pretty clear. If the industry gets back to where it was at beginning of this year -- in terms of consumer and investor mindsets -- all three of these stocks would more than double. Even if it takes a few years (and it will) to rebound, Royal Caribbean, Norwegian Cruise Line, and Carnival would probably beat the market in the next four to six years in that scenario.

Is Royal Caribbean worth the investing risk? Let's take a closer look at the potentially promising stock that just happens to have its back against the rock wall these days. Let's see if Royal Caribbean stock is a buy. 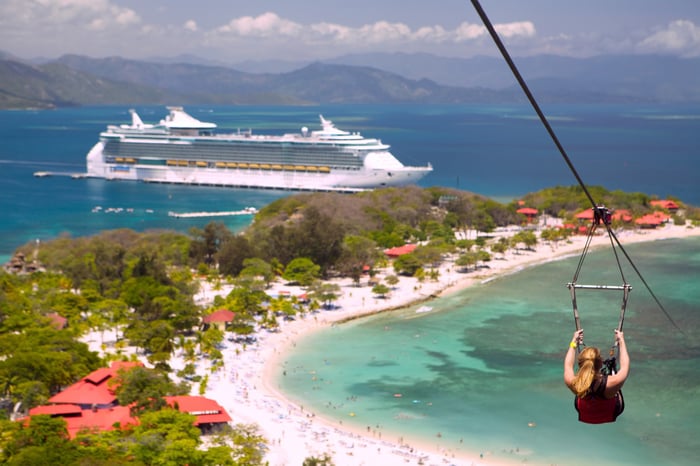 Royal Caribbean shares took a hit last week, tumbling after raising $1 billion through a secondary stock offering and a senior convertible notes sale. The dilution is going to leave a mark, but history will have a kinder take on financing if this liquidity makes the difference between surviving the downturn or running out of liquidity.

The cruise line operator is burning through $250 million to $290 million in cash a month with none of its ships generating revenue. This move just fed its mortality meter by as much as another four months. One analyst -- who is neutral on the stock as an investment -- thinks Royal Caribbean now has enough liquidity to get through at least another eight months of inactivity. And let's be frank -- if Royal Caribbean, Carnival, and Norwegian Cruise Line aren't sailing by next summer, they're probably as good as dead anyway.

U.S.-departing cruises may not happen in December as the plan currently suggests, but you can be sure that the moment the Centers for Disease Control and Prevention (CDC) finally eases up, all three stocks will climb on the news. If you're willing to stomach the risk, it's probably not a bad idea to get in this month in case the government doesn't extend the "No Sail" order that's currently in effect through the end of October.

Even if the CDC taps the brakes yet again and we're not sailing again until early next year, Royal Caribbean might still win as an investment from current levels. Analysts see Royal Caribbean returning to profitability by 2022. They see trailing revenue surpassing peak levels by early 2023. It may not be until 2025 when we get back to 2019 profit levels, but that jibes with the plan to get back to where it was at its peak in the next four to six years.

There will be more question marks than dirty plates after a midnight buffet. We don't know when we'll be over COVID-19. We now have to discount for the possibility of a new pandemic that will drag ships back into port. There's a recession that we need to clear. The industry will also have to win back passengers and convince folks that have never set sail that cruising is a fun and safe travel option.

If the industry is able to execute a turnaround, Royal Caribbean should be its biggest winner. It's not as large as Carnival. It's not as nimble as Norwegian Cruise Line. However, it has cranked out the healthiest margins in the industry. It also has a strong fan base. The risks have never been higher than they are right now, but Royal Caribbean is a buy at this point for patient investors who can see the open seas of opportunity. It will probably take a few years for the stock to double again, but in this climate with low interest rates and lofty valuations on growth stocks, it's a floating casino gamble worth taking.