Don't look now, but Zoom's valuation is approaching a monumental and ironic milestone.

2020 has certainly been the year of Zoom Video Communications.

As the coronavirus pandemic upended the lives of both businesses and consumers worldwide, Zoom Video became a preferred method of communication. Though not without competition, Zoom's simple, easy-to-use video conferencing interface has grabbed market share and equated the term "Zoom" with the act of video conferencing itself. If CEO Eric Yuan doesn't win Fortune magazine's CEO of the year, it would be a big surprise.

Zoom Video's stunning financial results, along with a healthy dose of market euphoria for growth stocks, have driven Zoom's stock to a stunning $159 billion market cap as of this writing. That nearly matches the $170 billion market capitalization of the company that rejected Zoom's product innovation ideas nine years ago. 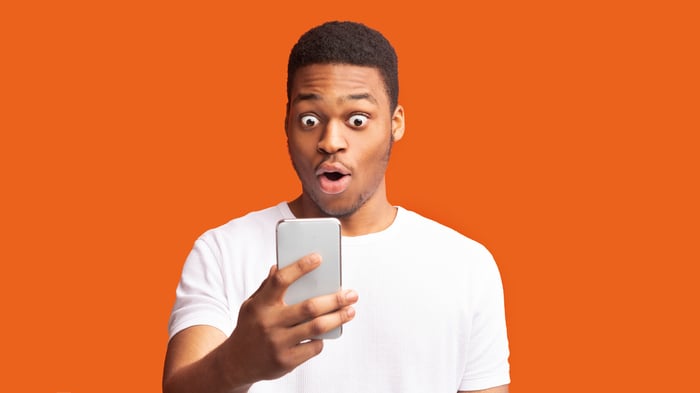 Cisco has a lot to answer for

For those who don't already know the story, Zoom CEO Eric Yuan used to work for networking equipment giant Cisco Systems. Though primarily known for its switches and routers, Cisco has also expanded into networking and corporate communications over the years.

That included the $3.2 billion acquisition of video software app Webex back in 2007. At the time, Yuan had been working for Webex for 10 years after joining the company in 1997. By 2011, he had risen to become Cisco Webex's vice president of engineering.

However, Yuan grew unhappy at Cisco, which he felt was not evolving Webex fast enough. Customers disliked the product, which they found difficult to use.

According to former Webex employee Matt Sheppard, Yuan and other executives found themselves marginalized at their new parent. "Eric was dismissed, along with the other leadership at Webex, as being kind of second-rate... [Zoom] was purely a reaction to them not listening to him."

Yuan left Cisco and took 40 engineers with him to establish Zoom.

The marginalization of Webex's leadership post-acquisition is one of the biggest blunders in modern corporate history, given Zoom's massive success -- at Webex's expense -- since its 2019 initial public offering: 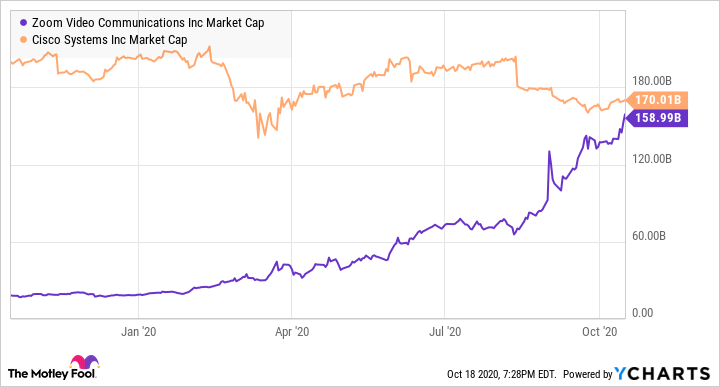 Zoom appears to have the momentum, especially after its recent analyst day. Zoom presented more information on new products, such as the Zoom Phone, and also raised its long-term operating margin target to 25% from 20%.

Zoom has also reported ridiculous growth numbers this year, as the pandemic has boosted the videoconferencing space overall. Unfortunately for Cisco, the pandemic has also caused companies to reduce on-campus networking and in-house enterprise data centers, or has at least spurred a move to the public cloud, which is more competitive:

It's difficult to pick the better buy today, and the choice will likely come down to what kind of investor you are.

Zoom Video, for all its success, is outrageously expensive and pricing in all sorts of wonderful news well into the future. In order to justify its current valuation, it will have to enter new markets besides video conferencing. That may happen, but I wouldn't be willing to pay up for all that good news today. Nevertheless, I've thought Zoom was too expensive all this year, and have been proven wrong over and over.

On the other hand, Cisco's low valuation and hefty 3.7% dividend may appeal to value investors. Still, investors need to be careful of buying into a value trap in which a company looks very cheap but continues to decline amid competitive disruption.

Cisco is facing an assault not just in its ancillary video conferencing business, but also in cybersecurity and even its core switching and routing products. As a large and mature company, I worry that Cisco will be fighting to hold on to its current businesses for the foreseeable future. Its rejection of Yuan's input makes me question its leadership and culture.

Frankly, I am avoiding both stocks.

A symptom of this market

Imagine if Cisco had empowered Yuan, rather than stifling Webex's independence with a top-down, bureaucratic posture? Cisco could be worth double what it is today.

The lesson here isn't so much about buying or selling Zoom or Cisco; rather, it's that when looking at technology companies, company culture is paramount.

If a company retains its entrepreneurial spirit even when it becomes large, there's almost no limit to how much it can grow. However, if a large company falls into a static bureaucracy, missed opportunities can cost it dearly. Keep that lesson in mind when analyzing the next tech company for your portfolio -- it could make a huge difference in your future returns.