It's easy to underappreciate just how much progress has been made in researching SARS-CoV-2, the novel coronavirus that causes COVID-19. During the last major pandemic to hit the U.S. (the 1918 influenza pandemic), scientists didn't even conclusively determine that a virus -- instead of a bacterium -- caused the deadly flu until 1930, more than a decade after the end of the pandemic.

Earlier this year, the genomic sequence for SARS-CoV-2 was mapped. That paved the way for the development of diagnostic tests as well as potential treatments and vaccines. The progress has been astounding compared with previous viral outbreaks (and not just those from a century ago).

A team of U.K. researchers recently unveiled a new major development that just might be a game-changer in how COVID-19 is treated. And there's one stock that's most likely to win from this latest breakthrough. 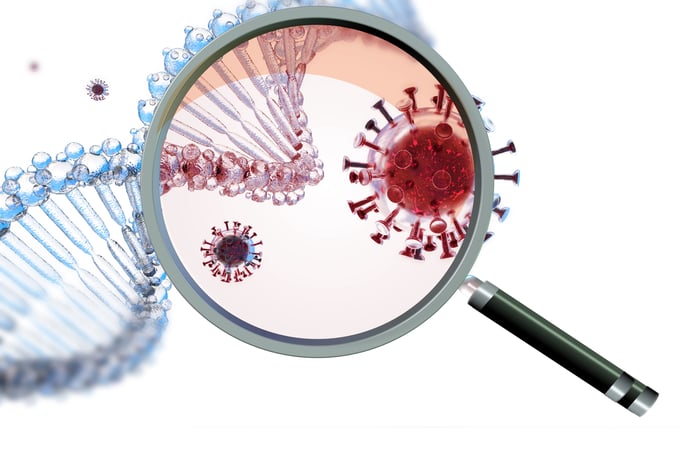 One of the characteristics of SARS-CoV-2 is how it affects different patients so differently. Most people infected by the novel coronavirus experience few, if any, symptoms. But other individuals are hit very hard by the virus, with many of them requiring hospitalization. While elderly people and those with certain pre-existing conditions have the highest risk of experiencing severe symptoms, there are plenty of exceptions.

The answer to why there's such a discrepancy between outcomes lies, unsurprisingly, in the genes of individuals. The U.K. researchers think they've identified several specific genes that are linked to severe cases of COVID-19.

For example, a variant of the IFNAR2 gene appears to increase the risk of developing severe COVID-19 symptoms by around 30%. This gene codes for the production of the interferon protein, which plays an important role in the body's immune system.

The scientists also found that OAS gene variants could be just as big of a factor in causing severe COVID-19 cases as the IFNAR2 gene variant. OAS genes code for the production of proteins that are particularly involved in the immune system response against viral infections.

In addition, the U.K. team discovered that several other genes could be key to why some patients experience worse inflammatory responses after being infected by the novel coronavirus. Two of these genes are DPP9 (which codes for the production of an enzyme involved in lung disease) and TYK2 (which codes for a protein involved in inflammation).

But the most likely winner from the research into genetic links that impact the severity of COVID-19 isn't a drugmaker. Instead, it's the company that makes the technology most often used to determine whether or not an individual has the gene variants that could lead to more serious symptoms. That company is Illumina (NASDAQ:ILMN).

When the U.K. announced a new initiative earlier this year to explore genetic factors related to COVID-19, it chose Illumina as its genomic-sequencing partner. The research that identified the latest genetic links to COVID-19 used data from the U.K. Biobank population study. Which company was the sequencing technology provider for this study? Yep, Illumina.

Its gene-sequencing systems dominate the market. If a given individual's genome needs to be sequenced to identify specific genetic variants, there's a very good chance that Illumina's technology will be used. Based on the recent findings by the U.K. scientists, it seems quite possible that personalized medicine based on individuals' genetic profiles will play an important role in the future of COVID-19 treatment.

Before you rush to buy shares of Illumina, though, there are a few caveats to keep in mind.

The findings from the U.K. team haven't been peer-reviewed yet. So far, the research has only been published on medRxiv, an online website where health sciences articles can be posted before they're printed in a major scientific journal. Even after the research is peer-reviewed, more research will be needed.

Also, while Illumina could benefit from increased genomic testing of COVID-19 patients, there's more going on for the company right now. The healthcare stock hasn't performed well so far in 2020 due to the business disruption caused by the pandemic.

Illumina is also in the midst of an acquisition that hasn't made Wall Street happy. The company announced last month that it plans to buy GRAIL for $8 billion. The cancer diagnostics start-up was originally founded by Illumina in 2016, then spun off as a separate entity.

But the research about potential genetic links to COVID-19 could boost Illumina's fortunes. And the recent breakthrough findings could be just the tip of the iceberg. Future research could find more genetic links to other diseases, fueling higher demand for genomic sequencing. Illumina should be a winner over the long run, even if the genetic studies for COVID-19 aren't as game-changing as they could be.