Credit risk isn't the only issue hurting financial companies, as this fintech shows.

The financial sector has been a lousy place for investors this year. Between the banks taking big provisions for loan losses and the real estate investment trusts (REITs) dealing with tenant delinquencies, it's been a struggle. Unlike most of the financials, Fiserv (FISV 0.22%) doesn't make its money taking credit risk -- it's a fintech company that earns fee income from the services it provides. Does a lack of credit exposure mean Fiserv is a better buy? 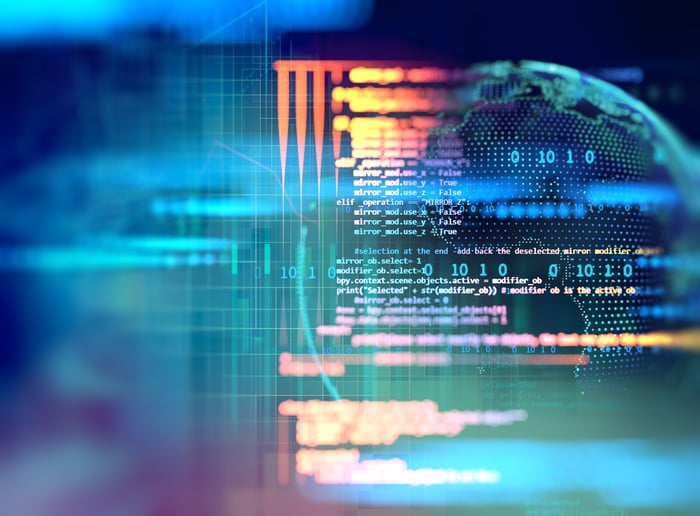 Merger synergies will be a big driver of earnings

Fiserv offers electronic payment processing, retail point of sale, and e-commerce services, some of which it added through its acquisition of First Data in July 2019. It added the Clover point-of-sale operating system through that merger, and it partners with Early Warning Services to offer the Zelle brand of person-to-person payment technology.

Falling retail sales have affected Fiserv during the COVID-19 pandemic; while year-over-year comparisons have been difficult because of the First Data merger, internal revenue growth (that is, organic growth) fell about 7% in the second quarter. On the earnings call, Executive Chairman Jeffery Yabuki said, "At our May 7th call, we shared our thesis that April would be the likely trough and we expected to see gradual improvement from there, and that is exactly what has happened. Each month revenue has improved sequentially from the lows of April and culminated with a return to internal revenue growth in July."

Going forward, synergies from the First Data merger should boost earnings. Synergies generally come in two flavors: revenue and cost synergies. Cost synergies are the most common, and involve cost cutting by eliminating redundant functions. Examples of cost synergies would involve the elimination of duplicate investor relations functions, or other overhead. Revenue synergies are cross-selling opportunities, which are often hard to quantify and even harder to realize. Fiserv expects to realize about $1.2 billion in synergies from the merger, and so far has realized $750 million through July.

On the conference call, CEO Frank Bisignano said that the company expected to earn adjusted earnings per share of $4.33 for 2020, adjusted for divestitures. This works out to be a price-to-earnings ratio (P/E) just under 23 times at Wednesday morning's prices. Below is a chart of Fiserv's P/E ratio for the two years before the First Data merger. 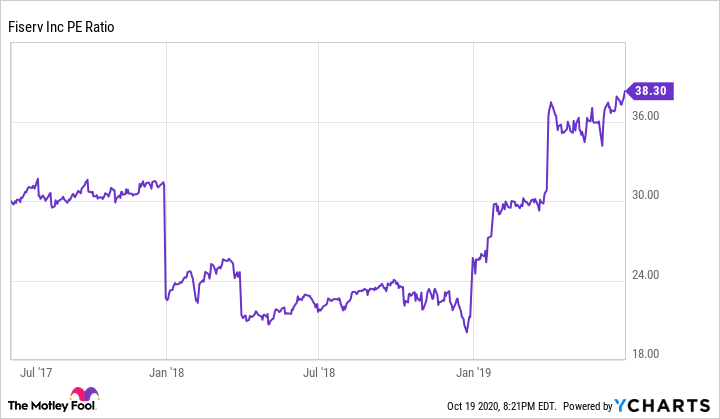 As you can see, the current forward P/E around 23 is toward the bottom of the pre-merger range. The Street expects Fiserv to earn $4.40, which is a little better than the company guided on the second-quarter call. The current estimate for 2021 earnings is $5.38 per share, which represents 22% earnings growth and puts the company's P/E to growth (PEG) ratio right around 1. Legendary investor Peter Lynch was a huge fan of stocks with PEG ratios at 1 or below.

Debt and intangible assets are a negative

That said, Fiserv has a lot of debt, around $21 billion worth. The debt burden doesn't appear to be an issue since Fiserv generated almost $900 million in free cash flow in the second quarter and has about $1.1 billion in debt maturing in the next two years. In addition, interest expense was covered over 7 times last year by EBITDA (earnings before interest, taxes, depreciation, and amortization). That said, the debt isn't the only balance sheet issue: Nearly $40 billion of the company's assets are intangible assets like goodwill, which are extremely hard to monetize. They certainly stick out when book value is only $33 billion to begin with.

So, is Fiserv a buy? Valuation-wise, Fiserv is certainly trading toward the low end of its P/E range, and has an attractive PEG ratio. I doubt a long-term investor would be making a mistake buying the company at these levels. That said, I would rather get involved once the smoke has cleared from COVID and we start seeing stronger consumer spending. Until then, the stock will probably correlate with the rest of the financial sector.