Spoiler: They're not red-hot tech stocks.

The stock market stumbled into Friday on a negative note, with early gains giving way to modest losses by the late morning. Market participants continued to watch Washington to see whether lawmakers would be able to reach a consensus on spending more money toward supporting the economy, but there wasn't progress that was immediately evident. Shortly before noon EDT, the Dow Jones Industrial Average (^DJI -0.38%) was down 89 points to 28,275. The S&P 500 (^GSPC -1.03%) eased lower by 3 points to 3,451, and the Nasdaq Composite (^IXIC -1.59%) fell 44 points to 11,462.

Yet that didn't stop a couple of stocks from producing big gains following their most recent quarterly earnings reports. Boston Beer (SAM -3.36%) has been a crowd favorite recently, and its stock pushed above the $1,000-per-share mark for the first time ever after another strong quarterly report. Meanwhile, raw materials provider Cleveland-Cliffs (CLF -0.14%) also pushed ahead after telling investors how it did over the past three months.

This round's on Sam Adams

Shares of Boston Beer got a big lift on Friday, rising 15%. The brewing company famous for the Samuel Adams brand has seen a lot of success lately, and despite the company's name, beer hasn't really been the designated driver of the stock's big gains.

The brewer said that COVID-19 has had a mixed impact on its business. Keg sales have fallen dramatically due to restrictions on bars and other drinking establishments. However, the stay-at-home environment has supported its innovative beverages, including Truly Hard Seltzer and Twisted Tea. By contrast, Samuel Adams, Angry Orchard, and Dogfish Head have seen decreased demand.

Boston Beer expects to keep innovating, with new items across its brand spectrum. Of particular interest will be a combination iced tea and hard seltzer from Truly, which aims to cash in on interest in the product line.

Coming into the quarterly report, some investors were nervous about Boston Beer's ability to keep outperforming. Those worries seem unfounded today, and shareholders are ecstatic about what the brewer has been able to accomplish under difficult conditions. 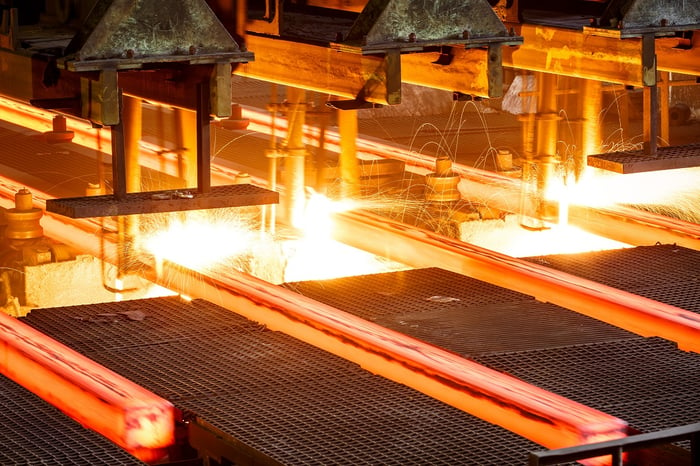 Elsewhere, Cleveland-Cliffs saw its stock rise 6%. The newly expanded steel company had a solid quarter as it continues to transform itself from its prior business model.

Until recently, Cleveland-Cliffs had concentrated on supplying iron ore to steel company customers. However, it decided it would acquire AK Steel to become a vertically integrated producer in its own right.

That move showed up in the company's numbers for the third quarter. Revenue nearly tripled from year-ago levels. Cleveland-Cliffs' year-ago profit nearly disappeared in this year's quarter, but investors were pleased to see signs that the cyclical downturn in steel production seems to be turning itself around.

Moreover, Cleveland-Cliffs is set to grow further. The company said late last month that it would purchase the U.S. assets of international steel giant ArcelorMittal. That'll make Cleveland-Cliffs even bigger.

Cyclical stocks make up a sizable portion of the overall stock market. If companies like Cleveland-Cliffs start performing well, it could be an opportunity for an entirely new move higher for the broader market.