Shares of Cleveland-Cliffs (NYSE:CLF) are up 6% today as of 3:20 p.m. EDT, after jumping over 9% earlier in the trading session. The iron ore and steel producer, which released its third-quarter earnings early Friday, had previously announced two transformational acquisitions in 2020.

The company said in its Q3 earnings report that it had total revenue of $1.6 billion, including $1.3 billion from its steel and manufacturing segment. It said 73% of that revenue came from the rebounding automotive sector. 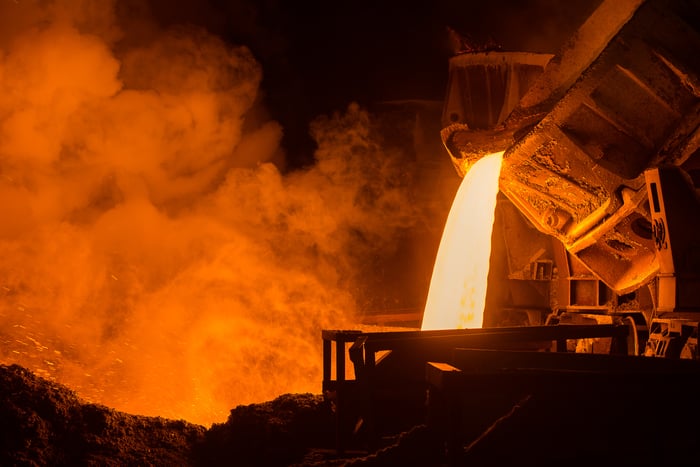 The market reaction is most likely due to the positive outlook given by the company's chairman, president, and CEO, Lourenco Goncalves. In a statement accompanying the earnings results, he said the company expects "further sequential improvement in our adjusted EBITDA performance in the fourth quarter."

Formerly a raw material supplier to the steel industry, Cleveland-Cliffs completed an acquisition of steelmaker AK Steel in March 2020, and it also recently announced plans to purchase the operations of ArcelorMittal USA, the U.S. subsidiary of global steelmaker ArcelorMittal, for $1.4 billion.

Goncalves said the automotive customer base, which largely came through the AK Steel purchase, is placing orders at "a remarkably healthy pace." With his company's operations normalizing and current strength in pricing, the steel sector appears to be in an upswing. Peers Nucor and Steel Dynamics both also reported strong third-quarter earnings recently and gave similarly positive outlooks.

Cleveland-Cliffs expects its acquisition of the ArcelorMittal USA operations, which should bring an additional $10 billion of annual revenue, to close before the end of this year.