Shortly after its IPO in August, Nano-X Imaging (NASDAQ:NNOX) stock was up more than 180% on investors' hype over its claim that it had developed an innovative digital X-ray imaging system. Fast-forward two months, and the stock is down nearly 50% from early all-time highs, and many investors are disgruntled over allegations that the company is wrapped up in an elaborate fraudulent scheme.

Indeed, not all innovations are legit, but neither are all allegations of criminal activity. Today, let's look at three red flags for Nano-X's future, and why you definitely should not hurry to buy the stock on its dip. 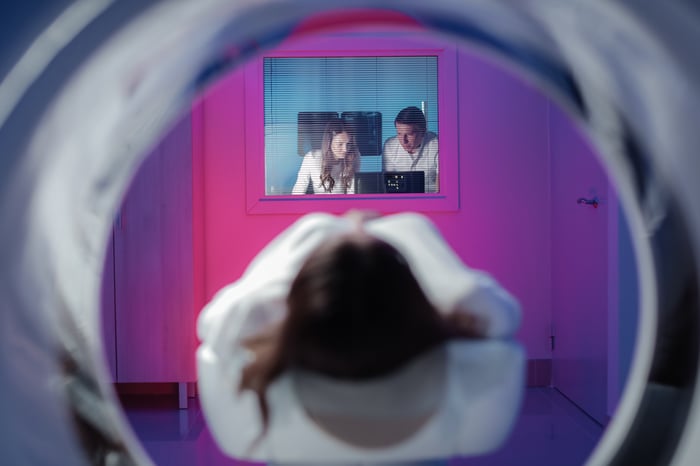 Whenever a company announces a breakthrough technological development, investors should immediately dig through its press releases and official reports to see which universities, scientific journals, or researchers have vouched for it. Unfortunately, a quick deep-dive into Nano-X's history by short-seller Citron Research found no scientific paper that backs the company's claims of revolutionizing X-ray imaging.

Finding a low-cost alternative to X-rays, CT scans, and MRIs is an aim of almost every single sector player in medical imaging. This begs the question: How is it that Nano-X achieved its advancement after spending just under $3.4 million on research and development (R&D) in the past two years? It seems highly unlikely that a thinly capitalized company founded in 2018 could discover a groundbreaking change in X-ray technology when the entire scientific community has not been able to figure out a lower-cost solution for the past 120 years. Keep in mind that Nano-X has not launched its product in any hospitals, has zero revenue, and posted a net loss of $13.8 million during the first half of 2020.

The mystery only deepens from here. Another short-selling firm, Muddy Waters, discovered that Nano-X's financial consulting team is run by a convicted felon, Eli Reifman, who ran an $8 billion market cap tech start-up called Emblaze to the ground. In 2009, Reifman defrauded an investment fund for a $3 million loan by using fake ownership documents of Emblaze stock as collateral.

The firm alleges that Reifman was frequently part of pre-IPO meetings for Nano-X, which may explain the controversy surrounding its science. The report by Muddy Waters indicates that former Emblaze employees are also part of Nano-X's executive team.

If the company's technology isn't shady enough, the proposed device's path to approval is even more confusing. In January, the company submitted a 510(k) application to the U.S. Food and Drug Administration (FDA) for approval of its Nano-X device. However, the 510(k) channel is not for novel inventions, but for devices that are already "substantially equivalent to a legally marketed device."

The bar is extremely low for approval of a 510(k) application; the FDA approves more than 80% of requests. Many products eventually have their authorization withdrawn due to high failure rates post-commercialization. The process also costs less than one-third of a novel product submission. It should strike investors as "strange" that Nano-X is seeking to have its device approved under the 510(k) channel. Nano-X had initially claimed in a company presentation that its imaging devices would be "significantly smaller" and "substantially more cost-effective" than those available.

Because significant doubts surround its financials, management, and science, it is extremely difficult for investors to take Nano-X's statements seriously. One important rule of thumb in investing is to never to buy a stake in a company you can't trust. In the context of Nano-X, I believe that this rule applies perfectly. It is much wiser to invest in healthcare stocks other than this development stage company with a $1.3 billion market cap and more woes ahead.