The streaming service has already surpassed even the wildest expectations for its success. This could be just the beginning.

Walt Disney's (DIS 3.49%) entry into the streaming landscape, Disney+, is already years ahead of schedule in terms of subscriber growth, but that could be just the beginning. The platform might be on the verge of another catalyst with the upcoming release of season two of its smash hit The Mandalorian, which premieres on Friday.

The company announced during its third-quarter conference call that as of Aug. 4, Disney+ had surpassed 60.5 million paid global subscribers, a threshold it didn't expect to crest until 2024. Much of its early success has been attributed to the popularity and critical success of The Mandalorian, the latest entry in the Star Wars universe. 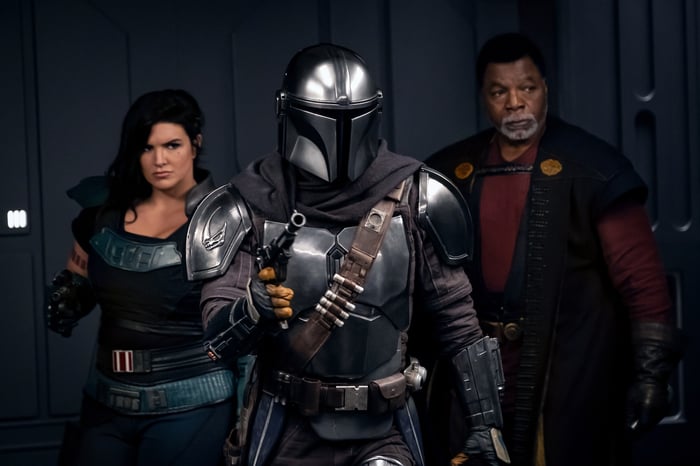 (Left to right) Gina Carano as Cara Dune, Pedro Pascal as the Mandalorian, and Carl Weathers as Greef Karga in season two of the Disney+ original, The Mandalorian. Image source: Disney+.

The Mandalorian is a "hugely popular and a critical show," according to Bank of America analyst Jessica Reif Ehrlich, helping drive viewer demand and subscriber growth. CFRA Research analyst Tuna Amobi echoed that opinion, saying he expects the coming season to be another critical and commercial success. "It's really hard to know how much of an impact any given show can have on subscriber growth, but ... I think it's fair to say we're going to see major acceleration in subscribers," he said.

As part of its initial launch last year, the service partnered with Verizon Communications, which offered a year of Disney+ free with certain unlimited data plans. The first of those plans is set to expire on Nov. 12, the one-year anniversary of the debut of Disney+. Rosenblatt Securities analyst Bernie McTernan believes the company is operating from a position of strength. "We think having The Mandalorian season two coming out before the first batch of the Verizon promos expire will be a positive," he said.

The company recently announced a strategic reorganization, with a greater focus on streaming, citing the rapid success of Disney+.