It isn't his traditional fare, but it might still be up his alley.

As the maker of the da Vinci robotic surgery suite, Intuitive Surgical (ISRG -2.38%) doesn't fit the mold of a traditional Warren Buffett stock. The company needs to spend a significant portion of its revenues on research and development (R&D) in order to stay competitive. Its selling, general, and administrative (SG&A) costs are also quite high -- both of which would be red flags for Buffett. While it isn't the only robotic surgery company, Intuitive's market capitalization of around $88 billion makes it by far the largest, meaning that it may need to maintain or accelerate its pace of innovation to prevent smaller competitors from stealing its market share.

But, thanks to the company's customers in hospitals who need maintenance and replacement parts to use their da Vinci robotic surgery machines, Intuitive does have a substantial competitive moat. Furthermore, though its earnings and revenue growth haven't been consistently positive, the company is profitable, cash-rich, and debt-free, all of which are traditionally favored by Buffett.

Could Intuitive be a new type of Buffett stock for the 21st century, blending high-tech development with locked-in customers and a strong competitive position in a growing industry? 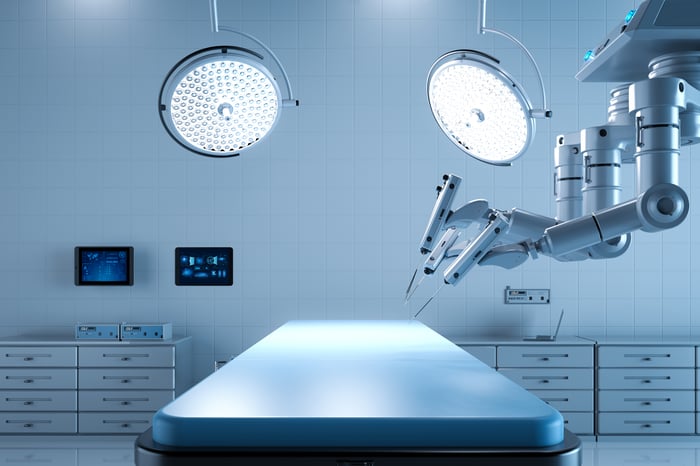 The case for Intuitive as a Buffett stock

Intuitive's competitive position is probably something that Buffett would appreciate. The robotic surgery industry is difficult for new competitors to enter, as developing a robotic surgical system requires years of R&D and millions or billions of dollars of investment. Customers in hospitals face a high cost to switch between competing products, as surgeons require a substantial amount of time to be trained on each robotic system before they're qualified to perform operations. At the same time, customers have little bargaining power to drive down prices, as for the moment there are few robotic surgery suites to choose from. This also serves to keep the industry's intensity of competition quite low, reducing the chance of price wars.

Though the threat of substitute products from lower-cost competitors is significant, as non-robotic surgeries may be less expensive and more easily accessible, this may not be the case forever. If using a robotic surgical suite allows surgeons to perform operations that are so complex that they are impossible for unassisted human effort to replicate, the risk of substitute products will plummet.

In the last 12 months, Intuitive brought in around $4.3 billion, and thanks to its installed base of systems, as much as 72% of Intuitive's revenue is recurring. Surgical instruments and accessories are estimated to make Intuitive as much as $3,500 per procedure, and service contracts can go up to $190,000. Finally, its total revenue has also risen significantly in each of the last seven years.

Intuitive still has a few sticking points that might dissuade Buffett. First and foremost, Intuitive's competitive moats might be strong enough to protect its profit margin for the next few years, but it's highly unlikely that the robotic surgery industry will remain static forever. Once new competitors produce surgical systems that can perform the same types of procedures as Intuitive's products, real competition will begin. This will likely cause Intuitive to increase its spending on R&D to maintain its advantage, which will drive its margin down.

Similarly, Intuitive is in a capital-intensive business, as shown by its significant and consistent capital expenditures that totaled $110 million in the second quarter alone. Buffett would also likely take issue with the fact that these capital expenditures may increase if the company creates new product lines to sell to its customers.

Nonetheless, I think that Buffett would probably want to buy Intuitive -- at least, if he had known about it a decade or so ago when its competitive position was just as strong and the industry was even less developed. Moving forward, Intuitive still has a handful of the competitive characteristics that Buffett seeks, but the specter of rising competition would probably make him think twice about investing for the long term. Even though Intuitive is a significantly more dynamic and high-tech company than Buffett's bread and butter, I think he'd be willing to bet on it.