Twilio (NYSE:TWLO) reported third-quarter earnings after the market close on Monday, and while the numbers were better than expected, the results were met with a collective yawn. The company, which provides the tools to help businesses communicate better with their customers, exceeded even the most enthusiastic projections, but the stock dipped following the results.

Riding on the tailwinds of strong cloud demand

Revenue climbed to $448 million, up 52% year over year, sailing past the high end of management's forecast, which topped out at $406 million. The company also delivered a surprise profit, with adjusted earnings per share of $0.04, far better than the loss per share of $0.05 it expected. To put those numbers in context, analysts' consensus estimates were banking on a loss per share of $0.03 on revenue of $409.9 million.

Beyond the headline numbers, Twilio's strong customer adoption helped drive its top-line growth. The company reported more than 200,000 active customers to close out the quarter, up 24% year over year. It also continued to expand its relationship with current customers, as evidenced by its dollar-based net expansion rate of 137%, accelerating from 132% in the prior-year quarter. Put another way, existing customers, on average, increased their spending by 37% year over year.

Earlier this month, Twilio announced it would acquire Segment, a market-leading customer data platform, in a deal valued at $3.2 billion. Segment helps businesses collect customer information from a variety of systems and sources, pulling it all into one place. This way, the data can be better analyzed to provide marketing, sales, and service departments with data-driven customer insights.

On the conference call to discuss the results, Twilio CEO Jeff Lawson had this to say about Segment: "By bringing together the understanding of the customer, that's customer data, that's Segment, with actually engaging with them, touching those customers; getting them relevant, timely, and impactful communications, [they'll] actually be more loyal and happier customers."

Investors looking for insight into how this could benefit Twilio over time should consider its acquisition of SendGrid last year. During Q1 2019, SendGrid added $29 million in revenue to the company's coffers, and by cross-selling and upselling to its customer base, that number soared to $54 million by Q4 2019, an increase of 86% in less than one year. Given its track record, the Segment acquisition could be similarly lucrative. 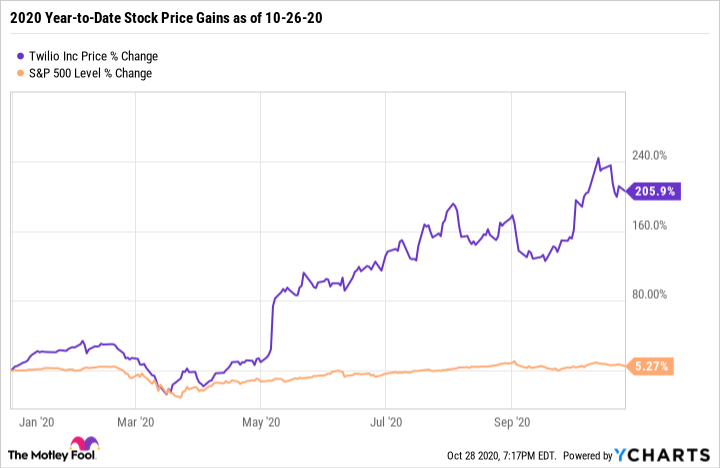 The stock market's reaction to Twilio's results might seem somewhat surprising, given the company's better-than-expected performance, but it's important to put it in context. Twilio is clearly a growth stock, having started out 2020 at $100 per share and getting above $300 going into its earnings report, representing gains of more than 200% -- even as the S&P 500 increased a pedestrian 7%.

And given its meteoric rise, Twilio's valuation had become somewhat frothy, which isn't unusual for a high risk, high reward stock. Just prior to earnings, the stock was priced at 27 times forward sales, when a reasonable price-to-sales ratio is between 1 and 2.

Viewed through the lens of its year-to-date performance and its nosebleed valuation, it isn't surprising that Wall Street shrugged off the results. But long-term investors will recognize that the investing thesis for Twilio will play out over years and decades, not from one quarter to the next.