Mattel has gotten itself back on track, and it is no longer playing around.

Often, a struggling company gets cast aside by investors, receiving little positive attention. This often is the case even after there are signs that its operations are turning the corner.

This creates a compelling value opportunity. But it is a tricky proposition. After all, you certainly don't want to invest in a company only to see its results falter again, and the stock price get punished.

Mattel's (MAT -0.47%) shares have produced a 4% gain this year after a strong increase following the company's third-quarter earnings release. This is still lower than the S&P 500's 5% increase, however. So, while the pandemic hurt its results earlier this year, Mattel looks like it is back on track. 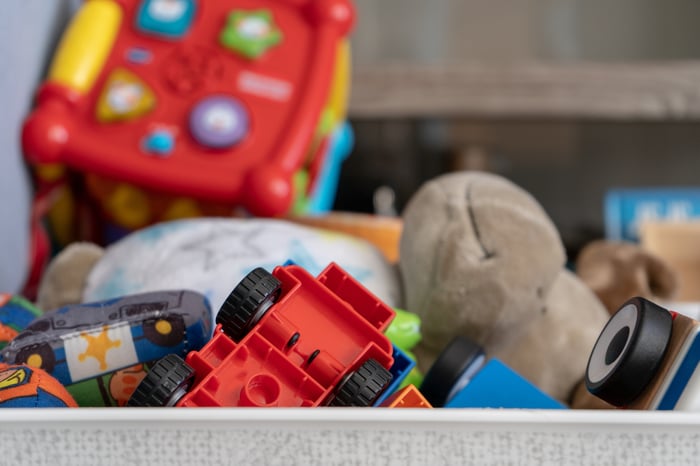 Turnaround back on track

The company's sales were in a multi-year slide, going from 2015's $5.7 billion to $4.5 billion last year. The company was facing challenges, notably the Toys "R" Us bankruptcy in 2018 that forced that retailer to shut its doors permanently. It was also contending with other issues, such as competing with other entertainment mediums, including digital products like video games and phones, for the share of the consumers' wallets.

While everybody knows about the Barbie franchise, Mattel also has a host of other well-known brands, such as Hot Wheels, Fisher-Price and Thomas & Friends, and American Girl. Collectively, Mattel refers to them as its "power brands," and a key part of management's turnaround plan is to grow them.

With these well-known brands, it makes sense to build them up. Fortunately, there is evidence this is working. Mattel's 2019 sales were flat compared to 2018, showing stabilization. In particular, Barbie and Hot Wheels continued to perform well with a 7% and 11% sales increase, respectively.

COVID-19 presented Mattel with several challenges, including on the distribution front. The virus forced retail stores to close to the public, and that made it more difficult for consumers to get the goods. No wonder its second-quarter sales and profit fell. However, this came back strong in the third quarter, with Mattel's sales up by 11% year over year after removing the effects of foreign currency translations.

Certainly, the remaining part of its power brands, Fisher-Price and Thomas & Friends, and American Girl, have been laggards and need to pick up the pace. But it is encouraging that the company's sales grew strongly without getting these two on track.

Meanwhile, parents and kids are online more than ever for work and school as the pandemic rages on. It seems people are getting fatigued with the computer and returning to physical games. This bodes well for Mattel's other products, as sales of items like Uno and Pictionary were strong in the recent quarter.

Management has also done a nice job on the expense front while executing its plan. Through its cost-savings initiative, Mattel has expanded its gross margin and grown its operating income at a faster clip than sales.

In the most recent quarter, the company's adjusted margin was 51%, more than four percentage points better than a year ago. With better sales, gross margin, and lower selling, general, and administrative costs, Mattel's adjusted operating income rose by over 130%.

Since its results are moving back in the right direction, the company's shares won't remain overlooked for too much longer, as the recent stock price move attests. Of course, it will garner even more attention as Mattel continues to execute on its plan.

Should You Buy Mattel After Disney Toy Deal?
413%