Despite the recent rise in COVID-19 cases, continued elevated unemployment, and lack of economic stimulus, the stock market has rebounded nicely from its 2020 lows. In fact, even after the recent market decline, the S&P 500 is still higher for the year.

However, the financial sector has been a major laggard. As of Nov. 2, the Financial Select Sector SPDR ETF (NYSEMKT:XLF) was still down by more than 20% year-to-date. Many of the biggest U.S. banks are doing even worse, in terms of their stock prices. Bank of America (NYSE:BAC) is one of the most improved banks in the U.S. in the decade or so since the financial crisis, but with a 32% decline this year, what should investors expect over the next year and beyond? 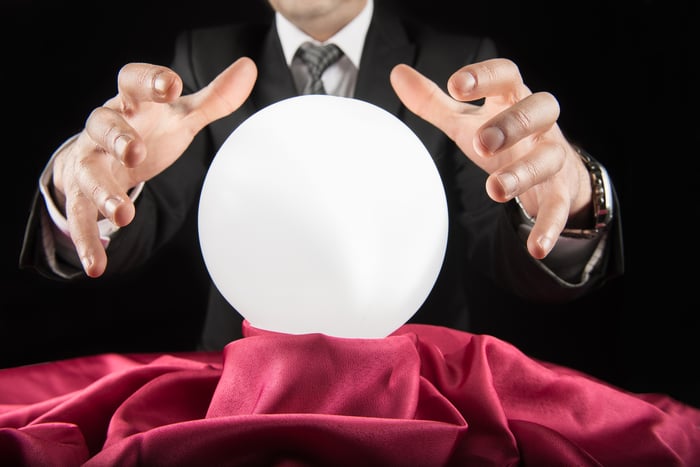 Where Bank of America is now

As mentioned, the financial sector hasn't exactly been an excellent performer in 2020. Not only have record-low interest rates made it more difficult for banks to make money, but elevated unemployment could lead to a wave of loan defaults, resulting in billions of dollars in potential losses.

In the third quarter, Bank of America's revenue declined by 11% year-over-year with a 17% decline in net interest income (NII) fueled by low interest rates, offset by strong investment banking performance (which tends to perform well in volatile markets).

However, it's worth noting that aside from the current affects of the pandemic, Bank of America has been doing very well in recent years. The company has emerged as a leader in mobile and online banking functionality and has dramatically improved efficiency and profitability. For the full year of 2019, Bank of America produced a 11.3% return on equity (ROE), 1.21% return on assets (ROA), and a 58% efficiency ratio -- and numbers like these would have seemed unthinkable for the bank just a few years prior.

Plus, Bank of America has rapidly become Warren Buffett's favorite bank stock. In one of Berkshire Hathaway's (NYSE:BRK.A)(NYSE:BRK.B) first pandemic-era investments, Buffett and his team spent over $2 billion adding to its already-massive position, now owning about 12% of the bank.

Unanswered questions that will determine Bank of America's performance

There are literally hundreds of things (if not more) that could influence Bank of America's stock price over the next year. But here are some of the most important:

Nobody has a crystal ball that can tell you where any stock will be in a year, and I'm certainly no exception. However, Bank of America is a solid and well-run institution that has dramatically improved its asset quality and business efficiency over the past decade, and nothing that has happened or will happen is going to change that. Bank of America's stock price could be lower in a year or it could be much higher -- but over the long run, I've invested a considerable amount of my own money in my belief that Bank of America will generate excellent returns.