One might think of Microsoft (NASDAQ:MSFT) and International Business Machines (NYSE:IBM) as two companies with numerous commonalities and sometimes, a shared history. Microsoft supplied the operating system for the IBM PC beginning in 1980.

The two tech stocks have focused on different aspects of IT for most of their history. However, their interests appear to have converged again in the cloud. Both companies elevated their previous cloud head to the CEO position. Now, Microsoft has built a cloud infrastructure business second only to that of Amazon in size. Although IBM did not move as quickly, it has developed a niche in the hybrid cloud.

Grand View Research forecasts a compound annual growth rate for the global cloud market of 15% through 2027. This bodes well for both companies, but which cloud company holds more potential for investor returns today? Let's take a closer look to see which company could better enrich its stockholders.

When Satya Nadella became Microsoft CEO in 2014, he inherited a tech company that had seen its primary revenue driver fall into decline. A near-monopoly on PC operating systems that began with the company's initial deal with IBM sustained Microsoft's growth for decades. The decline began when smartphones and tablets made PCs less of a necessity. However, seeing an opportunity for growth in the cloud, Nadella shifted the company's focus to the growing cloud infrastructure market.

His approach has turned into a huge success. Microsoft stock has risen more than fivefold since Nadella took the top job. Moreover, despite COVID-19, Microsoft continues to drive profit growth. During the third quarter of 2020,  revenue increased by 12% year over year. This helped diluted earnings per share to rise by 32%. 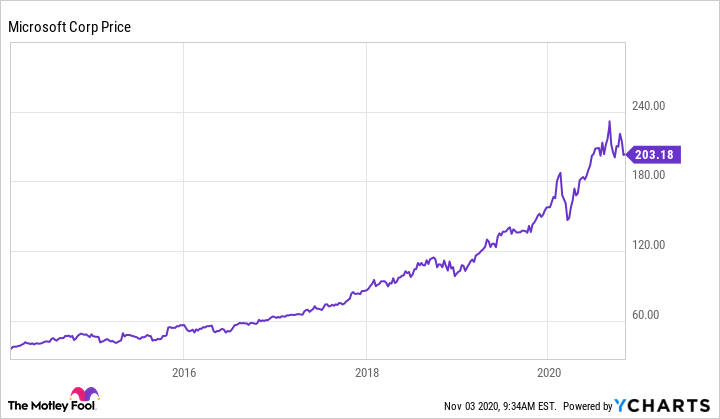 Still, despite these numbers, the company has warned of numerous business challenges, ranging from intense competition to cybersecurity concerns.

Also, Microsoft's forward P/E ratio stands at around 31. Analysts expect 12% earnings growth for this year and almost 14% next year. This means that Microsoft stock trades at a bit of a premium. However, with double-digit profit growth, the stock is less likely to drop.

The cloud industry remains too competitive for even Microsoft investors to breathe easy. Nonetheless, the company's cloud growth should continue at a brisk pace for the foreseeable future. 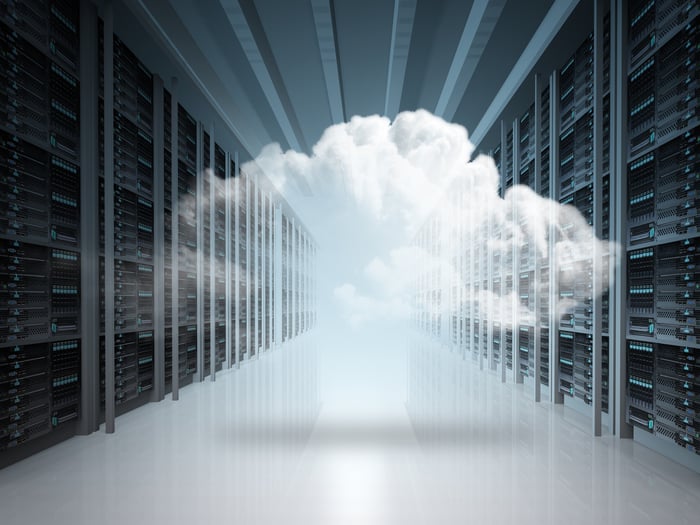 The state of IBM

In contrast, cloud success has not come as quickly for IBM. Arvind Krishna, who became CEO in April, is in a similar position as Nadella was when he became CEO. Like Microsoft in 2014, IBM is a stagnant legacy tech company struggling to redefine itself as a cloud play.

IBM has focused on the hybrid cloud, something that came about due to its acquisition of Red Hat in 2019. A hybrid cloud is a private cloud designed to work seamlessly with one or more public clouds. This allows workloads to move across multiple clouds to bolster capabilities and improve performance.

Despite that potential, the transition has not come quickly enough for some investors. In the most recent earnings report, the 3% drop in revenue was the third consecutive revenue decline, leading to massive selling in IBM stock. CFO Jim Kavanaugh also announced a $2.3 billion charge to its already strained balance sheet.  The cash will go partially to executing the spinoff of a declining business.

This spinoff will affect the infrastructure services business. which helps businesses administer and manage IT technology, as well as data and information. This business, now dubbed "NewCo," has experienced lower revenue despite a $60 billion backlog. Management believes NewCo can perform better as an independent company. It also believes the falling revenue will reverse course once the spinoff takes place in late 2021. IBM forecasts revenue increases in the mid-single digits after NewCo and IBM separate.

Such a move bodes well for IBM. Despite an overall drop in revenue, cloud revenue grew by 19% year over year in the most recent quarter.

Investors may also have an added financial incentive to consider IBM. The company's payout has increased for 25 consecutive years and now stands at $6.52 per share. This amounts to a yield of about 5.7%. Investors may also prefer the lower forward P/E ratio, which comes in at just under 10.

Additionally, IBM continues to make acquisitions and land new clients. The company also serves 47 of the Fortune 50 as it takes a leading role in the public cloud. As IBM's hybrid cloud continues to grow, it could become one of the leading companies in this industry.

Thanks to the likely growth in the cloud, Microsoft will probably continue to experience double-digit profit increases despite its upcoming challenges. Nonetheless, IBM appears positioned to offer more profit potential in the end. Investors can buy the company at a considerably lower valuation and collect a much larger dividend. Moreover, the success IBM has experienced with attracting clients bodes well for IBM's hybrid cloud offerings.

Admittedly, the NewCo spinoff brings uncertainty for now. However, once IBM is primarily a cloud company, it can reverse revenue declines and better support a much higher valuation. This should help both IBM and its stock rise into the cloud.