FireEye's (NASDAQ:FEYE) third-quarter results topped Wall Street's expectations as the company saw an increase in demand for its offerings in the wake of an increase in cyberattacks. The cybersecurity specialist also increased its full-year forecast, indicating that it is confident of sustaining the momentum.

But is this a signal for investors to buy a cybersecurity stock that has underperformed the market and its peers by a big margin? Let's find out. 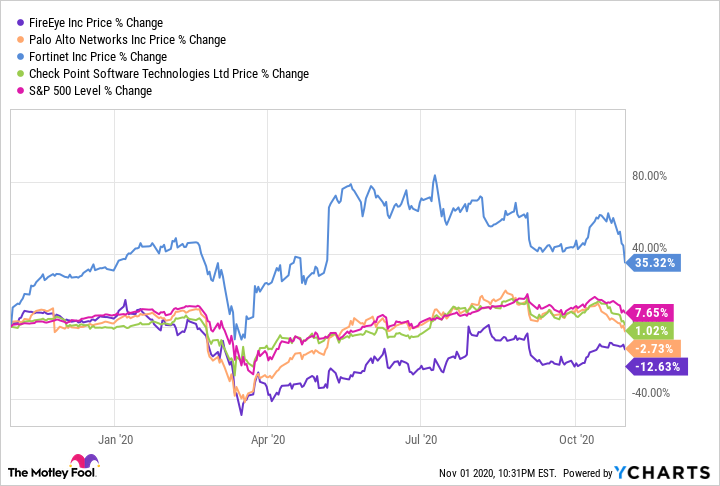 FireEye shows signs of a turnaround

FireEye's third-quarter revenue increased 6% year over year to a record $238 million. The company's net income, earnings per share, and non-GAAP operating income also hit records during the quarter, as FireEye saw a spike in transaction activity and sharp growth in its cloud and services business. "... there is an escalation of activity in cyberspace that's negative right now. There's an increase -- it's either an increase in attacks or increase in the impact of these attacks that's keeping us busy and probably many factors that are contributing to them," CEO Kevin Mandia said during the company's Oct. 27 conference call with analysts. FireEye delivered $0.11 per share in earnings during the quarter as compared to the prior-year period's $0.02. The company increased its full-year revenue guidance to a range of $930 million to $934 million, as compared to the earlier forecast of $905 million to $925 million. It now expects $0.29 in earnings per share for the full year, a nice bump over the earlier estimate of $0.24 per share.

Also of note, the company added 279 new customers during the quarter, the highest it has so far in the current fiscal year. It struck 45 deals valued at more than $1 million, which was again the highest so far this year and an increase over 37 such deals it closed in the prior-year period.

FireEye's non-GAAP operating margin jumped to 12% in the third quarter from 2% a year ago, easily eclipsing the company's original guidance of 7.5% to 8.5%. This sharp jump can be attributed to an improved product mix that saw the company generate 31% of its revenue from the platform, cloud subscription, and managed services segment as compared to 27% in the prior-year period.

This segment recorded 21% year-over-year growth in revenue last quarter, outpacing FireEye's overall top-line growth and offsetting the nearly 8% decline in product-related revenue. The company's professional services revenue also increased by just over 18% as compared to the prior-year period. FireEye's transition to a service and subscription-oriented model is starting to positively affect the company's margin profile. 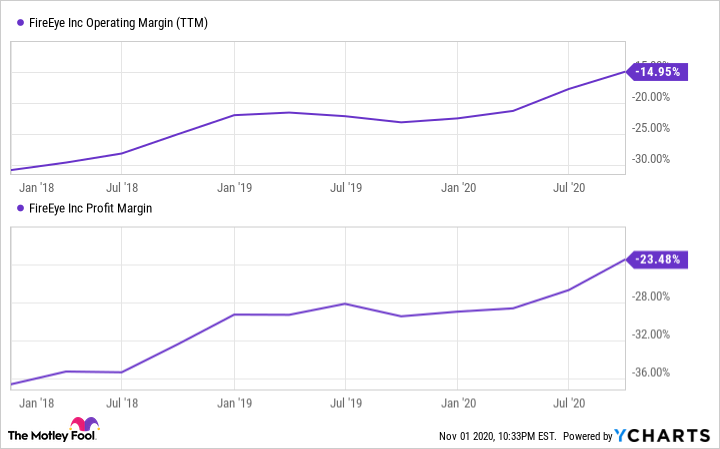 FireEye still gets nearly 46% of its revenue from the product-related business, while the remaining comes from the professional services and the platform, cloud subscriptions, and managed services segments.

The good part is that FireEye's billings from the cloud and services business is growing at a nice clip. These two businesses supplied 59% of the total billings (which refers to the sales billed during the quarter) last quarter, as compared to 45% two years ago.

Another important metric that moved north during the quarter was the length of its customer contracts. FireEye reported average contract length of 26 months for its recurring subscriptions and support business during the quarter, up from 24 months in the prior-year period.

The average contract length of the platform, cloud, and managed services business also increased to 26 months, up from 25 months a year ago, and a nice jump over the average length of 23 months seen in the second quarter.

FireEye is moving in the right direction. The cybersecurity player has been delivering stronger-than-expected results for a couple of quarters now, and it looks capable of sustaining that momentum thanks to an improving customer base, transaction value, and contract length -- all of which could help the stock deliver upside in the long run.