Sales of masks and other protective garments totaled $179 million in Hanesbrands' (NYSE:HBI) third quarter, enough to propel the apparel manufacturer's revenue ahead of analyst estimates. The core innerwear business also performed well, but the activewear business continued to struggle as the pandemic reduced demand for sports apparel. Hanesbrands' fourth quarter will be worse than expected due to the pandemic-related headwinds.

Hanesbrands reported total revenue of $1.81 billion, down about 3% year over year and $150 million higher the analysts expected. Excluding sales generated from the exited C9 Champion line and the DKNY intimate apparel license, revenue was up 2.6% adjusted for currency.

The innerwear segment was the star of the show, with total sales up 37% year over year. Much of that growth came from protective garments, but the segment still grew by 8.4% excluding that category. Positive point-of-sale trends and inventory restocking at retailers drove the sales increase.

Hanesbrands leaned on e-commerce during the third quarter, with total online sales soaring 70% year over year, excluding those exited lines. That figure includes sales through Hanesbrands' own websites, retailer websites, and e-commerce websites, as well as business-to-business sales. 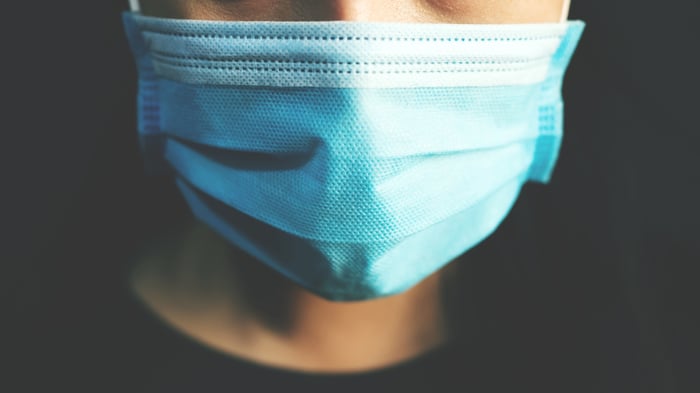 The pandemic is dragging on in the United States and Europe, which is a net negative for Hanesbrands. While the company expects to generate another $50 million from protective-garment sales in the fourth quarter, a full recovery for the activewear business will take some time.

Hanesbrands expects to generate between $1.6 billion and $1.66 billion of revenue in the fourth quarter, although this outlook does not include the potential impact of any lockdown or store-closing measures that governments may take in the coming months due to the pandemic. The midpoint of that range marks a 7% year-over-year decline, although sales will be down just 2% adjusted for the exited lines. Analysts were expecting sales guidance of $1.71 billion.

The bottom line will fare even worse, with Hanesbrands expecting adjusted earnings per share to tumble 39% from the prior-year period. The company said it's facing profitability headwinds, including some manufacturing issues and higher operating costs. The guidance range for adjusted EPS of $0.25 to $0.30 was well below the $0.45 analysts were expecting.

Hanesbrands is conducting a review of its business, although it provided no real details on its plans. The company did say that aspects of its strategy will become apparent in the fourth quarter.

A rough ride until the pandemic is over

Hanesbrands is making the best of a difficult situation, making up for lost sales by pivoting to protective garments. Sales of masks could outperform the company's expectations during the winter wave of COVID-19 that appears to be only beginning in the U.S., but retail store closures or simply lower retail traffic this winter due to the pandemic will cause some pain.

While Hanesbrands' profits will take a big hit this year, the stock is extremely cheap relative to its pre-pandemic earnings. The company produced adjusted EPS of $1.76 in 2019, putting the price-to-earnings ratio based on that figure around 7.5. That number is so low partly because shares of Hanesbrands had plunged roughly 18% by Thursday morning following the disappointing earnings report.

Hanesbrands' guidance shook investors' confidence on Thursday, giving long-term investors who can see the light at the end of the tunnel an opportunity to buy the stock at a discounted price. The pandemic will eventually end, and Hanesbrands' business will eventually recover. It's just a matter of time.