Like most apparel and footwear companies, Skechers (NYSE:SKX) saw sales massively decrease during the early phase of the pandemic. But the sneaker brand roared back in the third quarter, especially in China.

Getting back to ... second place

Skechers' sales declined 4% year over year to $1.30 billion in the quarter ended Sept. 30, but that figure was up almost 80% from the disastrous second quarter. Domestic wholesale grew 6.3% over the prior-year period, an important sign of progress for the recovery in its home market.

The company operates under a different model than competitors such as Nike, which leverages premium branding and industry-leading direct-to-consumer (DTC) channels to serve consumers. As a value brand, however, Skechers relies more heavily on wholesale distribution, which made up about three-quarters of revenue in the latest quarter. 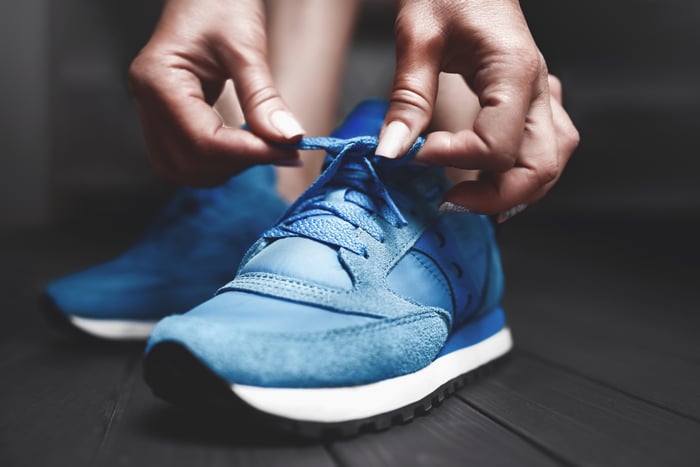 Its DTC business actually decreased 17% year over year, but the company is making some strides in this area. It opened 24 company-owned stores in the quarter for a total 3,770 globally. It launched a revamped website in July, and DTC was up 59% sequentially. Second-quarter digital sales grew over 400%, and while e-commerce growth decelerated in the third quarter, it was still up 172%.

As of Sept. 30, Skechers owns 522 stores domestically, compared to Nike's 240. The latter's DTC segment is largely dependent on the digital channel, which accounts for 30% of total sales. While Skechers doesn't specify digital's part of the total, it's clear that physical stores are still the main revenue driver.

Why China is so important

Sales in China grew 24% to reduce the overall decline. The European market was strong as well, increasing 18%, most notably in Germany, and Australia also grew by double digits.

China is a huge market and the primary source of growth for many global retailers. Nike grew revenue there as well in its fiscal first quarter with a 6% sales hike.

A Deloitte study found that the Chinese middle class is accumulating wealth and buying a more diverse set of products, providing a greater opportunity for companies to meet customer needs in that region. Skechers management declined to provide guidance for the remainder of the year, but they were pleased with the growth in China. CFO John Vandemore had previously said on the second-quarter earnings call that the company was "cautiously optimistic" about the recovery in China and very optimistic about long-term growth potential in that market.

A risk or an opportunity?

In the short term, at least, Skechers is a risky play. Even during the early days of the pandemic, when consumers were reining in their spending, the company's value offerings didn't see elevated demand. And as customers are back in stores and also shopping online, premium rivals are outperforming the company. But strong management and a well-carved market niche mean that long term, sales should keep rising.

Skechers stock is down 27% year to date as of this writing with a sizable chunk of that decline tied to the third-quarter report. It has underperformed the broad market in recent years, but the company was on the right path before the pandemic, and as it continues to see improving sales, especially in its international markets, the stock should bounce back too.