Beyond Meat (NASDAQ:BYND) went public at $25 per share last May, and trades at about $150 per share today. Let's see why everyone is talking about this plant-based meat maker, and why its sizzling stock might attract even more bulls in the near future. As a result, Beyond Meat enjoys a first-mover's advantage in this nascent market, and its growing list of partners -- including Yum Brands, Starbucks, Costco, and Walmart -- are making it a household name.

Wall Street expects its full-year revenue to rise 61%, with its first full-year profit. Next year, analysts expect its revenue to rise 56% and its earnings to grow nearly fivefold. Those explosive growth rates make it tough to tell if Beyond Meat's stock is overvalued at 256 times forward earnings and 13 times next year's sales.

Piper Sandler's latest "Taking Stock with Teens" survey, which polled over 9,800 U.S. teens regarding their favorite brands, found that 18% of respondents had tried plant-based meat products. 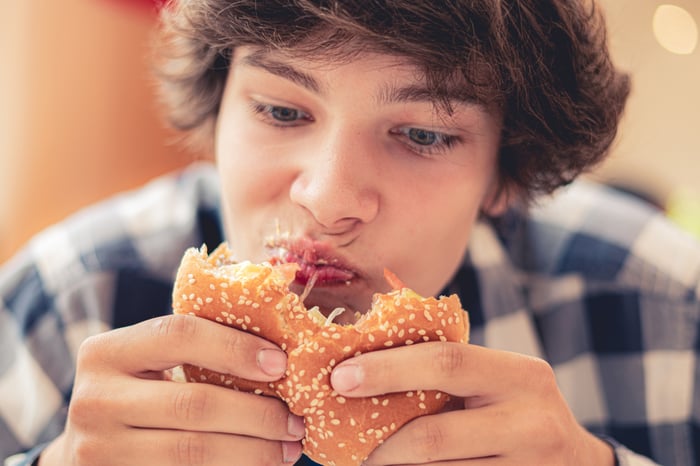 But those teens chose Impossible Foods, not Beyond Meat, as their favorite brand of plant-based meat. That preference indicates Beyond still needs to widen its moat against Impossible, which is also expanding rapidly via partnerships with companies like RBI's Burger King.

Nonetheless, Impossible Foods CEO Pat Brown recently told CNBC that there's still plenty of room for both Impossible and Beyond to expand without trampling each other, since the two companies still "share less than 1% of the U.S. market for ground beef."

Therefore, Piper's survey suggests Gen Z's appetite for plant-based meat will continue growing, and allow both Beyond and Impossible to gain ground against traditional meatpackers like Tyson Foods.

4. It's well insulated from macro headwinds

Most meatpackers struggled during the COVID-19 crisis as the pandemic shut down their plants and disrupted logistics networks. Those disruptions caused meat shortages and inflated market prices, and many retailers limited the amount of meat products each customer could buy.

Beyond Meat didn't struggle as much with those disruptions, since its products were created in labs without living animals. It experienced a steep downturn in foodservice sales in the first half of the year as restaurants closed down, but its higher retail sales offset that decline.

Beyond Meat is gradually expanding its presence in China, but it doesn't generate much revenue there yet -- though it also shouldn't be a major target if the trade war escalates between the U.S. and China. The company still generated 80% of its revenue from the U.S. in the first half of 2020.

Beyond Meat is a hot stock right now, and it could remain volatile for the foreseeable future. But I don't think plant-based meat is a fad, or that Beyond's stock is too expensive relative to its long-term growth potential.

The plant-based meat market could still grow at a compound annual growth rate of 15% between 2019 and 2025, according to research firm Markets and Markets, as leaders like Beyond Meat and Impossible pull diners and shoppers away from traditional meat products.

Since Impossible Foods remains private and doesn't plan to go public anytime soon, Beyond Meat remains the easiest way to invest in this booming market. Investors who are still sitting on the fence should see if the company reveals more information in its third-quarter report on Nov. 9.