The cloud banking software stock has seen some big swings since its IPO.

Shares of nCino (NCNO) slumped 11.5% in October, according to data from S&P Global Market Intelligence. The stock pulled back in conjunction with a secondary public share offering early in the month, and it went lower at the end of the month's trading amid a sell-off for the broader market. 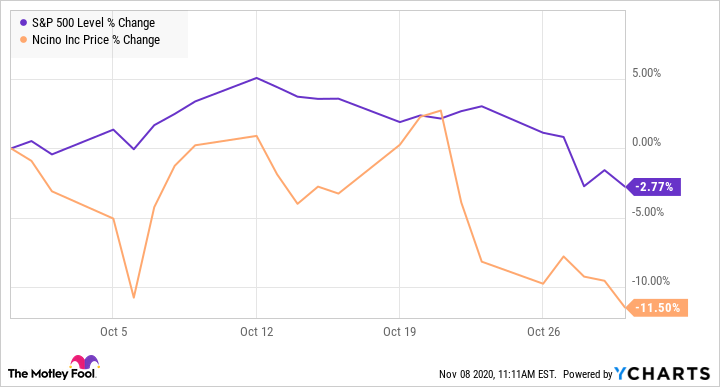 nCino's stock decline last month's sell-off followed a 14% dip for its share price in September. The stock is still up 147.6% from its initial public offering (IPO) price of $31 per share, but shares have lost ground over the past few months. nCino had its initial public offering in mid-July, and the the stock is now down roughly 16% from its price at market close on the day of its debut.

nCino announced an offering of 5.5 million shares on Oct. 5. Two days later, the banking software company announced it was expanding its secondary offering to 6,706,944.

The market appeared to have mixed sentiments about the share offering at the beginning of October, and the stock went on to post movements in conjunction with the broader market for much of the month. Many growth-dependent tech stocks saw significant sell-offs in the late-October market pullback, but nCino has also taken part in the market's subsequent rally.

nCino stock has bounced back amid momentum for the broader market in November. Shares are up nearly 11% this month so far. 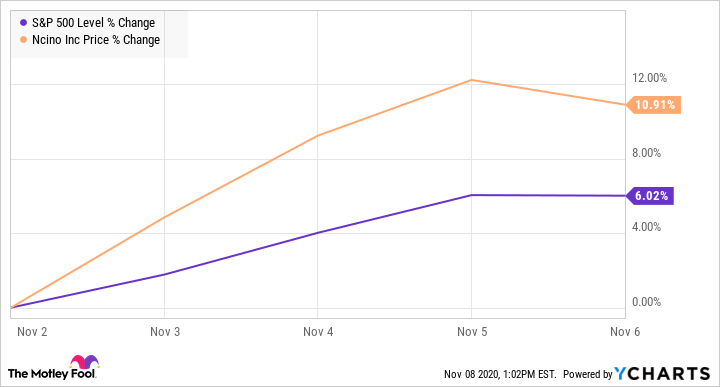 For the third quarter, nCino is guiding for sales between $49 million and $50 million and a non-GAAP (adjusted) loss per share between $0.09 and $0.10. For the full-year period, management expects revenue to be between $193 million and $194 million. The fintech company's adjusted loss for year is projected to come in between $0.25 and $0.26 per share.

nCino has a market capitalization of $7 billion and is valued at roughly 36 times the company's target for this year's sales.

Why nCino Stock Fell 14% in September

After Its First Post-IPO Quartely Report, Is nCino a Buy?
413%