Shares of Aurora Cannabis (NASDAQ:ACB) fell 13.2% during the month of October, according to data from S&P Global Market Intelligence. The Canadian cannabis company has seen its stock decimated this year, as oversupply in the Canadian market, disappointing overseas sales, a rampant black market, and a balance sheet in need of repair have all conspired against it.

Even though the stock had already fallen by a huge amount this year, and did again after a disappointing September earnings report, the stock took yet another tumble in the month of October as the company said it would be selling more stock. 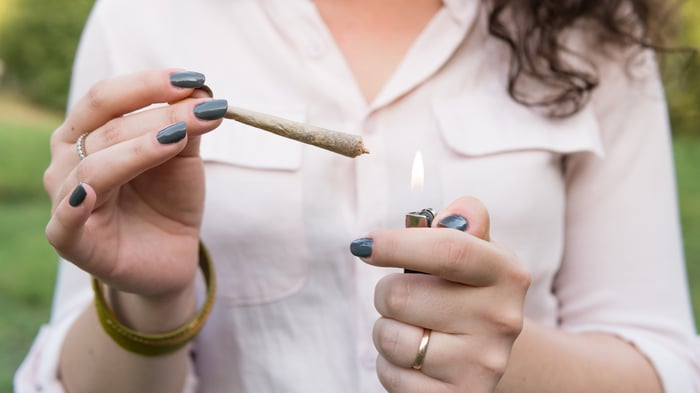 In late October, Aurora filed a press release saying that it would sell either "common shares, preferred shares, warrants, subscription receipts and debt securities" worth some $500 million over the next 25 months. Since Aurora's market capitalization was only around $500 million at the time of the announcement, it meant that current shareholders could be diluted by about 50% in the months ahead as the company tries to replenish its balance sheet amid negative earnings and cash flow. What's troubling is that Aurora had already completed a $250 million at-the-market stock offering, and still felt the need to go back for more.

Amazingly, Aurora has rocketed 50% on Friday, Nov. 8 in the wake of the U.S. election, probably the result of a short squeeze and the prospect of marijuana legalization in the U.S. However, investors may be getting ahead of themselves. It's not a sure bet that Democrats will take the Senate or that federal cannabis legalization is coming -- although several individual states did vote to legalize cannabis on Nov. 3.

Even if legalization does happen, it doesn't mean every cannabis company will be successful; Aurora will still have to compete against several vertically integrated operators already competing successfully within individual states.

Investors should take care to look realistically at Aurora's current financial prospects, which appear quite dim, rather than speculating on "what-ifs" in U.S. cannabis policy.