Tesla's (NASDAQ:TSLA) Q3 2020 earnings call was packed with lots of goodies, with CEO Elon Musk calling it the company's "best quarter in history." While revenue came overwhelmingly from its automotive business, its energy business began to show real signs of a pickup.

Musk has said in the past that he expects the company's energy business to grow to "roughly the same size" as its automotive business, so let's take a look at how Q3's results align with that vision and how the company's investments in energy may contribute to the company's bottom line. 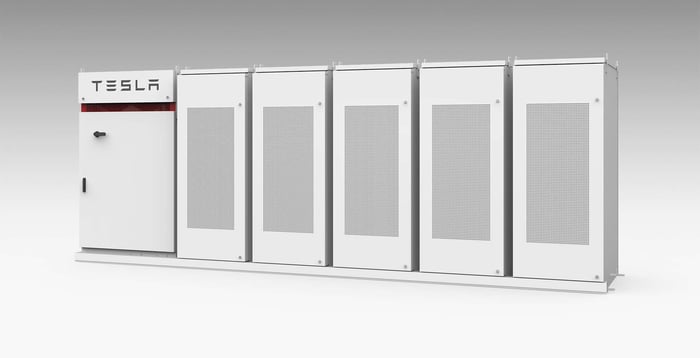 Tesla's energy business is made up of its rooftop solar-installation business and its stationary storage, or battery, business. During Q3 2020, Tesla shipped 759 megawatt-hours (MWh) worth of batteries, an 81% increase from Q2's 419MWh. In contrast, its automotive shipments for Q3 were 139,593 units, a sequential increase of 54% over Q2's 90,650 units.

The acceleration in Tesla's storage business can be best appreciated in the chart below. It shows automobile units shipped (left axis) vs. MWh shipped (right axis):

After a several-year decline in its solar shipments, the company has taken a much more aggressive stance, dropping prices, streamlining its offerings, taking its sales online, and beginning to pilot its many-times-delayed Solar Roof product. And the market appears to be taking notice.

Solar shipments increased by 111% from Q2. This is over double Tesla's 2019 Q2 to Q3 increase of 48%. This is noteworthy, especially in a year when the industry, as a whole, is expecting a 25% decline in rooftop solar installations because of COVID-19.

While the company didn't provide any hints of where its solar business is going in Q4 2020, it appears to be stabilizing. The chart below shows this, with MW deployed on the left and automobile units delivered on the right:

Tesla's energy business is not yet very profitable

During the earnings call, Musk described Tesla as a "whole chain of start-ups." While there are clear signs of top-line growth in Tesla's energy business, it generates very modest gross profits at this time. Buying market share may be a perfectly good strategy if a company believes that something will happen in the future leading to healthier margins and profits. And the company's storage business may do just that: Musk announced a number of product enhancements during its battery day on September 22 that should lower the costs of key storage components by up to 56% within three years. This kind of cost reduction may help improve the company's energy margins.

An automobile-sized energy business not yet around the corner

Achieving parity between Tesla's automotive and energy businesses would go a long way to justify the company's current lofty valuation. However, because Tesla's automobile business continues to grow at a very healthy clip, it's energy revenue would need to be in ludicrous mode to catch up-- that is, it will need to accelerate much faster than its automobile revenue, probably for several years. We're not yet seeing a clear path to achieve this, as Tesla's automobile revenues are so much larger, standing at almost 87% of total revenue, versus under 7% coming from its energy products: 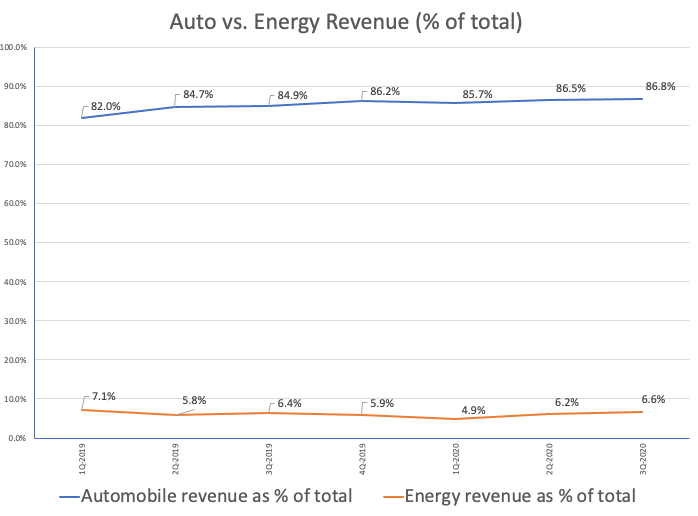 The company didn't provide guidance about its automotive and energy forecast for 2021 but acknowledged a range of where they may be headed: Its automobile shipments may grow between 70% and 100% next year, while its storage shipments alone are expected to grow 100%. The additional significant growth in its energy business will need to come from its solar segment. Tesla acquired its solar business from SolarCity in late 2016. SolarCity's business essentially collapsed under Tesla, going from about 40% share of the US market pre-acquisition, to about 5% by the end of 2019. The reasons are plenty, but mostly its solar products have lacked a competitive edge, with its Solar Roof rollout being delayed multiple times. Perhaps for this reason, the company just hasn't seemed very focused on rooftop solar, until now.

In addition to dropping the prices of its standard solar offering, Tesla has begun to pilot its Solar Roof product and claims that its main bottlenecks to achieving scale are logistics and training. So there's potential here, but we're at least a few more quarters away before we can say for sure whether the growth of Tesla's energy business is on track to overtake that of its autos.

Investors looking to add Tesla to their portfolios have plenty of reasons to feel good about the company's achievements in the energy space. However, they should probably be more cautious about expecting Tesla's energy business growing to parity with its automobile business anytime soon -- at least until its Solar Roof product begins to capture a meaningful share of the solar market and the company starts producing batteries that are a lot cheaper to make. Until then, Tesla's valuation will continue to be dominated by its achievements in its automobile business.